In April 2022, NZAEL published the most recent round of enhancements to the genetic evaluation of dairy bulls.

These enhancements include an improvement to the liveweight breeding value evaluation and the introduction of Udder Overall to the Breeding Worth (BW) Index.

The conformation and strength of udders has been of increasing importance to New Zealand dairy farmers, with many farmers seeking a stronger selection effort on functional traits related to cow longevity and robustness. Based on farmer feedback, udder conformation has been highlighted as a priority due to increasing per cow production.

What changes have been made?

Liveweight is included in BW to ensure that genetic improvement in production traits is resulting in cows who have improved production per kg of liveweight, i.e. cows who produce milk more efficiently. The updates to the liveweight evaluation have resulted in breeding values that are more reflective of mature liveweight than the previous evaluations.This improved accuracy will provide more effective selection for production efficiency in the national dairy herd.

What impact can we expect from these changes?

Breeding Worth is calculated by combining breeding values (BV) with the relevant economic values (EV). There have been no changes to the economic values for the eight existing BW traits. All changes in BW for the April release are due to re-ranking from the liveweight breeding value update or due to the addition of the udder overall trait to BW. 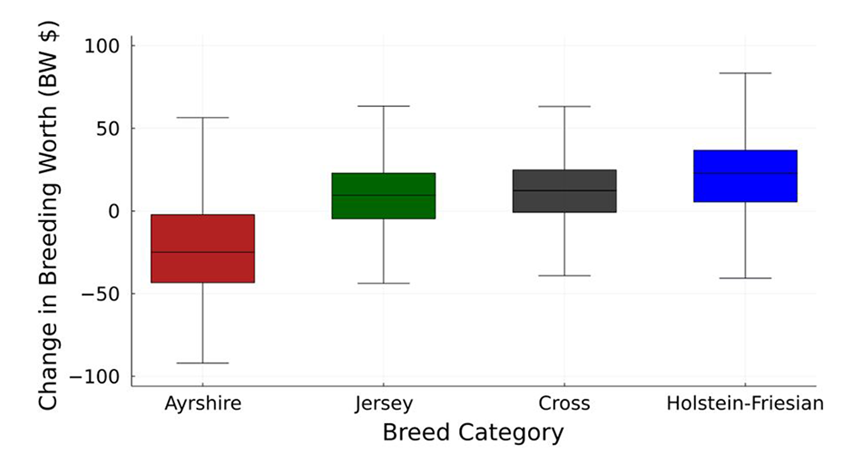 The average change in BW for bulls born after 2010 with a BW reliability of at least 75%.

If you have queries regarding BW changes in your individual herd, please do not hesitate to get in touch with you breeding company.

The purpose of all development to the animal evaluation system is to provide farmers with more accurate and meaningful information to help determine breeding choices.

With this in mind, all developments are rigorously tested by the Farmer Advisory Panel (FAP) and internationally peer-reviewed by the Scientific Advisory Committee (SAC) before final sign-off from the NZAEL board.

LIC and CRV are working closely with NZAEL to incorporate the latest enhancements from NZAEL into their in-house genomic evaluations, MINDA and MyHERD reporting systems.

There are more improvements coming through the NZAEL peer-review pipeline in 2022.

NZAEL is planning to deliver improved breeding values for the Calving Difficulty (a.k.a. Calving Ease), and Gestation Length. Although these two traits are not included in BW, they both provide important extra information when selecting bulls to use in the herd.

NZAEL continues to progress towards the NZAEL 3.5 model which will include genomic predictions.

Breeding Worth (BW) is the index used to rank cows and bulls on their expected ability to breed profitable, efficient replacements.

Breeding Values (BV) reflect our knowledge of a cow or bull's genetic merit for a trait.

Economic values (EV's) are an estimate of the dollar value to a NZ dairy farmer of a unit change in each trait.

For all traits, reliability indicates the confidence that an animal’s BW or individual breeding values are a measure of their true merit.

NZAEL 3.0 Queries
If you have a query that isn't answered in our web pages, please email support.nzael@dairynz.co.nz. Include an identifier for any animals in your enquiry along with your contact details. We will respond as promptly as possible.