A change to how mating data is treated within the fertility model has improved the reliability of the fertility Breeding Value (BV) allowing farmers to be more accurate in their selection of genetically elite replacement heifers.

The transition of the animal evaluation (AE) system from LIC to DairyNZ created an opportunity to thoroughly review how each of the AE models process data from herds. This review found that a proportion of mating data is entering the fertility model in a sub-optimal way. Correcting for this has strengthened the AE system.

Importance of using all mating data

A cow's performance during mating is compared to that of her herd mates or peers (her contemporary group). It is important that all of the available mating data is used, so that the following can be achieved.

If no mating record is received for a cow, her peer group needs to be determined, so that she can be compared against them. 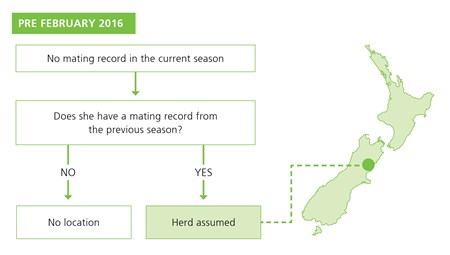 The AE system used a cow’s mating information from the previous season to determine her peer group.

Given that a number of cows will change herds from one season to the next, and almost all heifers will not have a mating record from the previous season, this methodology was not ideal.

How has it been corrected?

If no mating record is received for a cow, it is now assumed that she has remained at the location of her last calving, and this is the peer group that she should be compared against.

As a result, many more cows will be compared against their correct peer group.

What is the impact?

The impact of this correction is most visible among young bulls, whose daughters calved for the first time this season. This is because if their daughters failed to present for mating this season, they would be unlikely to have a mating recorded in the previous season.

The bulls who get a lift in their fertility are those who had a very high proportion of daughters presented for mating. This is because previously their peers who had poor reproductive performance (did not present for mating at all) were removed from their peer group. This had the effect of raising the average performance of the group, which meant that the true merit of the ‘good’ cows was underestimated.

Note: This correction has had the greatest impact on the fertility Breeding Value; however, to a lesser degree all breeding values that make use of mating records will be affected. This includes Calving Difficulty, Gestation Length Total Longevity and Residual Survival.

Learn how to get the most value out of the Animal Evaluation tools and information.