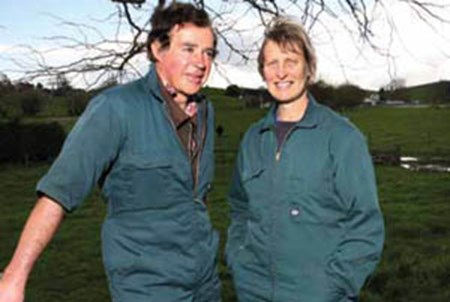 The automated calls, triggered from a high somatic cell count (SCC) in their milk, have stopped since the couple made changes to dramatically reduce the incidence of mastitis in their split calving herd.

A high bulk milk SCC usually indicates a high level of mastitis in the herd. In the 2010/11 season the Andersons had an average SCC of 300,000 cells/ml and had accumulated nearly $1000 worth of demerits.

Dairy companies give grades or demerits to suppliers with high counts (usually above 400,000 cells/ml).

Stewart thought a high incidence of mastitis in spring and a high cell count throughout the season was normal, until a meeting with their vet and good friend Joyce Voogt.

Joyce used DairyNZ's SmartSAMM gap calculator to work out that mastitis could be costing the Andersons up to $30,000.

This set a plan in motion which would see the Andersons halve their SCC and find a new normal for mastitis.

“More or less all my life, we have always had a lot of mastitis at calving and I considered it to be quite normal,” says Stewart.

The Andersons employ two full-time staff and milk 400 crossbred cows on their farm in Otewa, near Otorohanga in the Waikato.

Stewart grew up in the small rural community which once boasted the first Farmers Trading Company outside of Auckland, a church and a blacksmith. Now it is just the school that remains.

Stewart promised as a young boy to buy the land from the previous owner who farmed opposite his father’s farm ? a promise he made good on in 1985.

The farm has allowed him to follow his passion of breeding the best cows in New Zealand. The Andersons sell high breeding worth (BW) heifer replacements and also bulls to artificial breeding (AB) companies.

“It’s not what you’d call an average farm, as we do things a little bit differently. Most dairy farms get 95 percent of their income from milk sales, on our farm it’s about 60 percent and my mission is to make it less than the stock sales.”

If asked, Stewart can rattle off the names, progeny and the genetic merit of his best cows and also has a number of records to talk of. Last year, for example, they had seven bulls in Premier Sires.

“I was relatively happy with the production of our cows and mastitis was a bit of an irritation but it wasn’t too much of a concern,” says Stewart.

“Our cows would calve and they are straight into it. That’s why I accepted mastitis, because we still had high production.”

That changed once Joyce, with an independent view, said that mastitis levels could be a whole lot better and suggested the Andersons call on vet Jess Shelgren, from Vet Focus, to help them formulate a plan.

There was a lot of environmental mastitis, so the first thing Jess did was look at what was happening during milking.

She went to the Andersons' farm and immediately spotted one of the issues.

“When Jess turned up, straight away she saw a spray of water and realised where the first problem was, so that was interesting,” says Stewart.

“We had a couple of bad habits. I was guilty of one, which was washing down the rails while the cows were still on the platform. I used to try and keep things clean. Other people were guilty of using a high pressure hose to shift them off and getting them nice and wet and, of course, when they are dirty, everything drips down their udders.”

One of the other problems identified in the shed was the teat sprayer. Jess found that a lot of the cows had dry teats, which indicated they were not sprayed enough.

To counter this, the teat spray was changed to include more emollient and the amount of teat spray increased. Boards were also put on the side of the race to reduce wind problems affecting the automatic teat sprayer.

For the first time, pre-calving heifers were treated with internal teat sealant.

“We teat seal the heifers because we always had a lot of trouble with mastitis in our heifers. So all first calvers get teat sealed and the older cows get dry cow therapy and teat seal at dry off.”

Heifers were also trained before calving, to get them used to the shed. This was an idea first introduced to Stewart at a Dairy Product Systems (DPS) course held by Sue Macky and Brian McKay.

By having these cows in the shed early, they were able to be teat sprayed ahead of milking. Colostrum cows were also teat sprayed on the platform and through the automatic teat sprayer.

Calves are also now picked up twice-a-day. “The calves will suck anything in sight, they suck mud on the cows leg, then they will get mud on the teat, so we wanted to get them off as soon as possible,” says Stewart.

“We pick up the calves twice-a-day instead of once-a-day and we tube feed all the calves with colostrum.”

Herd testing is also part of the new plan.

“We herd test every month, with the exception of August, and then go through those herd test figures. Any cows with a high cell count will be given a rapid mastitis test and if we find any problems and we see clots, we will treat them.”

Most of Jess’s recommendations were followed, with one exception. “We actually did most things that Jess suggested with the exception of wearing gloves. I like putting my hands on cows, so I refuse to wear gloves.”

When staff were introduced to the plan, they initially thought there was going to be a lot of extra work, says Stewart.

“At the end of the season they said ‘well, let’s do it again’ because it’s actually less work, especially around calving time.

“It was not one action, but many small actions, and the motivation of the entire team that made the plan work.”

By identifying the problem, creating a plan and carrying it out effectively, the Andersons now have one less stress in life, with far less mastitis.