Taking part in a regional project has paid off for a Bay of Plenty farm, with clinical mastitis rates dropping by 84 percent - giving other farmers encouragement that mastitis can improve on their farms too. 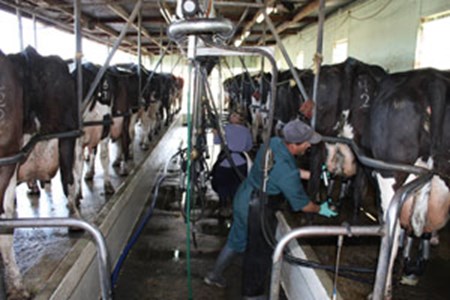 The project, led by DairyNZ developer Phillipa Hedley, is conducted by Bay of Plenty Focus on Dairying (BOPFOD), a farmer action group which initiates projects on critical issues facing dairy farmers within the eastern Bay of Plenty. Doug and Beth Leeder’s Opotiki farm is one of eight case study farms where BOPFOD provides support to reduce the incidence of mastitis and progress is reported to farmers in the region.

The key driver to improving mastitis was found to be the motivation and attitude by the owner and staff.

DairyNZ consulting officer for Whakatane, Cameron Bierre, says the positive results are good for the region. “There is no reason why the success the Leeders achieved can’t be mirrored by other farmers in the area, by putting management practices in place that are followed by everyone on the team,” says Cameron.

“Mastitis can be reduced as it is a management disease not an infectious disease. BOPFOD helped identify that the level to which it is controlled is largely driven by the attitude of the owner and by the motivation and stockmanship skills of the person milking the cows.

“Mastitis reduction for the 2012 season starts now. Work with a trusted expert to develop a planned approach to reduce mastitis.”

“The reduction took real dedication and focus, especially around management of the colostrum cows,” says Cameron.