There are many options available to improve the health of our waterways. This page will help you understand the actions you can take.

Signs: Stock on paddocks during wet periods, ponding and overland overflow, collections of dung in areas of a paddock prone to overland flow/flooding, ruts from vehicle movements, slips or slumps, extensive pugging.

Pathway to water: Runoff into water and direct deposition.

Signs: Effluent, or water containing effluent, running off to channels that lead to water or directly to water. Effluent accumulating in areas where cows congregate.

Pathway to water: Runoff into water and direct deposition.

Pathway to water: Runoff or leaching. Saturation of soils can lead to pooling and runoff. This can occur for several reasons, for example: if infrastructure is not well maintained, if effluent is applied at a rate or depth that is too high.

Contaminant: N, P and faecal bacteria
Pathway to water: Runoff due to poorly maintained infrastructure, leaching due to unsealed storage.
Signs: Overflow of sump or ponds, pond level lowering without discharge indicates it may be leaking, vegetation on the surface which may cause blockages and system failures. Yards with cracked concrete.

Pathway to water: Runoff or leaching if effluent is not effectively captured

Contaminant: N, P, faecal bacteria and sediment, depending on if the crop is grazed or harvested. Winter crops are particularly risky for nutrient and sediment loss.

Signs: Effluent or sediment running off into water during grazing off crop. Heavy rain washing soil off cultivated areas. Build-up of dung or disturbed soil in areas with the potential to run off. Stock on paddocks during wet periods, ponding and overland flow, collections of dung in areas of a paddock prone to overland flow/flooding, ruts from vehicle movements, slips or slumps, extensive pugging.

Pathway to water: Runoff from stack or leaching below the stack.

Contaminants: Depending on the fertiliser, could be N and/or P

Pathway to water: Runoff or leaching if fertiliser is expose to elements.

Contaminants: Depending on the fertiliser, could be N and/or P

Pathway: Runoff or leaching if fertiliser applied in inappropriate amounts, locations, or times.

Pathway to water: Runoff if the pit is in a location where water can run in and out or leaching if the pit is located within the groundwater level or not adequately compacted.

Signs: Water in the bottom of the pit, water flowing in or out of the pit.

For further detail in how nutrients are lost to water bodies click here.

Esherichia coli (E.coli) bacteria normally live in the intestines of healthy people and animals, the occurrence of E. coli is used as an indicator of faecal matter in waterways. E. coli and enterococci are indicators of human health risk from recreational contact with fresh water and marine water. They indicate the possible presence of pathogenic (disease-causing) bacteria, viruses, and protozoans that also live in human and animal digestive systems. Therefore, their presence in water bodies suggests that pathogenic microorganisms might also be present and that swimming and eating mahinga kai might be a health risk.

Faecal matter also has some other water quality implications which are explained in the following table. It is very likely that central government will require regional councils to set limits around faecal matter concentrations in all New Zealand bodies to amounts that allow secondary contact recreation activities (which includes activities such as fishing and tramping) to still occur.

Sources and potential impacts of excess faecal matter (and other bacteria) 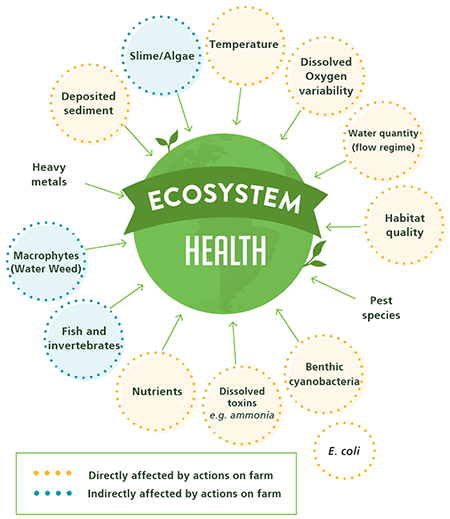 There are many options available to improve the health of our waterways. This section will help you understand what contributes to good water quality and possible actions to take.
Thank you for submitting your opinion
Sorry, we could not process your request at this time. Please try again later.