Michael Shearer is an ideal candidate for DairyNZ's Tiller Talk programme because the thing he likes best about dairying, even more than the cows, is pasture performance and calculating the numbers. 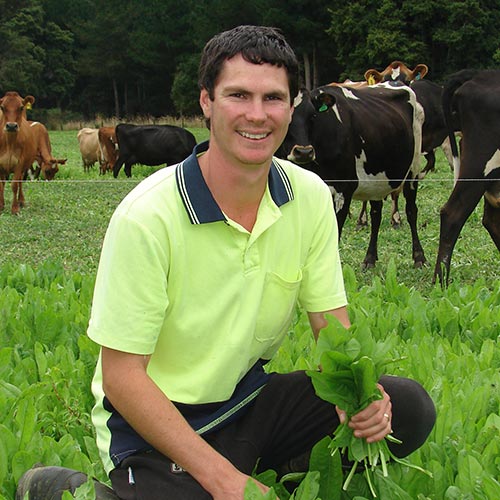 Getting the best out of the soils and pasture has been a tough challenge on the 160ha farm near Nelson where he and his wife, Cheryl, are sharemilking with their 415-cow herd. Flats with partial irrigation rise to reasonably steep hills and until they arrived a couple of years ago there was no pasture renewal programme in place.

Last year he planted 14ha in chicory as a summer crop which was then sown with diploid-tetraploid perennial ryegrass mix on irrigated paddocks and a spreading-diploid PRG mix on dryland paddocks. This year 25ha – 15% of the entire farm and 30% of the flats – went into chicory on irrigated paddocks which will be followed by the hybrid ryegrass.

The plan is to regrass the flat land every three years, with chicory followed by hybrid ryegrass, to try and get the most out of the irrigated land and compensate for the poorer pasture on the hills.

The flat land could be seen as the low hanging fruit – where the greatest, most reliable returns could be achieved.

Michael keeps great pasture records and all of his decisions are based on data – solid facts on what paddocks were growing, what they grow once renewed and the costs involved.

Until now, the herd has been eating 9.9t DM/ha of pasture a year and Michael estimates the new pastures are adding between three and four tonne to those paddocks compared with older grass of similar contour. It will also be significantly higher in metabolisable energy (ME).

“If you get the pasture management right then everything falls into places: cow health, production, and financials.”

Born in Whangarei, and raised on a lifestyle block near Nelson, Michael started dairy farming at 16 to earn money for his pilot’s licence but soon realised farming was an enjoyable and promising career.

After four years dairying near Nelson, he and Cheryl moved north in 2013, and he was judged 2014 Taranaki Farm Manager of the Year in the NZ Dairy Industry Awards. The Shearers returned to the South Island for the start of the 2015/16 season.

It’s his enthusiasm for pasture management that led Michael to his involvement in Agriseeds’ Grass into Gold programme – a predecessor to DairyNZ’s Tiller Talk. He has enjoyed gaining access to experts through the project.

“I wanted to get in touch with agronomists and plant researchers to get the best out of grass production and assist me in my knowledge of pastures.”

Farm at a glance

Want to increase your profit through better pasture management? Join DairyNZ's Tiller Talk.
Thank you for submitting your opinion
Sorry, we could not process your request at this time. Please try again later.