Exciting times are ahead for Robert Buchanan, who took over the management of a Taranaki 84ha farm near Inglewood last June. 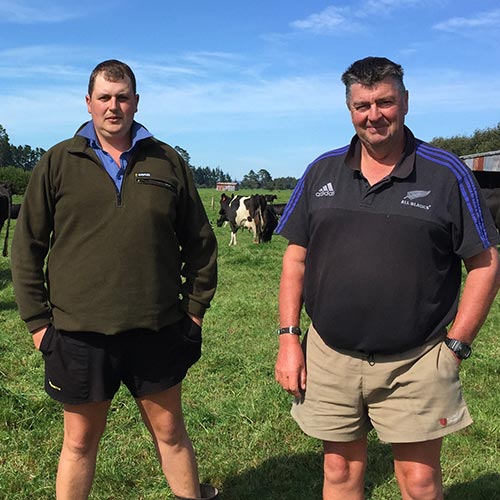 Robert’s parents, George and Leigh, bought the property nine years ago; before that they had farmed sheep and beef.

Robert has identified plenty of opportunities on the farm.

“We want to get more from less,” says Rob, who knows good pasture management is key to achieving low-cost pasture production.

Rob manages the farm on a day-to-day basis with George available to bounce idea off and to step in as a relieve milker.  George’s philosophy is to farm profitably and sustainably moving forward and passing a healthy business to the next generation.

Rob, 27, took the opportunity of stepping in last year after five years working as Technical Field Representative near Darfield. Before that, he completed an Ag. Commerce degree at Lincoln University.

Rob looks to the future with ambition.

The pair aims to meet their target production of 1430 kg MS/ha as long as they maintain a high level of profitability. “We know we can only achieve our goal by having better cows and grow better pastures,” says Rob.

Rob contracts someone to do weekly pasture assessments.

“Once the contactor has finished measuring each paddock, the data is automatically downloaded onto my computer and my feed wedge is produced instantly,” Rob says.

Growth rates are critical to Rob and George.

“It is our biggest tool when it comes to pasture management. I wouldn’t go back,” says Rob.

The farm is located in a high rainfall area, where about 2000mm falls per year, and winters are typically long and wet.

Joining Tiller Talk to them means they will gain access to expert advice and the opinion of like-minded farmers.

The Buchanans are trialling and measuring weekly (with platemeter) four perennial ryegrass cultivars as part of the DairyNZ On-farm Cultivar Proving Scheme. “Looking at the different cultivars with the Tiller Talk group and getting expert knowledge on the ‘why’ they perform differently should also be great value for everyone.”

Rob and George are excited to share their learnings with and get support from like-minded farmers who are pasture first like them.

Farm at a glance

Want to increase your profit through better pasture management? Join DairyNZ's Tiller Talk.
Thank you for submitting your opinion
Sorry, we could not process your request at this time. Please try again later.