Clover is a high-quality feed. There are a number of clover species available with white clover and red clover the most commonly used.

White clover is perennial forage legume important in New Zealand dairy pastures. It is grown throughout New Zealand and performs well on moderate to highly fertile soils, but being summer active can be less productive and persistent in dry situations.

White clover has three characteristics that make it an ideal companion species to ryegrass: 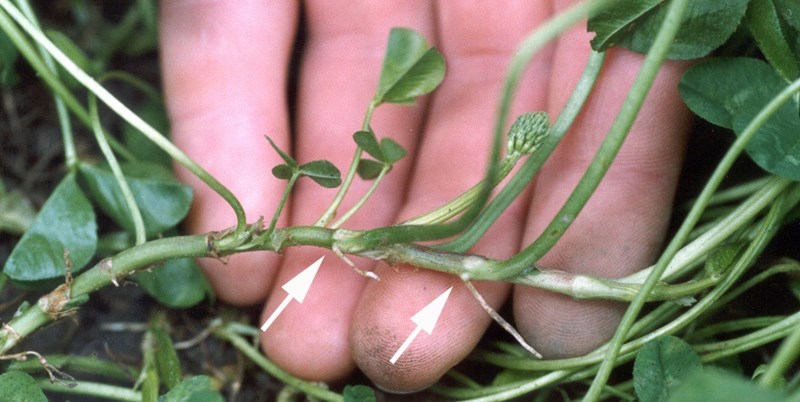 A clover stolon has a number of growing points along it as indicated (by white arrows). A high number of stolon growing points improves persistence, as each has roots and is a potentially a new plant.

Good grazing management (grazing at the right time and maintaining consistent grazing residual) allows light into the base of the pastures to prevent shading and promote white clover growth. This is particularly important in mid-late spring, as white clover has little winter growth and is slower to start growing in spring.

Large-leaved: cultivars grow taller and more upright, have thick stolons and robust roots. They tend to be higher yielding, but have fewer stolon growing points and less capacity to regenerate and persist. For this reason they typically sown mixed 50:50 with medium-leaved cultivars.

Medium-leaved: cultivars are intermediate in features. The original Grasslands Huia was widely sown, but has now been superseded by a range of modern cultivars with higher yield potential and better robustness through much greater stolon densities. Medium-leaved types perform well under a range of grazing managements, and are typically mixed 50:50 with large-leaved types when sowing dairy pastures.

Small-leaved: cultivars are generally not used for dairying. They are low growing, lower yielding, and their low-growing habit makes it difficult for dairy cows or calves to graze them. They are best suited to sheep grazing.

White clover is usually sown as a part of mixed sward pasture, where its DM yield varies from < 1 t up to 7 t DM/ha/year. On new dairy farm conversions where soil N concentration is low and reserves have not yet been created with organic matter, white clover contributes significantly to DM yield, but its contribution in developed farm situations is seldom over 30% at a single grazing and often much less.

In contrast animal performance from pastures improves markedly with increasing clover content, up to 50% or more, so is highly desirable to maximise clover content for high cow performance.

Research has shown clover can survive in pastures with up to 200 kg N/ha/year of fertiliser N when pastures are very well grazed and the clover stolons are not subject to excess shading.

White clover is generally sown in a pasture mix at 3-4 kg/ha, usually a mix of two cultivars based on leaf size and stolon growing point density. 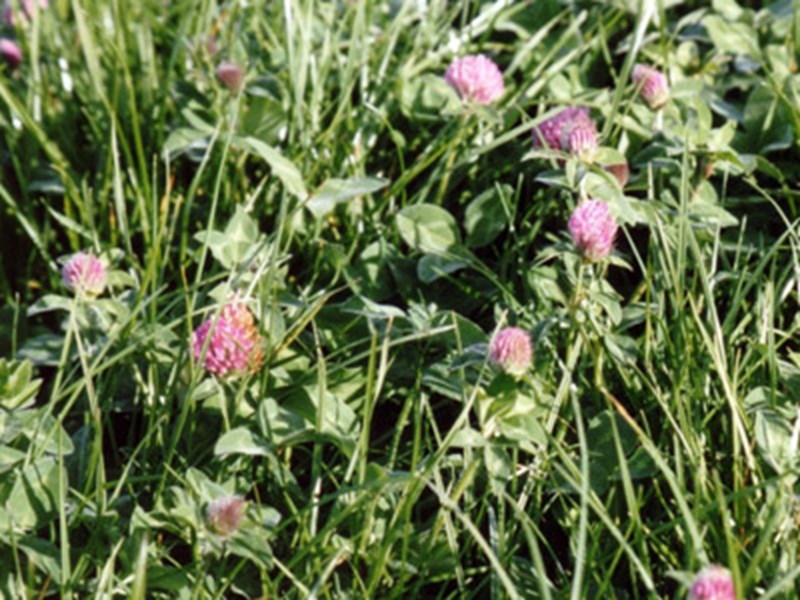 Red clover in a mixed pasture.

In intensive grazing systems red clover typically does not perform or persist well.

It can last up to 7 years under favourable conditions, particularly lax grazing or where a long summer grazing rotation is used.

Under irrigation pure swards of red clover can grow 17 t DM/ha/year, less than lucerne in this situation, but typically red clover DM yields are much lower in a mixed pasture where it must compete with other species.

Red clover should be sown in mixtures at 4 kg/ha for diploid cultivars, with tetraploid types sown at heavier rates because of their larger seeds. It needs a sufficient plant density to contribute well in a pasture, because it does not spread like white clover, nor re-seed readily.

Investing in pasture renewal will improve the production and performance of your land and livestock.
Thank you for submitting your opinion
Sorry, we could not process your request at this time. Please try again later.