There are four main ways to renew pasture, cultivation, spray-drilling, undersowing and oversowing. 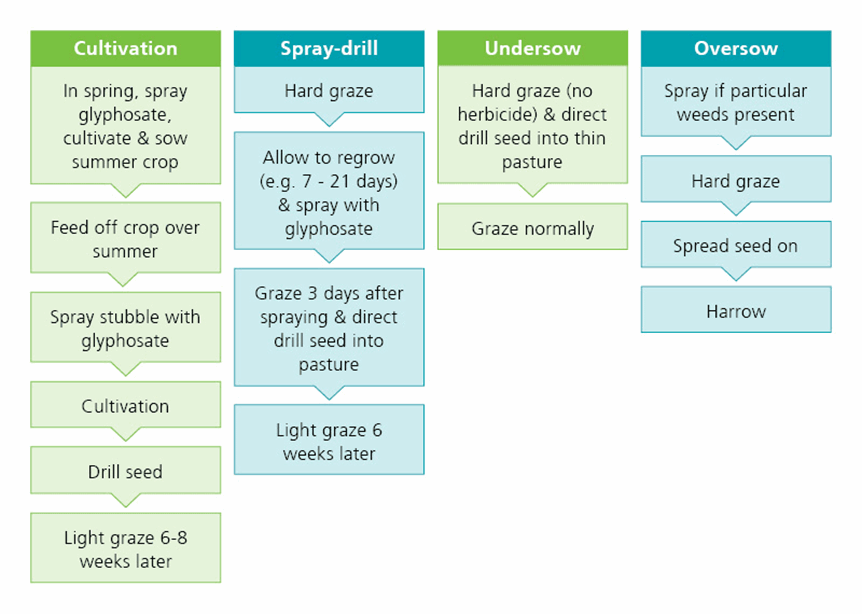 Involves breaking up the soil prior to sowing with the likes of a plough, power harrow, discs or rotocrumbler. It is necessary where there is a need to eliminate compaction or levelling, or lime incorporation is required.

A direct-drill is used to sow treated seed into an uncultivated paddock after existing pasture killed by herbicide.

Use a direct-drill to sow treated seed into existing pasture.

Works very well in the narrow window of time when a pasture has thinned out but has not yet been overtaken by weed ingression.

Use after extended dry conditions where large areas need to be sown, or after winter pugging damage.

Results are variable where it’s used in pastures too dense for the new seedlings to establish well.

Treated seed is broadcasted on to the surface of the soil.

Not recommended for improvement of lowland pastures due to high seeding mortality.

Sowing rates are generally higher, as establishment rates of seed placed on the ground surface are lower.

There are a number of key steps to consider including sowing date, seedbed quality, sowing depth and seed ground coverage.

Find out when new pasture is ready to be grazed, when to apply nutrients and how to control weeds.
Thank you for submitting your opinion
Sorry, we could not process your request at this time. Please try again later.