Clear heads and a healthy herd

Clear heads and a healthy herd

For Northland farmers Mark and Vicki Meyer, keeping their cows thriving starts with keeping their farm team thriving, even in the busy winter months.

Life hasn’t always been stress-free for the Meyers, who farm at Tangiteroria between Whangarei and Dargaville. They bought their first farm, a 200-cow operation, in 2006 after working their way up from sharemilking. The couple were as “pleased as punch” to become farm owners but were feeling frazzled after only a year. 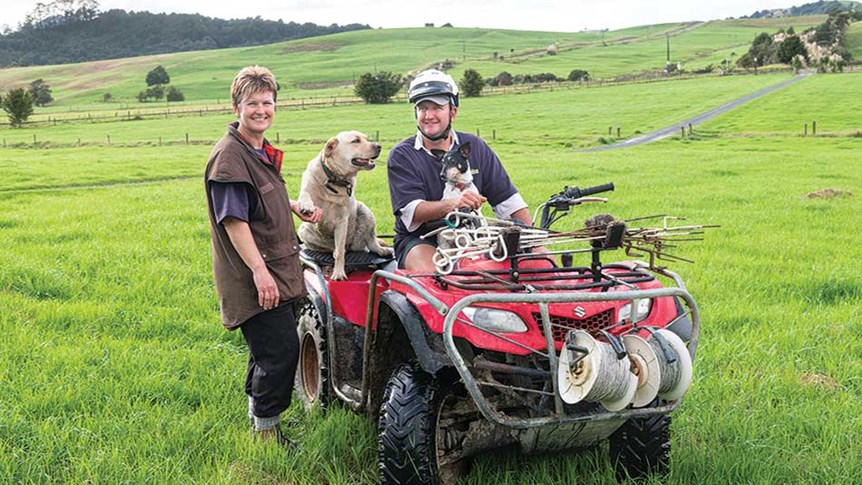 Keeping people and animals in good nick is a top priority for Vicki and Mark, seen here with their faithful hounds, Abbey and Digger.

“In the first year of farm ownership, we milked 200 cows twice a day,” says Mark. “It was constant: milking, calving, mating, getting the crops in the ground, then feeding them out. As a one-man band you never have any spare time, and family life suffered. I said to our bank manager, ‘If this is farm ownership, you can have it back’. He suggested we move entirely to once-a-day (OAD) milking.” 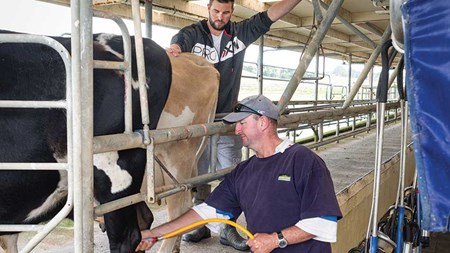 Taking on farm manager Logan Williams (top) five years ago has reduced stress levels for Mark and Vicki – and their cows.

When Mark and Vicki bought a bigger 330-cow farm up the road, they increased the herd to 400. For the first three years, they milked 250 cows once a day (OAD) all season and 150 cows twice a day until Christmas. 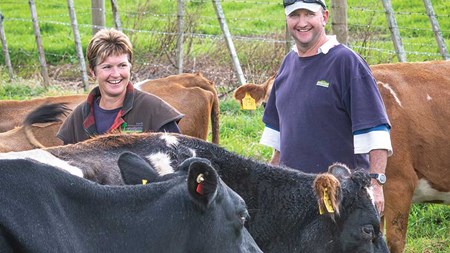 Vicki and Mark see their cows as the farm's 'beating heart'.

“Since Logan Williams, our farm manager, joined us five years ago, we’ve been OAD all season. This has reduced stress levels for us and the cows, and we get more family time. Since then, we haven’t looked back,” says Mark. 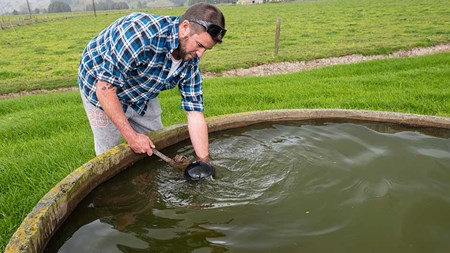 Getting the farm jobs done before calving allows everyone to have time off. 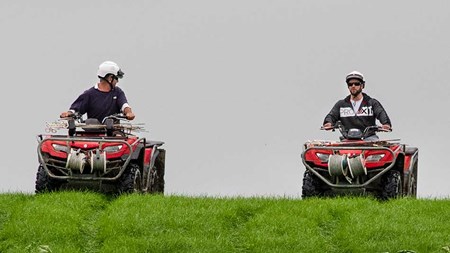 Mark and Logan are heading in the same direction when it comes to keeping people and cows healthy.

Keeping people and animals in top condition is a priority for the Meyers. This involves two lots of planning: one for the team to ensure everyone gets regular time off, even at the busiest time of year; and one for the animals, focusing on prevention rather than cure.

The values that Mark, Vicki and Logan share enable them to work well together. They work hard, look after the stock and get off-farm whenever they can, but the animals are the farm’s beating heart.

“They’re precious,” says Vicki. “When you hand-rear calves from a couple of hours old, they’re like your babies and you come to know many of them. Everyone thinks I’m mad because I name half the cows.” 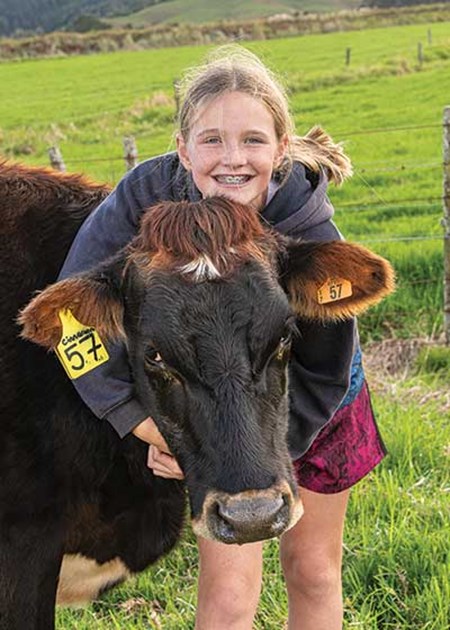 Jessica with Cinnamon, her most recent calf club companion.

Mark and Logan have a more down-to-earth approach.

Mark says one of the best pieces of advice he’s received is that cows let you know when there’s something wrong.

“That’s what I’m forever telling Logan and our kids: if you keep an eye out when you’re shifting stock, you pick things up straight away.” 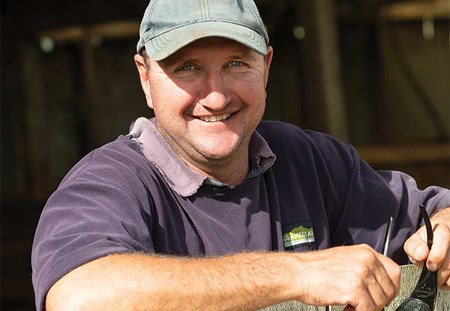 Logan manages the on-farm mating performance, which drives the farm business. Mark puts their high six-week in-calf rate down to a strong animal care programme, paying attention to young stock and making sure each animal goes into mating in the best condition possible.

Every year, Mark and his vet Brian Lowe, of Dargaville Veterinary Centre, work with Logan on an animal health plan. Mark says 75 to 80 percent of their vet spend focuses on prevention rather than cure.

“For example, we use dry cow therapy strategically to minimise somatic cell count (SCC) and, this year, the heifers will be teat-sealed for the first time to protect them from environmental mastitis. The calves and two-year-olds are weighed and drenched every four to five weeks and boluses are used to correct trace element and vitamin deficiencies. Pre-mating, the yearlings have a copper injection and, in the week before mating, they have a vitamin B12 shot to maximise reproductive performance,” says Mark.

“Our herd health has definitely improved. Although it’s difficult to put a figure on the savings, it’s allowed us to finetune our mating performance, which gives us options as to which cows to cull and sell, so we can fast-track the genetic merit of our herd.”

Over the last three seasons, the herd’s bulk SCC has dropped from 270,000 to 170,000 cells/millilitre across the whole season.

Teamwork, talking and time off 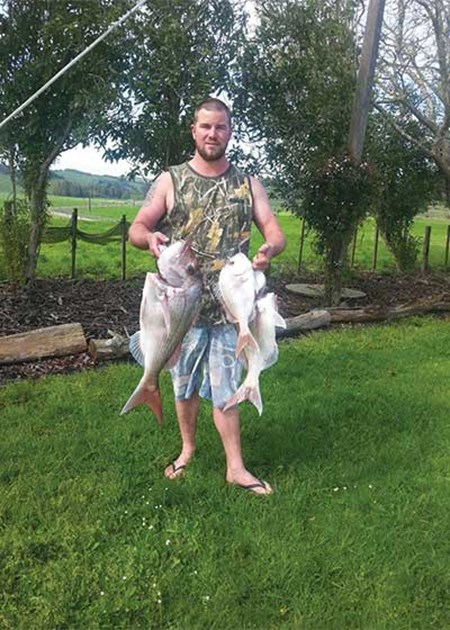 Logan displays his haul from a kontiki session at Baylys Beach last summer.

On the Meyers’ farm, everyone is hands-on. Vicki handles the administrative tasks and oversees the calf rearing, but even this is a team effort.

“Once Mark and Logan have finished in the shed, they pop over to see if I need help,” says Vicki.

Before calving starts at the beginning of July, the calf sheds are prepared and the farm chores are up to date. Mark and Logan talk all the time and, in the earlier part of each week, they try to do more than is strictly necessary to allow time off during the busy period.

“We might get the urea on and get those types of jobs done and, on Thursday and Friday, we set up for the weekend. When it comes to Saturday and Sunday, we do the bare minimum. We milk the cows, feed the calves, get the cows and calves in, and shift the stock so we’re done by 3pm to 4pm. We structure our week around that approach. Obviously, there’s the occasional hiccup, but generally we’re home by 4.30pm during calving," says Mark.

Working together as a team includes pitching in to cut each other’s firewood and the Meyer children even helped Logan paint his house during the last school holidays.

“If Vicki steps in while I’m away, she discusses any problems with Logan,” says Mark. “They both work really well together and aren't afraid to discuss things and make a call rather than contacting me. We’re fortunate to have Logan as a farm manager. He’s awesome and treats the farm as his own. We discuss all aspects of running the farm together and if we need further advice, we ask for it.” 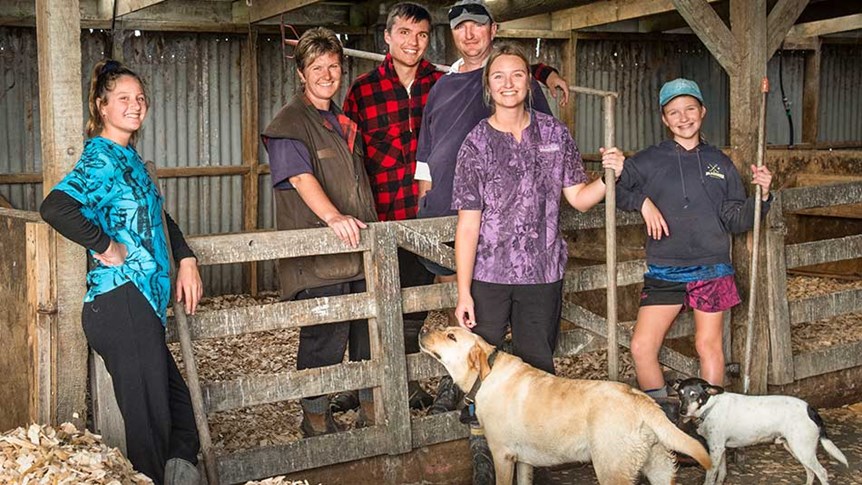 The family pitches in to get the calf sheds ready.

Logan says it’s important for him to spend time with his partner Samantha and their two young children, Kasey (3), and Kody (2). 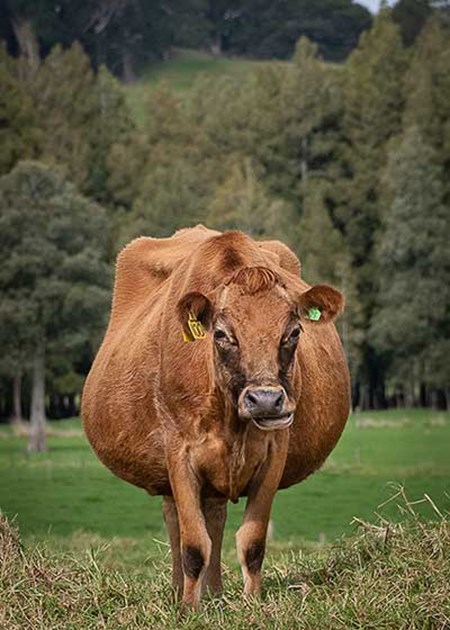 “It’s great to get home while it’s still daylight to hang out with the kids, otherwise you’re leaving while it’s dark in the morning and coming home after dark in the evening. We all manage to fit in some family time, even during the busy season, and I sometimes manage to go fishing at nearby Baylys Beach,” says Logan.

The Meyers get off-farm by going to watch their children play sport, which provides a good chance to catch up with other farmers. The family also likes heading along to a local bistro, run by their community during calving.

“Different organisations cook a dinner every couple of months as a fundraiser,” says Mark. “We go along for a couple of hours and chat to the neighbours. Two hours away can seem like a day and you go home rehydrated and refreshed.”

Taking all these opportunities for a break results in a team that’s better able to care for the herd, says Mark.

“You’ve got a clearer mind when you go back to work, and you work more efficiently. And at the end of the day, if we’re all feeling on the top of our game, we can take better care of the herd and spot any animal health issues more quickly.”

This article was originally published in Inside Dairy July 2019

Advice for seasonal management of feed and pasture including managing pasture prior to mating, pugging damage and surplus. 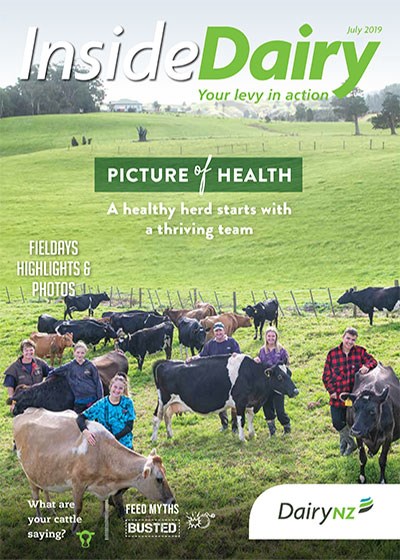