Southland’s Jolene Germann knows full well how daunting it can be to make a submission to a regional council plan. But her farmer-led catchment group, working with DairyNZ, has proven it’s possible to deliver responsible, workable solutions to improving regional water quality — without pushing themselves out of business. 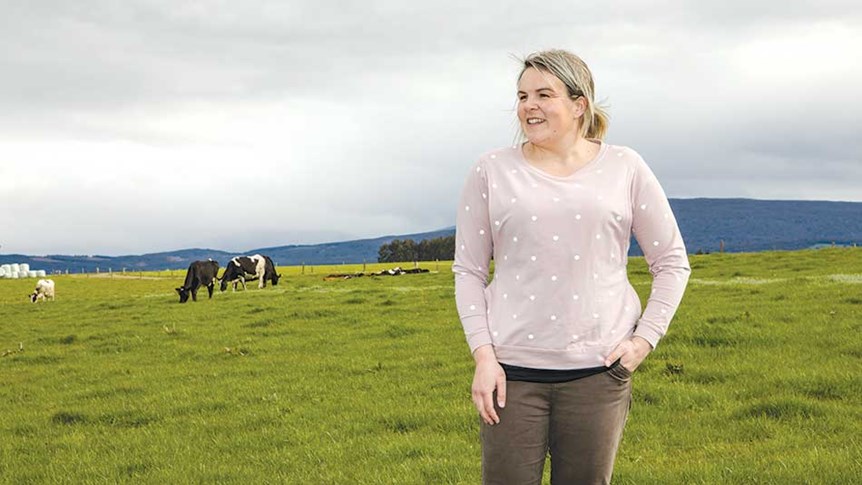 Southland dairy farmer and farm consultant Jolene Germann knows many farmers can feel intimidated by formal plans and submission processes. That's why she's helping them have their say and discover what alternatives to put forward.

Farmers in almost every region face the prospect of changes in their farming practices as a result of regional plan requirements around water quality and nutrient loss.

While most farmers accept the intention of plans to help lift the country’s water quality, many can feel intimidated and even powerless when it comes to having a say on how these plans will affect them, and what some alternatives are to plan proposals. 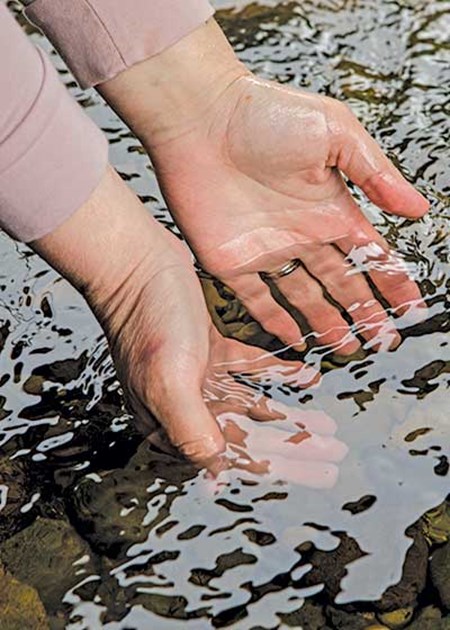 Jolene checks the clarity of the Waicolo Stream, which runs right through the Germanns' farm, before joining the Otautau Stream which flows into the Aparima River. She believes that farmers having a hand in the WaLP process can achieve farmers' business goals, as well as everyone's water quality aims.

Southland dairy farmer, dairy environment leader and farm consultant Jolene Germann has played an instrumental role in helping farmers in the Aparima Catchment get a handle on what the Southland Water and Land Plan (WaLP) means for them. She has helped to ensure they can get their voice heard when it comes to submitting on the plan’s proposals.

In the region, farmer catchment groups have multiplied to total of 19, providing the vehicle for a community-led approach to addressing some of the freshwater issues.

Jolene appreciates more than most the value of literally treading carefully when dairying in a sensitive environment like Southland. She and husband Hadleigh (Federated Farmers' Southland dairy chair) are equity partners in an Otautau property that’s on heavy soils with high clay content, and which pugs easily in wet weather. Stocking rates, a planned approach to wintering and care in wet weather keep their soils well managed. Jolene is aware that the WaLP will mean farmers need to think about managing soils more carefully during wintering, if they’re not doing this already.

She also wants to see that the next stage of limit-setting under the WaLP recognises farmers’ need to farm profitably and sensibly, alongside achieving the plan’s overarching water quality aims.

Urging farmers to take the lead 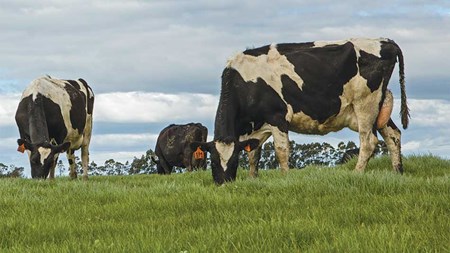 The Germanns' 550 cows are a mixture of mostly Kiwi-cross and Jersey, with some Friesians.

In 2016, Jolene completed her Kellogg Rural Leadership project on how DairyNZ could support Southland dairy farmers to adapt to the regulations.

“What I found was that dairy farmers had a responsibility to build their relationships with council and community, and while DairyNZ had an important supporting role, dairy farmers themselves had to show leadership,” she says.

Proving she could ‘walk the walk’, she decided in early 2016 to form the mid-Aparima Catchment Group, with some neighbouring farmers, after completing her Kellogg work. It is now one of six catchment groups covering the entire Aparima River catchment.

“We knew that submissions had to be in on the WaLP by July, and DairyNZ had been very encouraging to farmers about getting together as a group to better understand the plan, and to formulate what their submissions could be.”

She had appreciated input and observations from existing groups and individuals, including Balfour dairy farmer Aaron Wilson, who was founder of the Upper Waimea Catchment Group, one of the first formed in Southland.

That group’s field days and open approach to the community, both farming and non-farming, has earned respect around council chambers. It also helped break down the traditional ‘us and them’ stance between council and farming groups. 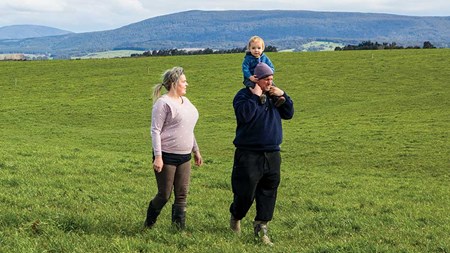 Jolene and Hadleigh with their 20-month-old son Harry, who will be joined by a new sibling in January 2020.

Jolene’s catchment group built up a contact list of almost 40 farmers, and drew strong interest in formulating a submission.

“That was also in part because we were standing on a burning platform in terms of how long we had to get submissions together.”

Having the group meant brainstorming sessions could be held to identify areas to submit upon. Working with DairyNZ staff provided expertise and the leverage to publicise the group’s work, helping gain a positive profile within the greater community.

That also included input from other DairyNZ colleagues with expertise to help inform farmers not only on the submissions process, but also the science and farm system impacts underpinning the WaLP. 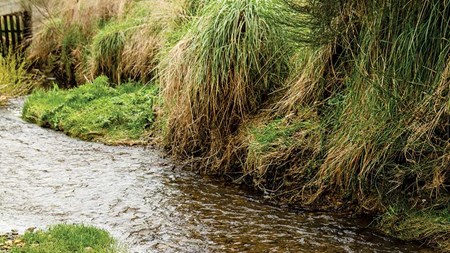 “The Southland soils have been categorised into physiographic zones that are based on geology, soil type, hydrology, climate and topography,” says Jolene. “The natural nutrient losses from these soil zones could have an impact upon farms’ future ability to operate in terms of stocking rates and intensity. It is quite a complex science to determine the risky soils. We were supportive of the science but were concerned there was no way to dispute the zone some soils were in.”

Jolene acknowledges submitting on a plan like Southland’s was quite daunting to farmers, and quite foreign.

“DairyNZ was very helpful. We had drop-in sessions for farmers and provided good templates for their submissions to be based on.”

Working with Beef + Lamb New Zealand staff also helped boost the group’s profile and unify all farmers in the catchment, rather than it becoming simply a ‘dairy’ issue.

“We also encouraged farmers to submit on things they liked about the plan, so it did not appear they were entirely negative about it, and there genuinely are aspects that are positive.”

One aspect the group submitted on was winter grazing rules that limited farms to no more than 50 hectares of wintering area.

“It didn’t take account of that as a proportion of land holding area; it was quite an arbitrary figure.” 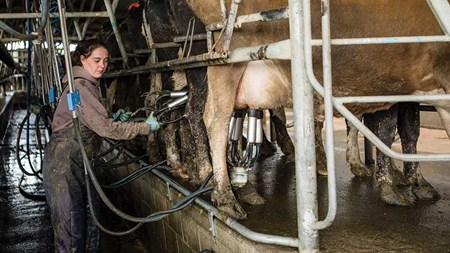 Role-playing and practising were also done to help farmers sharpen up the verbal presentations they could give to their written submissions.

“The hearings process is quite formal, and council feedback was they were impressed with the quality of the submissions made from farmers. They only had about 10 minutes to talk, with a few minutes for questions, so they really wanted to make the most of the opportunity.”

Meantime, individual farmers also submitted alongside the group, adding to the constructive volume of farmer input at hearings time.

The catchment group still operates, but its members are taking a ‘wait and see’ approach as the WaLP is under appeal in the Environment Court.

The six Aparima Catchment Group leaders are also participating in a community involvement project (Aparima Community and Environment, or ACE), helping effect change across the entire catchment of 636 landowners.

Jolene is satisfied with the process of the hearings on the WaLP, which she thinks are in part thanks to farmers’ collaborative approach with Environment Southland, and the thought put into submissions. She is hopeful that there will be no major surprises coming out of the court’s decision on the WaLP appeal. 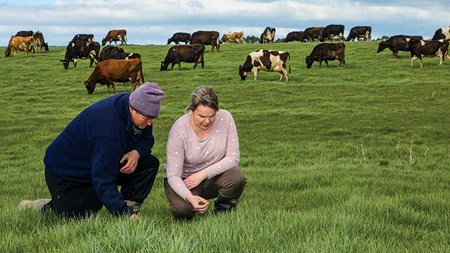 Jolene and Hadleigh are former New Zealand Dairy Industry Awards finalists, while Jolene also has a doctorate in biochemistry of the clover root weevil and was a Fonterra Dairy Woman of the Year finalist in 2017.

While it awaits that court decision, the catchment group has been busy making a submission to the Government’s Essential Freshwater Package.

“Our previous submission to the WaLP has made us more confident about submitting on the Essential Freshwater Package,” says Jolene. “We’ve followed a similar process, with brainstorming as a catchment group and focusing on the key areas we wish to submit on. We’ve offered alternatives for things we don’t agree with and submitted on things that we do agree with.”

Jolene says the catchment group has combined with its local discussion group for a field day, where DairyNZ water quality specialist Justin Kitto spoke. DairyNZ’s Tessa Schmidt, a graduate environmental change specialist, has been a big help on the package too, she adds.

“There were also DairyNZ Essential Freshwater meetings and webinars that our members attended – these helped us prepare for our submission. So, again, DairyNZ has provided a lot of support.”