She’s leaning over the fence surrounding a stand of native bush, and completely tuned in to the soundtrack of her favourite music. Here’s what makes her smile:

With husband Roger, Jane Hutchings is one of dozens of dairy farmers helping achieve the Kiwi Coast dream of thriving kiwi, roaming freely throughout Northland, nurtured and cared for by local people.

Kiwi Coast got underway five years ago, building on work done by the Landcare Trust when Helen Moodie, who is now DairyNZ’s Northland sustainability specialist, provided guidance to people keen to look after the kiwi that were increasingly appearing in their backyards.

“Kiwi Coast recognises that looking after kiwi is not about locking them up and throwing away the key,” Ms Moodie says. “We have kiwi in our productive landscapes here in Northland where they’re eating the worms and other insects that are prolific in our pastures – and through Kiwi Coast we are growing the kiwi populations by managing their threats.” 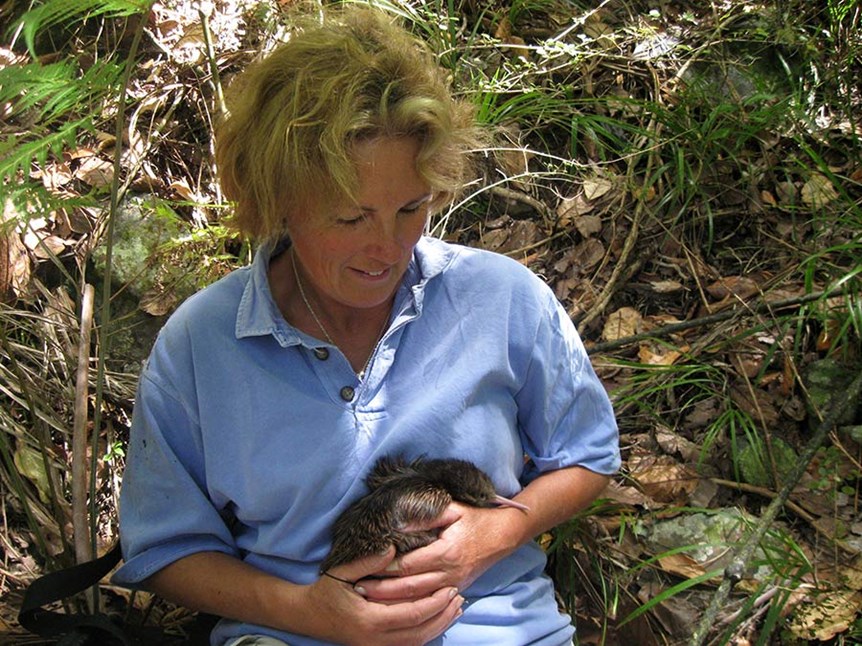 Dairy farmer Jane Hutchings with a kiwi in the Puketotara Landcare area near Kerikeri – 'we're blessed that so many people in Northland have the same passion to protect kiwi'.

Community led groups including dairy farmers, other farmers, lifestyle block owners, other land owners, landcare groups, schools, iwi and hapu make up 105 of the initiatives, with the remainder Northland agencies and businesses, including forestry companies.

“The 120 entities linked into Kiwi Coast currently look after nearly 150,000 hectares of land stretching from the Aupouri Peninsula in the north to Mangawhai Heads in the southern region of Northland. Everyone is driven by the shared vision of creating a corridor of comparative safety for kiwi.”

Key predators for kiwi are stoats which kill 95 percent of kiwi chicks before they reach their first birthday.

And then there are the dogs.

She says while dogs might be man’s best friend, they are the biggest threat to adult kiwi and this is why Kiwi Coast and its affiliated groups take every opportunity to help dog owners control their animals.

She says farmers, as landowners, are vital in Northland’s kiwi protection work.

“Kiwi Coast has many farmer champions, – and when others in the community see our farmers are involved, they want to help too. They say ‘we can do this; we can look after our patch’. Their imagination is captured.”

She adds that kiwi can do really well on farms.

“Many farmers, have fenced off bush, wetlands and stream margins to exclude stock, which helps protect kiwi habitat.

“And farms can also be safe places for kiwi with farmers having good dog control in place to protect their stock.”

Mrs Hutchings, whose family dairy farm is near Kerikeri, says having kiwi – ‘our national icon’ – living and breeding on their farm is inspiring.

“We’re blessed that so many people in Northland have the same passion to protect kiwi.

“We always knew there were kiwi on our dairy farm, although rarely sighted. The severe drought in 2009 brought kiwi out of the bush foraging for food and water. After seeing six kiwi out in the paddock one night we contacted the Kiwi Foundation to get advice on how to help them, not only through the drought, but also long term.”

The Hutchings quickly learnt the major threats to kiwi were pests and uncontrolled dogs.

With support from Northland Regional Council (NRC), they pulled together a pest control group of farming neighbours and others in their immediate area, and so the Puketotara Landcare group was formed. The group now protects kiwi in an area covering more than 5,000 hectares, stretching from Kerikeri to Puketi Forest.

Mrs Hutchings says NRC was a huge help in setting up the Puketotara group, as it has been with other similar groups around Northland.

“The council provided us with start-up funding, and bait stations, traps, toxins and practical advice on how to eradicate the many pests that threaten kiwi, either directly or competing with them for food. Since 2012 we’ve catalogued what we’ve exterminated – possums, rats, mice and hedgehogs by the thousands, as well as feral cats, ferrets, stoats, weasels, rabbits, hares, magpies, and mynas.”

She adds the group also receives funding from Kiwis for Kiwis, as well as Fonterra’s Grass Roots initiative.

“As well as helping protect kiwi, our work is seeing the surrounding bush flourish. Other native bird life has increased too, with weka returning, and tomtits, tui and kereru regularly seen.”

Puketotara Landcare’s proximity to Kerikeri has inspired a Christmas party each year that helps garner support from lifestyle block owners and urban residents.

“We all know how lucky we all are to have kiwi in our backyards, and many people go away from the party in charge of a few traps.

“Once the dog owners understand the threat to kiwis, they’re happy to keep their animals under control too.”

Another dairy farming family working to protect kiwi on their own land and inspire others is the Imeson family at Hukerenui.

Judy Imeson is administrator of the Tanekaha Community Pest Control Area, and says her inspiration to protect kiwi came from neighbour Edwin Smith, who was a dairy farmer at the time – and a hardy adult male kiwi they named Two Toes.

With the Department of Conservation (DOC), Mr Smith had been monitoring the male kiwi, which had wandered out of the adjoining Whangarei Kiwi Sanctuary, and was found caught in a possum trap.

Mrs Imeson says he was freed, but injured, and one of his three toes had to be removed – and so he was named Two Toes.

“After recuperating at Whangarei Bird Recovery Centre, Two Toes was fitted with a monitor and released.

“He and his life-long partner Binky then went on to produce many viable eggs over a 10-year period – sometimes three times a year. Most of their eggs were removed for safe hatching at Auckland Zoo, with the resulting chicks released on the predator-free islands of Motuora or Matakohe/Limestone Island in Whangarei Harbour.”

DairyNZ's sustainability specialist, Helen Moodie, and Backyard Kiwi coordinator, Todd Hamilton. with Georgie, one of the 900-plus kiwi roaming freely in the Whangarei pest controlled area.

In 2016, with the arrival of 12 juvenile kiwis in the pest controlled area of Tanekaha it was decided to remove Two Toes’ transmitter, and allow him and Binky to live out their natural lives.

“He emails a regular newsletter with trapping results and monitoring so everyone is kept up to date, and inspired to carry on the good work.”

Along with pest control, the Kiwi Coast groups monitor their kiwi to gauge the success of their projects. Some groups have permits to fit transmitters to a handful of breeding males to monitor movement and nesting activity. Almost all groups participate in the annual Northland Kiwi Call Count Survey organised by DOC, listening out at night for the male and female calls in early winter.

They know their kiwi are doing well and growing in numbers when they hear an increased number of calls each year.

Kiwis call during the hours of darkness to mark their territory and stay in touch with their mate. One of the simplest ways to locate kiwi is to listen for their distinctive, piercing calls, which can travel more than a kilometre.

Kiwi Coast and many of the groups involved have websites and Facebook pages where a range of information is posted. This includes handy hints on pest control and details of when and where kiwi are to be released to begin new lives in pest controlled areas, as well as videos of kiwi filmed with trail cameras, and photos of birdlife and bush.

“By far the best way to enthuse people and get them involved is the kiwi release events,” says Mrs Imeson.

“These releases are happy, positive occasions where locals can see a real live kiwi up close before they are released into their new homes – burrows in protected bushland, learn about what they can do to help protect them, and celebrate the successful work being done.”

Another group linked into Kiwi Coast is Backyard Kiwi which has been working to protect kiwi at Whangarei Heads for 20 years.

Backyard Kiwi covers the peninsula’s 6,000 hectares of mixed dairy, beef, and lifestyle block land. In the past 12 years alone, the group has turned the area into a kiwi stronghold, taking the kiwi population from 80 documented birds to more than 900.