The shape of New Zealand’s dairy sector continues to evolve with the latest data showing a shift to fewer dairy herds and a greater focus on their performance.

According to the New Zealand Dairy Statistics 2017-18 report, published by DairyNZ and Livestock Improvement Corporation (LIC), there were 11,590 dairy herds last season – 158 fewer than the previous season.

This was the third year of decreasing herd numbers, but the average herd size did increase by 17 cows to 431. The total 2017-18 cow population was 4.99 million, an increase of 2.7% from the previous season but still below the peak population of more than 5.01 million cows in the 2014-15 season.

“Dairy companies processed 20.7 billion litres of milk last season, containing 1.84 billion kilograms of milksolids – down 0.6% on the previous season,” said Mr Newman. “Farmers benefited from favourable late summer and autumn conditions so a number of the regions were able to milk their herd longer into the new year, which supported reasonable production for the year.”

Sharemilking arrangements were down by 44 herds from the previous season.

The report also showed a surge in the uptake of herd improvement services, as farmers seek higher performing and more efficient dairy cows through the use of herd testing and artificial breeding (AB).

“The days of significant cow growth may be over and we know that farmers are more focused on productivity and efficiency. Without doubt farmers are wanting to know more about the production status of the cows they milk, gain more confidence about their parentage and certainly invest appropriately to breed superior livestock into the future.”

While the number of cows mated to AB had a nominal increase of 1.01%, the number of yearlings mated to AB jumped up 17% on the previous season which Ellis says reflects farmers identifying every opportunity to maximise the rate of genetic gain.

Genetic gain is worth upwards of $200 million to the New Zealand dairy sector each year. 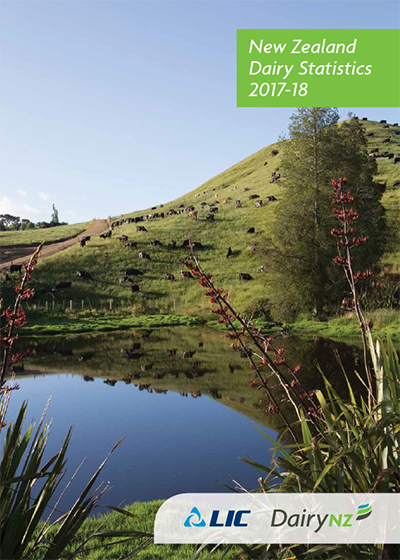 New Zealand Dairy Statistics 2017-18 is a report that shows historical information up to and including the 2017-18 season.

Non levy paying price: $ 45.00
Thank you for submitting your opinion
Sorry, we could not process your request at this time. Please try again later.