A recipient of two DairyNZ scholarships, Caitlyn Poole, has recently arrived in China on an exciting and prestigious new scholarship – a Prime Minister’s Scholarship for Asia. 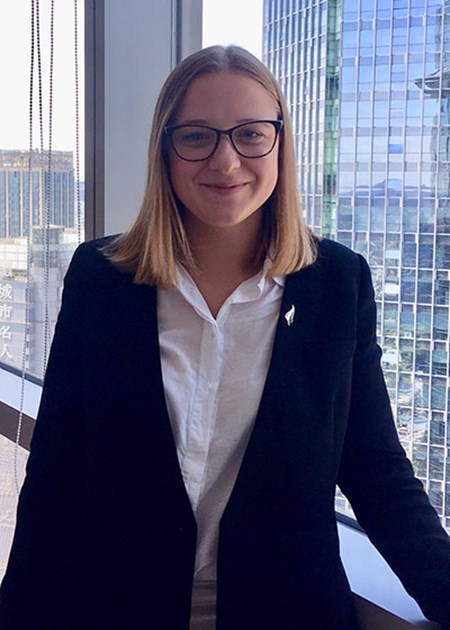 Caitlyn Poole in the Ministry of Foreign Affairs and Trade office in the New Zealand Consulate in Chengdu, China.

The Prime Minister’s scholarship gives young people the opportunity to study anywhere in Asia to strengthen their understanding of other cultures and build international skills.

Caitlyn has chosen to study Mandarin in China and is excited about the opportunity. She has a strong interest in the importance of China as an export market for New Zealand, after growing up on a dairy farm and being exposed to China focused discussions.

“I’m really honoured to have this opportunity. Success in China is built on relationships – it’s really important to be able to communicate and understand how people in China work and do business,” says Caitlyn.

A key aim of the Prime Minister’s Scholarship for Asia is to strengthen New Zealand’s ability to engage with key Asian trading partners.

Caitlyn, 24, has studied Mandarin as part of her university studies in New Zealand and is looking forward to further developing her language skills.  In China, she will first undertake an intensive six-week language course and will then study Mandarin at Chengdu University 30-40 hours a week for six months.

Chengdu is an inland city in south-west China with 14 million people. “It will be really great to immerse myself in the culture and to mingle with Chinese students,” says Caitlyn. She will be flatting with a young Chinese woman close to the university.

Caitlyn grew up in rural South Taranaki then Te Awamutu in Waikato. She went to school at Sacred Heart Girls’ College in Hamilton before studying at Massey University on two DairyNZ scholarships. Her first scholarship was for an undergraduate degree in agricultural science and her second for a Master’s degree in animal science. Her Master’s thesis was on the association between supplementary feeding and the post-grazing residual.

Caitlyn spent a year of her undergraduate degree studying agricultural science in Brazil on an exchange programme. She learned Portuguese and worked on New Zealand-owned dairy farms for several weeks in her holidays. “Working on Kiwi farms in Brazil gave me tremendous insight into dairy farming operations overseas. It was really interesting to see how New Zealand farming practices can be successfully applied in other parts of the world, adapted for local conditions.”

This is Caitlyn’s second time in China. She worked for three months earlier this year as an intern for the Ministry of Foreign Affairs and Trade, in the New Zealand Consulate – also in Chengdu. That experience was made possible by an Asia New Zealand Foundation Business Internship Scholarship.

Her role included organising NZ cultural events, doing research for reports and attending seminars where businesses and other foreign consulates shared insights into overcoming challenges that entrepreneurs and start-ups experience in China. Caitlyn also attended meetings with New Zealand Trade and Enterprise and learned about their work behind the scenes to help Kiwis become future exporters to China.

“Every day was different and interesting in the consulate. It was great to be surrounded by highly motivated people, and surprising to see where Kiwis are in China and what they are achieving, often where you’d least expect.”

Chengdu is known as a second tier city in China by virtue of being smaller than more developed cities like Shanghai and Beijing which are known as first tier cities. Caitlyn says a lot of international trade and business focuses on first tier cities but the second tier cities and their surrounding areas also offer tremendous opportunities. They are still very large by New Zealand standards with potentially huge demand for the right products and the market is not saturated.

For her future, Caitlyn would like to be fluent in Mandarin and work in the dairy sector for the benefit of dairy farmers but is keeping her options open for now. She encourages other young people to look for opportunities wherever they go and to look beyond New Zealand. “There are plenty of opportunities out there to help you develop your career if you look.”

Information on scholarships is available from school career counsellors, training institutes, universities, polytechnics and wānanga, government departments and by researching on the Internet.

DairyNZ scholarships offer a tremendous way to kick start a career. They are for outstanding students with a particular interest in dairying opportunities. Scholarship recipients are mentored and supported throughout their study.