Only four years ago, Marcus Graham was selling houses in Auckland. He’s now running the family farm at Ohaupo, Waikato. It’s been a steep learning curve but getting advice from family, business advisers, farming friends and some wise old hands at DairyNZ discussion groups has helped him to make informed decisions. 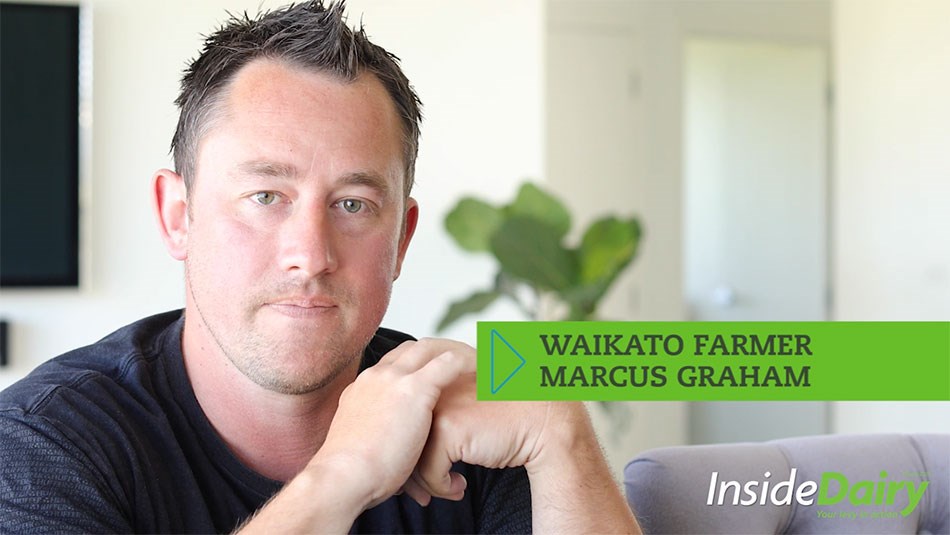 Marcus Graham has already packed a lot into his life. At 35, he has a commercial pilot’s licence, has bought, added value to and later sold houses, been a real estate salesperson, worked for Fonterra and DairyNZ, and is a director of tech company Knode. Now, with his wife Kylee and their young children Carter and Lucas, he’s running the family farm. 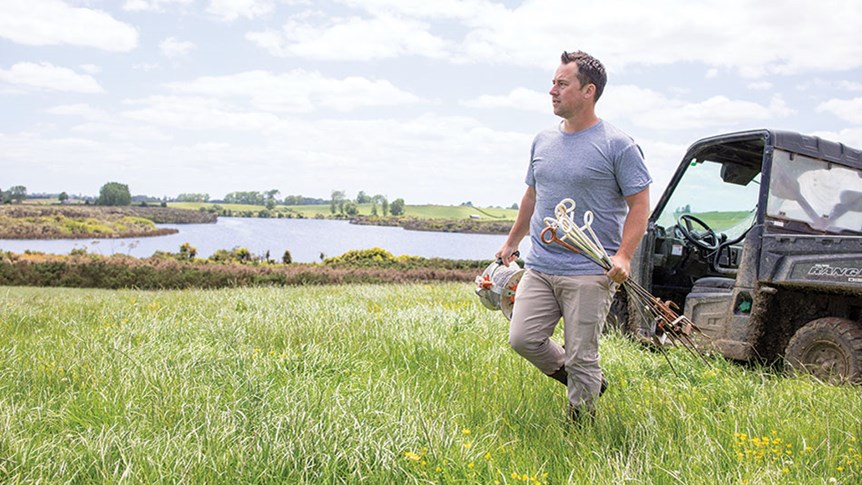 “I finished school and trained to be a pilot. I had to earn money to do that, so I worked for Fonterra on a four-on, four-off roster. The plan was that I would fly on my days off, but it became frustrating when the weather didn’t cooperate, so I decided to go to flying school full time and I qualified in 2008,” says Marcus.

With a pilot’s licence under his belt, but short of cash, Marcus teamed up with some mates to buy run-down properties in South Auckland, doing them up and selling them on. He built up a good rapport with the estate agent engaged to sell the properties and was invited to join the firm. 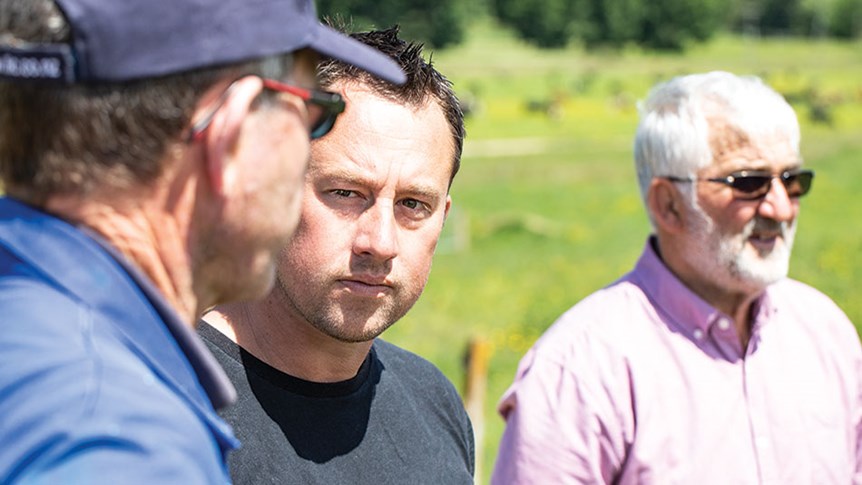 Marcus (centre) is grateful to local farmers Jim Grayling (left) and Malcolm Macpherson for sharing their knowledge with him.

Getting up to speed 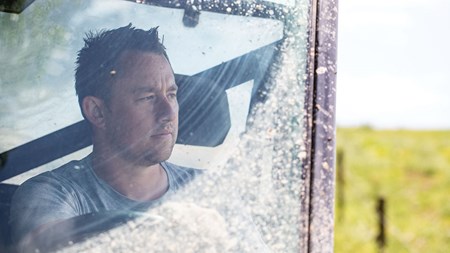 Discussion groups have played a big part in Marcus's learning and his focus on the farm's future.

Marcus’s family farm was started by his grandparents in 1955. It was a sheep and beef operation until it was converted to dairy in the 1980s. Marcus’s parents, Judith and Peter Graham, were 50:50 sharemilkers on the farm until they had a chance to buy it in 2003.

Now it was Marcus’s time to take over, but he first needed to brush up on his skills.

“Once Kylee and I made the decision to go farming, I realised that although I’d grown up on the farm and had a good feel for how things worked, my skillset wasn’t where it needed to be in terms of the day-to-day running of the property. I needed some hands-on experience.” 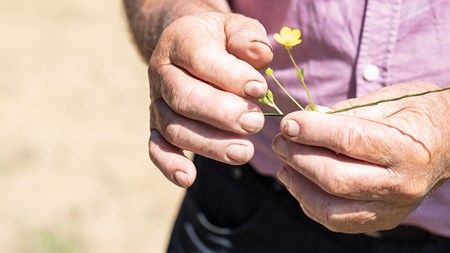 Two 'wise old hands', Malcolm and Jim, have helped Marcus consider the pros and cons of various approaches to dealing with buttercup.

A job came up as a farm assistant at DairyNZ’s Lye Farm, near Hamilton, where best practice farming is combined with the resources to carry out pasture and animal research trials.

“It worked out perfectly for me,” says Marcus. “It was handy to home and, as well as the normal farm jobs, I was involved with fodder beet trials and calf and methane trials. It was very interesting. I was there for seven months. I’d liked to have stayed longer but, when a staff member left on the home farm, I was needed to fill the gap.

“I really enjoyed the job. It was a great opportunity, good money and an exciting career for a young fellow,” says Marcus. “For eight years I worked hard at real estate and went flying for fun.”

When Marcus and Kylee married in 2012 and decided to start a family, they thought it would be a good time to shift back to the country. This coincided with his parents wanting him at home on the 145-hectare (ha) farm, so four years ago Marcus and Kylee made the move.

Pointers from some old hands

Last November, Marcus hosted a well-attended DairyNZ discussion group. He wanted to find out how other farmers were using technology in their daily operations and whether it was helping. Marcus also wanted to get some tips on buttercup; it had been a bad season for it and he was keen to learn how other farmers tackled the pesky plant. 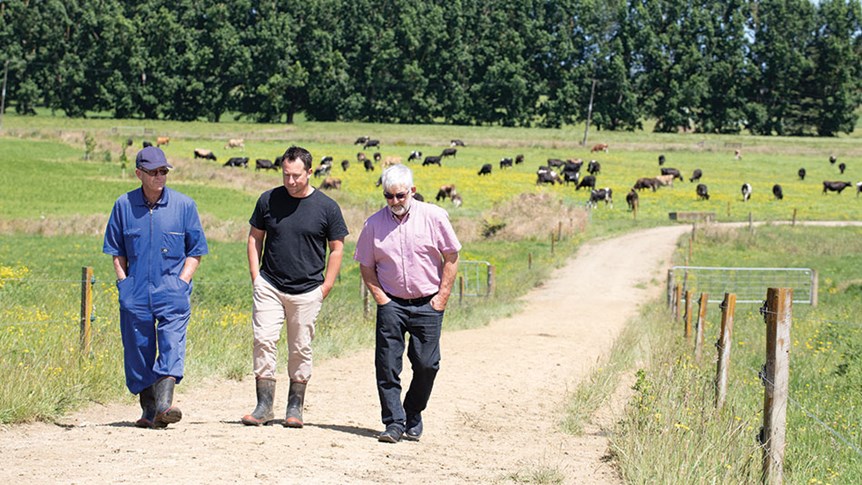 Keeping on track with water management is another key element Marcus (with Jim and Malcolm) keeps on top of.

From chatting with the other farmers, Marcus found he was ahead of the game when it came to using technology. And two local farmers, Malcolm Macpherson and Jim Grayling, gave him some excellent pointers about his buttercup quandary.

Malcolm and Jim have been involved in discussion groups since the mid-1970s, and Malcolm says the groups have changed a lot since then.

“Back then, most farm systems were similar, and the majority of farm owners worked at the coal face, so they were the ones who came to discussion groups. Farm ownership is more diversified now, with family trusts and corporate farms, and not all owners are actively involved. But I think owners should ensure their staff get access to discussion groups because we’re funding them through the levy and they can learn something from them.” 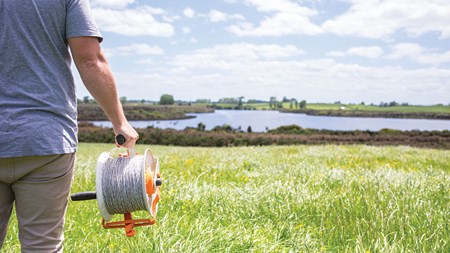 Marcus and his family have been carrying out native planting along the margins of Lake Maratoto, a peat lake on their farm.

Jim is of like mind. “Discussion groups are useful, because you pick up a point here and a point there, and as the host farmer you learn when people talk about your place. Even if you pick up one little thing, over time it all adds up.”

Marcus is grateful to have benefited from Malcolm and Jim’s knowledge.

“We spray about 20ha of buttercup annually and finding the best approach from two wise old hands has been helpful. It’s been good to have the benefit of their experience and to mull over the pros and cons of various approaches,” says Marcus.

Considering a system change to once-a-day milking (OAD), was another topic at Marcus’s discussion group. As an animal health measure, Marcus already puts young stock on OAD from Christmas until dry-off and he wanted to see whether it might be worthwhile for the whole herd. 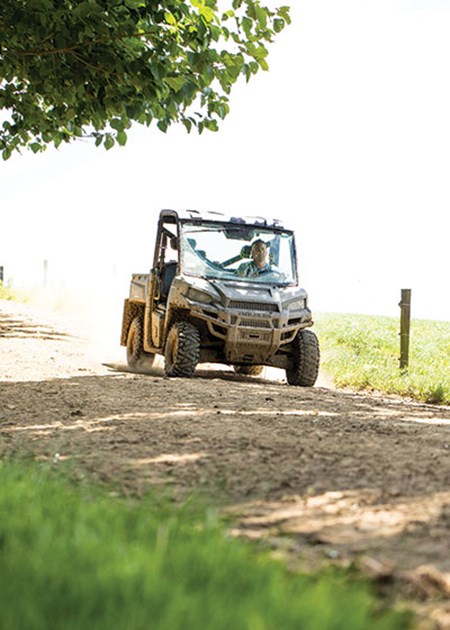 “Our DairyNZ consulting officer, Steve Canton, took us through some numbers and everyone had a view, but the consensus was that it’s not necessarily about numbers – it’s about benefits which sometimes aren’t that tangible. We’re considering OAD, and it was good to hear everyone’s opinions, so we can do our own numbers and weigh up when we might do it.”

Plugging a gap with technology

Using technology is second nature for Marcus. He is a director of Knode, a tech company he and some friends launched in 2017 to simplify the management of water supplies on-farm.

Knode is now used across a number of industries and has added to its farming offering, monitoring effluent systems and providing weather and soil monitoring technology.

“Water is a valuable resource on-farm and wasting it is not an option. Measuring water flow is one of the key things we have to keep on top of – nobody wants a leak,” says Marcus.

Marcus says he’s learned a lot from his parents and from discussion groups. He also studied livestock husbandry with Primary ITO. Logan Spaans, Marcus’s second-in command, will be studying with Primary ITO this year. Logan will get time off and be paid while doing the course but will pay for the course himself and be back on-farm in time for milking.

DairyNZ tools and services are another go-to for Marcus.

“When I first started at the farm I used the Dairy Connect mentoring service and was quite randomly teamed up with a family friend, Malcolm Piggott. It was good to be able to chat with him about everyday matters”. 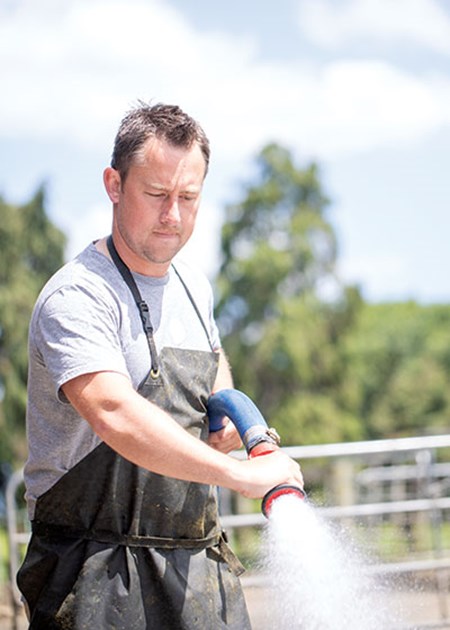 “I also regularly check DairyNZ’s Farmwatch online. The DairyNZ website is a mine of information too. Using technology is a time-saver, so it gives me more time to get more out of the day, or options to spend quality time with Kylee and the children.”

Marcus recommends DairyNZ discussion groups for farmers at any stage in their career.

“I think discussion groups are valuable. For someone like me who’s relatively new to farming, there’s all that experience out there. Even if you don’t act on the advice straight away, you can pick up one or two things to mull over,” he says.

“It’s a two-way street too; you build relationships with other farmers and you share knowledge. You gather information and are better informed which helps you to make good decisions. It’s also good to get a feel for what’s happening in the sector. When you host a discussion group and talk to others in the area, you build up a better picture.

“And for farmers with heaps of experience, discussion groups are a chance to share their hard-earned knowledge with the next generation.”

This article was originally published in Inside Dairy March 2019

Discussion groups are all about providing insights into new ways of doing things, sharing knowledge and giving farmers inspiration and confidence. To find a discussion group near you click here.