DairyNZ is encouraging farmers who’ve had success with Milksmart to share their knowledge with others. It’s all about farmers leading the change.

“All farmers want to know is, ‘what can we do to improve milking efficiency and spend no money?’” says DairyNZ milking consultant Josh Wheeler, a recognised Milksmart expert from QCONZ. 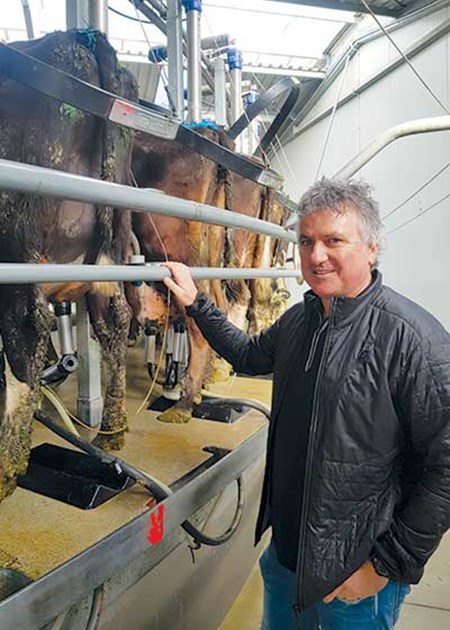 DairyNZ milking consultant Josh Wheeler is helping farmers to better understand Milksmart, so they can lead the change.

Josh has been working with DairyNZ consulting officers (COs) through discussion groups and workshops for rural professional (RPs). The aim is to improve farmers’ and RPs’ understanding of what DairyNZ’s Milksmart programme can achieve, to encourage farmer-led change.

“Once farmers have been shown how to have success with Milksmart, they can become the experts for others,” says Josh.

He’s also noticed that including milking machine company representatives into the discussion groups is slowly leading to better, stronger farmer-dealer relationships focused on getting the best out of Milksmart.

There was huge farmer interest in Josh’s presentations on Milksmart at several meetings of the Browns Discussion Group, Invercargill (with Central/Northern Southland CO, Nicole Hammond). It was the same story when he spoke at a new Milksmart-specific group in Canterbury (with Canterbury/North Otago CO, Ashley Smith).

“At Browns Discussion Group, we usually get around 25 people turning up,” says Nicole. “But at our first Milksmart session early this year, we had to cap the numbers at 60. Two later meetings were also popular.”

“Within 24 hours of the invites going out, we were fully booked,” she says. “Numbers grew over the next couple of meetings too. The interest was immense.”

“No one wants to be standing on concrete for any longer than they need to," says Ashley. "Plus, with the larger farms in Canterbury, there were big gains to be made."

She also thinks people are starting to see the value in saving time with Milksmart and MaxT (Milksmart’s ‘milking to a maximum time’ strategy) – see the other articles in this issue of Inside Dairy.

“It’s literally just changing the way you’re doing things – without negative effects on anything else." 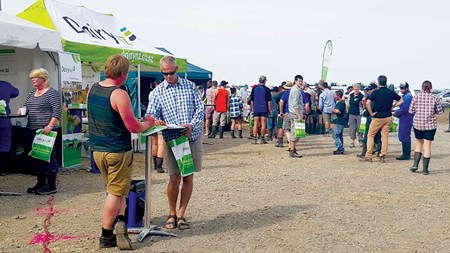 Milksmart discussion groups and events bring farmers together to share and build on knowledge.

“It’s been really hard filling roles on-farm and retaining staff due to the low unemployment rate in Southland. Doing things faster, consistently and more efficiently saves a lot of time and is more comfortable for staff and cows."

Saved hours can also be better targeted to getting other things done on the farm within the working day. It all adds up to improving staff recruitment and retention (for more on this topic see this article).

Nicole agrees with Josh Wheeler's comments that milkers' efforts around Milksmart and MaxT also lead to better cow health and wellbeing, and improve a farm’s bottom line too.

“You have a pyramid, and the people are at the top and anything within your business, whether it’s cows, grass, efficiency, all flows down from that,” says Nicole. 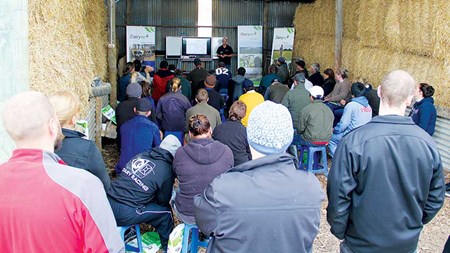 “Doing things faster, consistently and more efficiently saves a lot of time and is more comfortable for staff and cows.”

Four Milksmart Pro workshops were run in April this year to upskill rural professionals. One each was held in Ashley and Nicole’s regions (specifically, Ashburton and Invercargill).

“It’s a fantastic idea to do this,” says Ashley. “There are a lot of myths – like MaxT will increase incidence of mastitis – which need to be busted first, and the science and farmer experience does this.

“If RPs understand what Milksmart’s all about, there’ll be more ways for farmers to tap into that information. It also builds and strengthens networks between and among farmers and RPs.”

This set-up provided an opportunity to increase the pulsation ratio to milk out the cows more quickly, activating the ACRS and improving milking efficiency by 16 percent.

One milker had been starting at cup one; the other, at cup 24. That changed to a 'bunny hopping' routine where one milked the first five to six cows; the other, cows seven to 12 – saving 45 minutes per milking.

The milker was shifted to stand right by the bridge. The cupping technique was improved (to get them on within four seconds), allowing the platform to be sped up. That enabled the ACR threshold to be lifted, further speeding up the platform.

Cow throughput increased by about 150 cows per hour, initially saving about an hour of milking time (this should double at milking peak once the rest of the changes are implemented).

Check out dairynz.co.nz/milksmart and/or talk to your local CO about improving your farm’s milking efficiency. 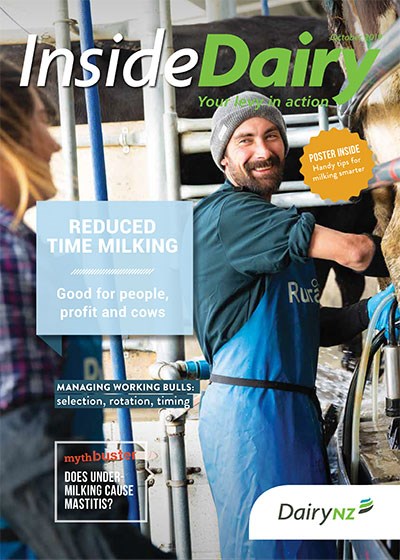