Dairy farmers are invited to find out more about research into flexible milking and its benefits at a free online DairyNZ webinar on Monday, March 30.

DairyNZ senior farm systems scientist Dr Paul Edwards is leading the flexible milking project. He says there was considerable interest from farmers in switching to ‘three in two’ milking at the recent Canterbury Farmers’ Forum where the research was presented.

The webinar on March 30 (from 7-8pm) will share early research results from the project.

“The initial data shows that it’s possible to shift to ‘three in two’ milking with only a small reduction in milk production,” says Dr Edwards. 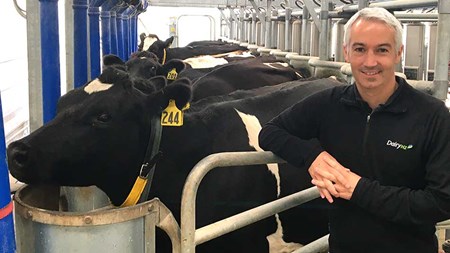 ‘Three in two’ milking is becoming increasingly popular in New Zealand. DairyNZ’s animal care consults of 500 dairy farmers nationwide identified that the number of farmers using ‘three in two’ milking has grown from 7 percent to 12 percent (between 2017/18-2018/19).

“Reducing the number of milkings and changing their timing can help better manage farm workload and allow milking to be planned around farm needs and staff availability,” says Dr Edwards.

He says that while ‘three in two’ milking may not suit all farms, reducing the number of milkings by 25 percent does create more options on farms where staffing is a challenge.

“More flexible shifts and the option to start later some days can also open up dairy roles to a wider workforce and help make work on-farm more attractive. There are lots of variations on flexible milking that are being used on New Zealand farms.”

The research programme is being jointly funded by the Ministry of Primary Industry’s Sustainable Farming Fund and DairyNZ levy investment, with in-kind support from Lincoln University, farmers and rural professionals.