Find out about the latest research, co-funded by DairyNZ's levy, on mitigating greenhouse gases (GHGs) and nitrogen (N) leaching. Do they reduce farms’ environmental footprints and improve profitability?

The challenge is to alter the farm system with a focus on sustainability while maintaining profitability. This requires planning and management to ensure the altered business’s success1. Several studies have looked at production systems that maintain or increase profitability, while reducing impacts on receiving environments, including water and air. In some, the focus was on GHG2 and in others, on N leaching3.

A sustainable system must achieve multiple objectives: lifestyle for the farmer, welfare for the animals, quality product for the dairy processor, responsibility towards the environment, contribution to the community, goodwill from the public and profitability of the business.

This article summarises three of these DairyNZ levy-funded studies to answer the question: 'If I focus on mitigating GHG or N leaching, are there co-benefits to the total environmental footprint, and what is the impact on profitability?' 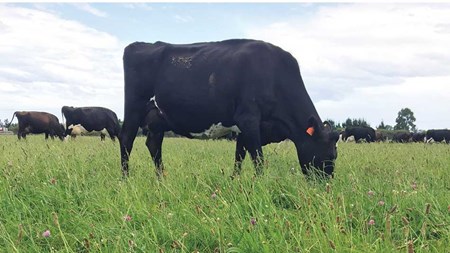 A DairyNZ modelling study4, using Farmax and Overseer, identified 27 typical dairy farms across New Zealand. The outputs of the models for these farms were regarded as the baselines.

In Figure 1 below, the baseline farms cover a range of N leaching and GHG emissions due to the range of environmental conditions across the regions (e.g. soils and rainfall), and the range of farm systems (low to high input) modelled. The relationship between the pathways of the blue circles indicates that mitigation options to reduce GHG emissions also reduce N leaching.

Figure 2 below shows for the same dataset that, in general, more GHG reductions means less profit, but there are a number of situations where mitigations had minimal negative impact on profit or increased profit (dots close to or above the horizontal line). 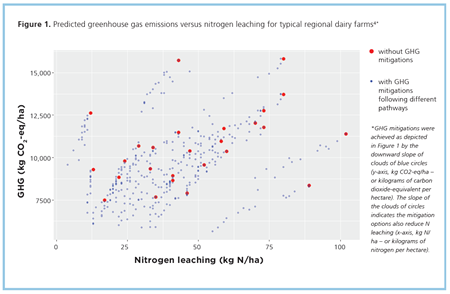 Farmlet trials co-funded by DairyNZ (Pastoral 21, or ‘P21’) were conducted in Waikato, Canterbury and South Otago over five seasons from 2011 to 2016, with the aim of developing system-level solutions to lower N leaching in a profitable manner3 (see dairynz.co.nz/P21). Data from these trials were used to determine the impacts of N leaching mitigations on total GHG emissions (‘Future’ systems; Control = ‘Current’ – see Table 1 below). Methodologies varied across the regions, but N leaching was measured using either soil suction cups, soil mineral N, or lysimeters (large barrels with undisturbed soil and sward to collect and measure drainage).

In the Waikato, the Future system had lower N inputs (fertiliser and imported supplements), a lower stocking rate with higher genetic merit cows, and used a stand-off pad in autumn and winter. The Future system reduced GHG emissions by 16 percent, i.e. 2.2t (tonnes) of CO2-eq/ ha. However, averaged over five farming seasons, milk production was reduced by four percent, i.e. 50 kilograms of milksolids per hectare (kg MS/ha) and profitability by 13 percent – $280/ha compared with the Current system. 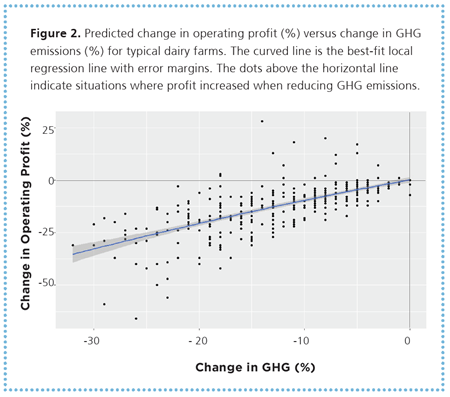 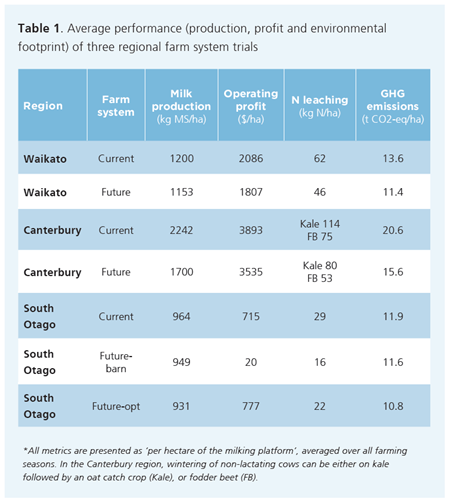 At Telford in Otago, there were two low-N leaching systems, one using a barn to house cows during winter and wet days in spring and autumn (Future-barn), and one attempting to optimise feed intake by changing calving date and type of home- grown feed (Future-opt). GHG emissions were reduced in the Future systems by between 0.3 and 1.1t CO -eq/ha (three to nine percent), compared with Current.

However, the profitability of the system that included the barn was significantly lower (NZ$700/ha or 97 percent),
mainly due to capital and maintenance costs.

In summary, N mitigations in the farmlet systems achieved leaching reductions of 22 to 30 percent. In addition, these lower-input (less imported feed and N fertiliser) systems also reduced GHG emissions by between nine and 24 percent.

The exception was the Future-barn system in South Otago, where N leaching was reduced by 45 percent but GHG emissions were not reduced due to greater manure storage and handling. GHG reductions in the lower input systems of Waikato and Canterbury came at an average loss of profit of approximately NZ$100t CO2-eq.

The programme involved five monitor dairy farms in the Canterbury region (joining in 2014), and featured experiments with forage-based mitigations over the next years5. Data from the farms were used to estimate N leaching and GHG reductions using the Overseer model. Alternative scenarios proposed by the monitor farmers (e.g. using a feed pad, changing stocking rates and/or fertiliser rates) were also modelled. Results for the five FRNL monitor farms are presented in Figure 3 below. 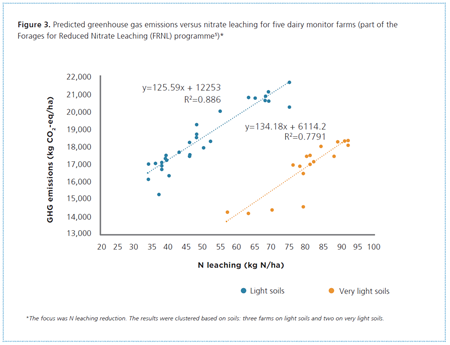 Farm system mitigations that focus on lowering GHG emissions/ha or on N leaching/ha can result in a reduced overall farm environmental footprint. Key drivers for GHG emissions and N leaching are the same: feed eaten/ha, and N surplus (from N fertiliser and imported feed). Systems with off-paddock facilities (e.g. a wintering barn) may be the exception, these can reduce N leaching, but not necessarily GHG emissions. Depending on the current status of the farm, mitigation options that reduce imported feed and N fertiliser can achieve reasonable reductions (e.g. up to 10 percent) in GHG and N leaching. This can be achieved while maintaining or improving profitability. However, larger reductions that do not reduce profit will require technological solutions such as different animal and/or plant genetics, different feeds or feed additives, or ruminal methane inhibitors. 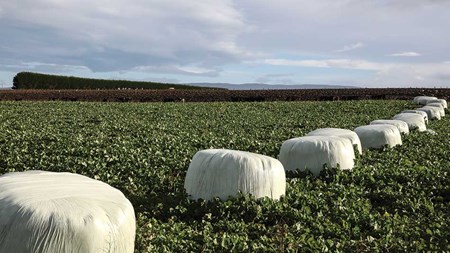 The Forages for Reduced Nitrate Leaching programme (FRNL) had principal funding from the Ministry of Business, Innovation and Employment (MBIE). The programme was a partnership between DairyNZ, AgResearch, Plant & Food Research, Lincoln University, the Foundation for Arable Research and Manaaki Whenua. Learn more at dairynz.co.nz/frnl 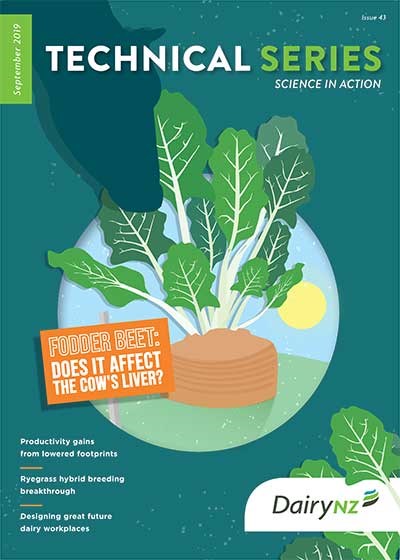