With milk fat now worth more than protein, how do Jersey and Friesian cows compare for profitability? Find out from DairyNZ senior scientist Paul Edwards.

The value of fat relative to protein has risen significantly since 2016. Fat almost reached parity in 2017/181 and, by 2018/19, was worth more than protein. That raises the question of how different breeds now compare in terms of their relative profitability.

In Technical Series June 20192, we summarised the results of an experiment comparing Jersey (J) and Friesian (F) cows at a comparative stocking rate of 80kg body weight/t DM of feed (CSR80), the optimum stocking rate for farm profitability3. This was equivalent to a stocking rate of 3 (F) and 3.6 (J) cows/ha in this experiment. 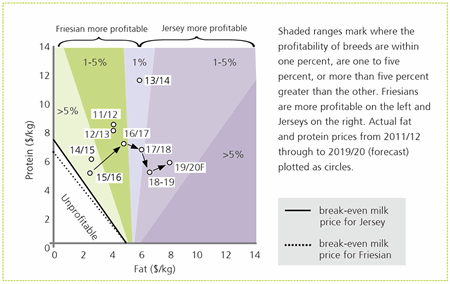 Figure 1. Effect of fat and protein value on relative profitability of Jerseys and Friesians.

J produced more fat/ha and similar protein/ha (see June article for actual numbers); however, due to the higher proportion of fat, each kg of milk was worth 9c/kg less4, based on $4.41/kg for fat and $8.02/kg for protein. Combined with differences in operating expenses/ha (due to a greater number of cows), this resulted in J being less profitable than F.

Given fat’s recent value increase, we performed a sensitivity analysis to determine the effect of fat and protein prices on the relative profitability of J and F5. Due to differences in milk composition, we also applied a seasonal volume adjustment of 2.92c/litre, resulting in an adjustment of +$39/ha for J and -$47/ha for F. See Figure 1 for results, which include milk prices since 2011/12.

J and F’s profitability was equal at a fat price of $5.67 ±0.20/kg, depending on protein price, which had little effect due to the breeds’ similar protein production (kg/ha). This fat price was the point where the value of J’s additional production of fat offset its higher operating costs/ha. Including a peak volume adjustment could decrease the fat price, when the breeds are equal in profit, by a further 23c/kg. These results indicate the price levels (particularly for fat) at which J might be favoured over F (or vice versa) in pasture-based farm systems, assuming similar levels of other income and expenses to those in this study.

In the last decade, the price of fat has generally favoured F. However, it has favoured J since 2017/18, and fat’s value relative to protein is likely to keep rising in the medium term given processors calculate milk component prices on a rolling average. However, breeding is a long-term decision, so farmers should consider the medium- to long-term outlook for fat price when choosing between these two breeds.