We asked Waikato dairy farmers Hugh Candy and Kerry Lucas-Candy to help tackle the myth that leaving some grass behind after grazing helps to promote pasture growth.

Hugh and his wife Kerry sharemilk 380 Jerseys on 102 hectares at Ngarua, east of Morrinsville. They’re not big on pasture renovation, so their ryegrass/clover pastures are more than 50 years old. Hugh says they have experimented with new grasses and, while these grasses have been fantastic for the first two years, they become progressively poor thereafter. But they undersow in autumn with a tetraploid hybrid, which lasts for a couple of years. 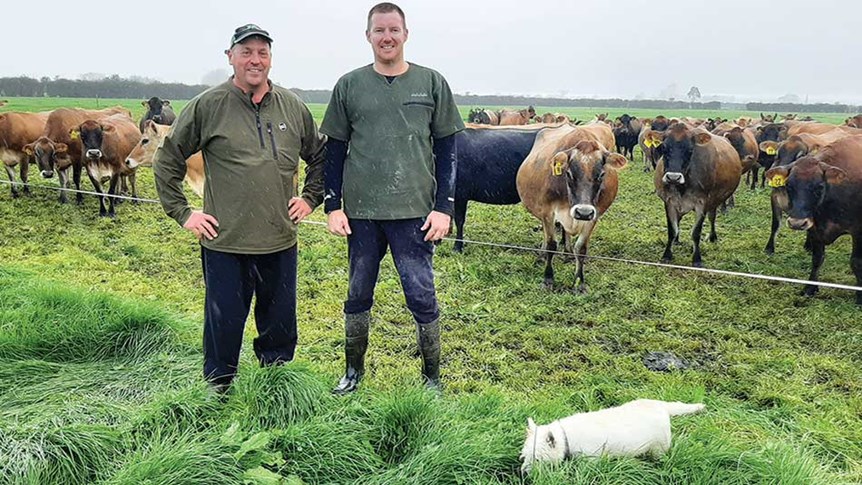 Hugh Candy (left) and herd manager Chris Day aim for a low grazing residual, even when the grass is abundant.

"We've gone away from re-grassing in favour of utilising 100 percent of the milking platform all year round. Our pasture harvest is 14 tonnes of dry matter per hectare (t DM/ha) and we feed another 2t DM/ha of imported feed (palm kernel extract and maize silage) on the shoulders," says Hugh.

“After a very dry summer last season, bordering on drought conditions, we’ve had exceptional growth in April and May – more like spring growth. In March, we had 1500 kilograms of dry matter per hectare (kg DM/ha) over the whole farm, so very short. We were getting quite concerned, because in mid-March you’re only six weeks away from the beginning of winter. But by mid-May we had 2200kg DM/ha pasture cover, so it’s been an incredible turnaround.

“So the question is: what to do with all this grass over winter? Our aim is to carry on with a 100-day round, or close to it.”

Graze it low, help it grow

Hugh and Kerry are of the view that, during winter, they need to clean the pastures out to about 1200kg DM/ha.

“If we leave any more grass behind, that grass has the potential to rot. That’s what happens when you leave too much behind: it rots and is lost before the next grazing,” says Hugh.

“In paddocks over 3000kg DM/ha, there’s already some loss through dieback because it’s growing faster than we’re grazing. But the dry cows eat a lot of that dead stuff, so we’re better off using them to graze to a residual that’s going to leave the paddock in an actively growing state.”

Use it or lose it – DairyNZ

“‘Grass grows grass’ does not mean leaving high grazing residuals to promote pasture growth. In fact, leaving too much grass behind after grazing can be wasteful and reduce subsequent growth rates,” he says.

Busted: leftover grass dies — so use it or lose it.

This article was originally published in Inside Dairy August 2019

This section will help you make pasture management decisions through calving to balance date (when feed supply meets feed demand). 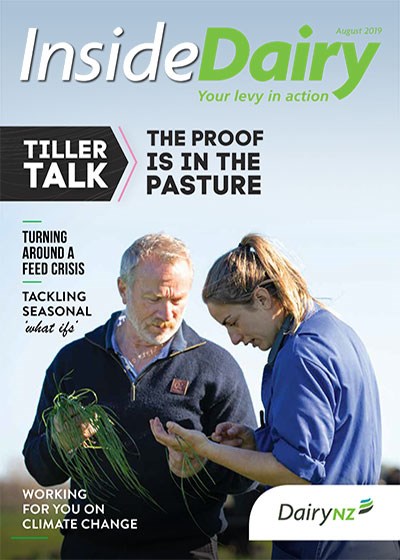