Hard graft and sacrifices on path to farm ownership

Hard graft and sacrifices on path to farm ownership

Without family help to fall back on, the path to farm ownership has been a long and challenging one for Michael and Susie Woodward – but they’ve finally got there.

At the start of the upcoming season, Canterbury sharemilkers Michael and Susie Woodward will be packing up hearth, home and 350 cross-bred cows and moving north with their four children to their newly bought farm near Otorohanga. It’s a milestone in their dairying careers.

Michael and Susie, in their late 30s, are both from farming backgrounds, albeit on different sides of the world. Michael was brought up on an Angora goat farm near Pukekohe, while Susie’s family runs an intensive 400-cow dairying operation in upstate New York. They met in 2005 at Synlait Farms (now Purata Farms) where Michael started as a farm assistant and Susie as a calf rearer. They married in 2009. 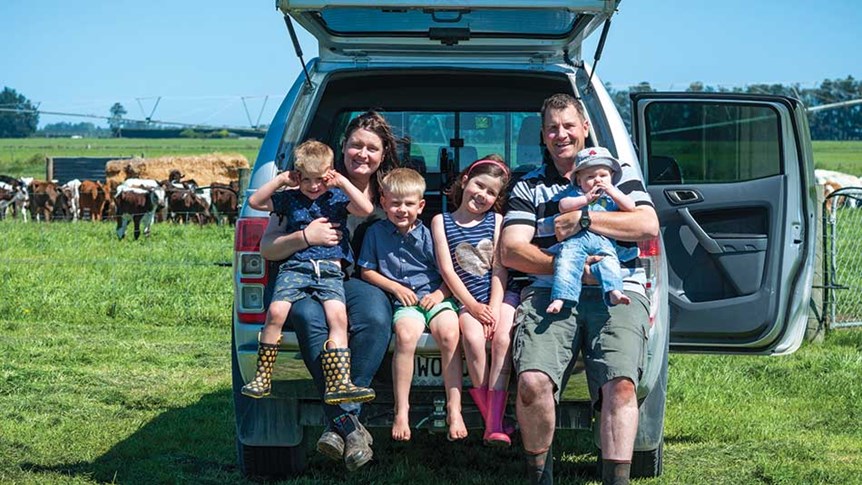 Susie and Michael Woodward will move to their new farm in June.

The thought of farm ownership didn’t enter their minds until a bit later. “At the beginning, we weren’t sure of the way forward because we were young and finding our way,” says Michael.

They grabbed the opportunity offered by large-scale farming to rise through the ranks at Synlait. The couple progressed from farm assistants to farm managers, then contract milkers, before becoming 50:50 sharemilkers at the start of the 2014/15 season. Their gradual steps up the career ladder helped them to learn about staff management and how to make a farm run smoothly.

Michael and Susie didn’t wait for jobs to be advertised. Instead, they approached people with proposals and negotiated arrangements outside the standard contracts.

“We never waited to be asked; we always pushed to get ahead,” says Michael. “That’s how we became farm managers and subsequently sharemilkers.”

“The course helped us to develop some essential skills,” says Michael. “Through it, we met people who’d gone through the industry and were probably five years or so ahead of us. They were able to tell us how they’d progressed and what they’d done to achieve their goals.”

Biz Grow also helped Michael and Susie “put themselves out there” by entering the New Zealand Dairy Industry Awards. They entered in the Canterbury/North Otago region for the first time in 2009 – and got a wake-up call.

“The judges told us we had good on-farm management skills, but that our financial management was very poor,” says Michael. “That was the catalyst for us to get an accountant and a bank manager on board and to get some advice.”

That advice has paid off.

“We entered the farm manager section of the awards two more times, initially only placing second with no merits. But then, on the third time, we managed to win the financial planning and management award. And when we went to nationals, we placed third and received the same financial merit award. For us, that was a huge achievement. It showed that we’d taken advice and used it to push our business forward.”

Michael and Susie’s road to farm ownership hasn’t been without sacrifices. They describe themselves as ‘farm orphans’ because they didn’t have family farms to fall back on.

“Over the last 16 years, we’ve saved hard and sacrificed being away from family. We could have worked closer to family, but it would’ve been on smaller farms,” says Michael.

“To get ahead, we’ve used the scale that’s around in the industry and some of that comes with its own challenges, like managing a big team. It’s difficult to keep everyone happy all the time, but it’s been a good learning curve.”

The Woodwards began their hunt for a farm late last year. They looked at two farms in the Waikato and missed out on one, before buying the other in February this year.

“We wanted a farm that had character and was self contained, because if there are wall-to-wall cows, you’re paying wall-to-wall prices,” says Michael. “We also wanted to pay it off relatively quickly, certainly by the time we’re 60. It also needed to be big enough that if we decided to retire, the option was there for one of our children to take it over. So, it had to be bigger than 300 cows because, if you’re below that, it’s really hard to justify someone else coming in to help.”

Their new farm at Otorohanga meets all these criteria: it’s a 350-cow farm, all stock will be wintered on, and the young stock grazed on-farm for the whole season. This means less costs and the potential to have a part-time worker.

“Susie and I are keen to get back hands-on because we’ve been using our heads more than our hands in the last few years,” says Michael. “We’re looking forward to the next stage in our farming careers."

Michael and Susie's to tips

This article was originally published in Inside Dairy May 2019

Inside Dairy May 2019 online

Want to read more online articles from Inside Dairy May 2019? Click here. 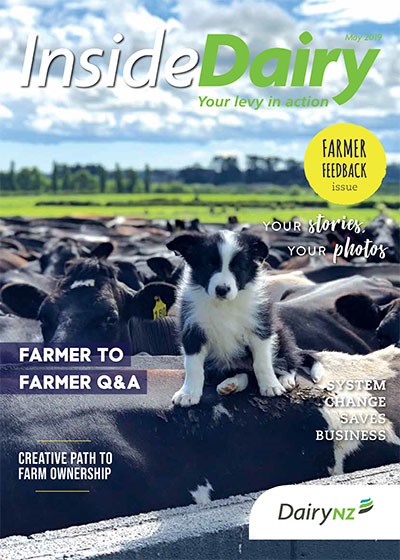