Despite being impacted by tough drought conditions, dairy farmer Chris Davison cannot wipe the smile off his face, nor can his wife Rachel, or his mum or twin brother. 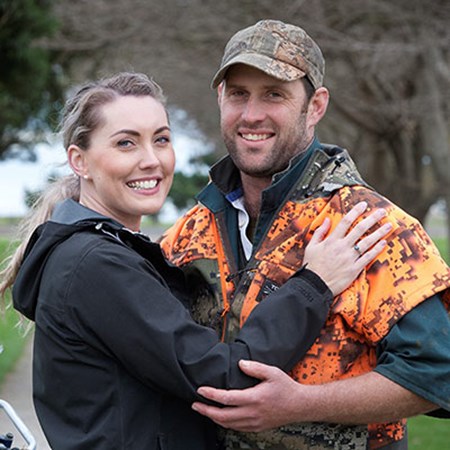 Chris, who sharemilks 1,000 cows on the family dairy farm five minutes from Whanganui’s Kai Iwi Beach, has been named a gem of a dairy farmer by DairyNZ, the industry body for dairy farmers.

His prize is a sparkling diamond ring, donated by Auckland jeweller Mark Beckett and his wife Pamela. When Chris got his hands on the ring, he placed it on Rachel’s finger to say thanks honey, for all your love and support.

Chris says it was a great surprise to hear he had won the diamond for being a great farmer.

“It’s right at home on Rachel’s finger, a nice reward for the demanding role of being a mother and a farmer’s wife. She’s the true gem of this outfit.”

The diamond – a rare green one which may be the only one in New Zealand – was gifted by the Becketts to show their admiration and appreciation for New Zealand dairy farmers for the work they do every day of the year, and in all weather.

It was the grand prize in a promotion coordinated by DairyNZ to find a ‘hidden gem’ of a dairy farmer – a farmer who is the epitome of New Zealand dairy farming looking after their animals, people and the environment, and therefore deserving of the special diamond.

In announcing Chris Davison as the winner, DairyNZ found he met strict criteria. DairyNZ Acting GM Farm Performance Sharon Morrell says competition for the prized diamond was hot, with more than 400 nominations received for deserving dairy farmers around the country.

Chris says he was extremely encouraged to see such a kind gesture extended to dairy farmers from the heart of Auckland.

“This act of generosity is a good reminder that, by and large, most Kiwis appreciate and value what we farmers do. I’m sure many other farmers would feel the same way.”

The fourth generation of his family to run the farm, Chris was nominated by his mother Jeanette and twin brother Blake, a milk tanker driver. In his nomination, Blake says Chris is an all-round good guy.

“He’s an outstanding dairy farmer, employer, husband and father. I love him and nominating him to win this diamond is my ‘bro-mantic’ way of showing it.”

In her nomination, Chris’s mum Jeanette says: “Christopher is an absolute gem. He’s made a fantastic job of sharemilking on our family partnership farm… including the health, care and reproduction of the animals, managing the feed requirements, managing staff and all of the other aspects of running his own business”.Although the past 40-plus years of their lives have revolved around precious gems, both Mark and Pamela Beckett hail from dairy farming families.

“Even back then, our farming families had a long-term view of environmental stewardship – everything my father did on the farm was to care for the land and his animals,” Mark says.

“We saw the opportunity to give away this appropriately green coloured diamond to thank the good farmers for their hard work, both as stewards of the land and for bringing us milk.”

In his decades as a jeweller, Mark, who is London-trained, has only once before had a green diamond, although he has had plenty of yellow and pink diamonds, and some blues.

He has an interest in the rare and unusual. In the collection in the Becketts’ Newmarket jewellery shop is a fossilised dinosaur egg.