Jewellers gift a diamond to show their love for dairy farmers

Jewellers gift a diamond to show their love for dairy farmers

Auckland jewellers Mark and Pamela Beckett are showing their love for New Zealand dairy farmers by giving away a two-carat diamond valued at $12,000. 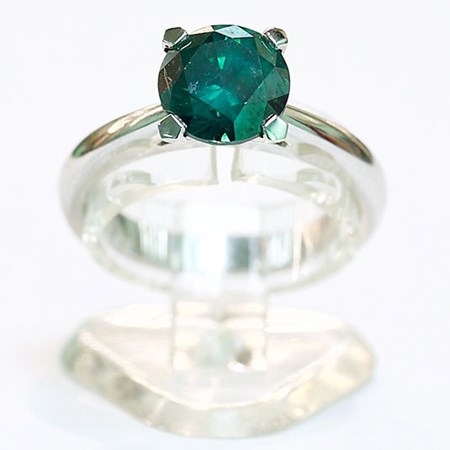 They want to show their support for dairy farmers and their appreciation for the work they do every day of the year, and in all weather.

And it’s not just any old diamond – it is a rare green diamond, and quite possibly the only one in New Zealand.

“Our lives over the past 40-plus years have revolved around precious gems and we believe Kiwi dairy farmers are gems too,” says Mr Beckett, who is London-trained.

“We reckon this rare green diamond is the perfect way to celebrate our dairy farmers who are committed to caring for our land and environment, and, we believe, just like diamonds, that they are here forever.”

The diamond is the prize in a promotion organised by DairyNZ, the industry good body representing New Zealand dairy farmers.

Until March 10, when the promotion closes, anyone can nominate a dairy farmer they feel is worthy of receiving the diamond. The winner will be announced between March 16 and 18.

“This is such a thoughtful gift – a true surprise and delight for farmers. While we receive praise and recognition for the work our farmers and their teams are doing on-farm and in their surrounding communities, this is the first time anyone has expressed their admiration and thanks in this way.”

The Becketts both hail from dairy farming families. Mark was raised on a dairy farm in Matamata in the dairy heartland of the Waikato, while as a child Pamela often visited her grandparents’ dairy farm – land that is now part of Auckland Airport.

“Even back then, our farming families had a long-term view of environmental stewardship – everything my father did on the farm was to care for the land and his animals,” says Mr Beckett.

“It’s my opinion that dairy farmers more environmentally green than most – certainly greener than many non-farming people because of the work they do to protect the environment.

“We see some dairy farmers getting bad press for allegedly stuffing up the streams and their cows get the blame for global warming. We saw the opportunity to give away this appropriately green coloured diamond to thank the good farmers for their hard work, both as stewards of the land and also in bringing us milk.

“It feels like the natural thing for us to do.”

In his decades as a jeweller, Mr Beckett has only once before had a green diamond, although he has had plenty of yellow and pink diamonds, and some blues.

He came across the one he is giving away in a collection of estate jewellery in Australia where it had been part of a family collection for several generations.

He says the most famous green diamond is the Dresden green diamond, which was found in India two centuries ago and is named after the German city where it is mostly on display except when it is being loaned to other museums and galleries.

In answer to the question of how green diamonds come about, Mr Beckett believes scientists have not as yet been able to provide a conclusive answer.

He prefers the outer space theory: “All the elements that go to make a diamond green are present on a number of planets”.

Along with appreciating dairy farmers, he and Mrs Beckett have a love for collecting the unusual with various conversation pieces on display in their jewellery shop in Newmarket, Auckland.

Among the treasures is a fossilised dinosaur egg they had x-rayed a few years ago to show the immature dinosaur inside the egg.  They have been advised it is a therizinosaurus which once roamed parts of China and Mongolia about 70 million years ago.

To nominate a gem of a dairy farmer go to dairynz.co.nz/diamonds

Win a $12k green diamond for a hidden gem.