Pasture management is their number one priority, but their resilience through recent challenging weather conditions has seen them adapting what they do and how they do it. It’s also provided them with opportunities for continuous improvement. 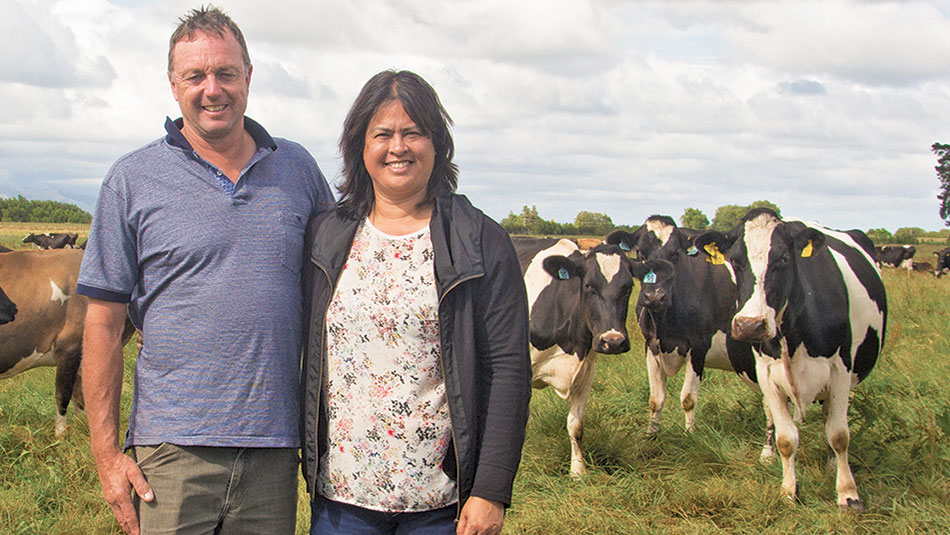 Robert and Colleen Ervine: achieving profit at a reasonable level means controlling costs and considering the benefits of any spending.

Robert Ervine grew up on a beef and sheep farm in County Down, Northern Ireland, and he’s always wanted to own a dairy farm. During his student days in Ireland, he relief-milked on neighbouring dairy farms while completing a Diploma in Agriculture at Greenmount Agriculture College in Antrim.

He came to New Zealand on holiday in 1990 and fell in love with the countryside. He was struck by the way farmers here shared information and the number of opportunities there were to progress to farm ownership. In just over 10 years, hard work and determination have enabled Robert to turn his farmowning dream into a reality.

Starting as a farm assistant in 1991, Robert moved through the ranks to become a 150-cow, 50:50 sharemilker, before he progressed to an 800-cow sharemilking operation in the Manawatu. In 2002, he bought Westmere dairy farm, a 20ha property which also came with a 70ha leasehold block at Rangiotu. A lower-order sharemilker managed the Rangiotu farm while Robert continued sharemilking his 800- cow herd. In 2006, Robert got divorced, sold his 800 cows and started again as an owner/operator with a lot less equity. In 2009 he remarried, and Colleen and Robert purchased a neighbouring block, adding 50ha to their Rangiotu farm.

The farm is not without its challenges. A large part of it is inside a loop of the Manawatu river. The 70ha leasehold block on the farm can be flooded within hours of receiving a warning, which happens almost every year. The rest of the farm on the ‘right’ side of the stop bank can also be submerged in major floods. Floods in 2004 and 2015 saw almost all of the farm go underwater. The feed pad is used regularly during these events as is a strategy for keeping grass silage for feed at these times.

“In both floods, water receded within 36 hours, but during these events it’s a stressful time for farmer and livestock. Making small decisions like culling some cows, drying some off and grazing out heifers is the trick to resilience,” says Robert. The farm is a system two, and they’ve taken the option of once-a-day milking in the short term, to take pressure off the herd and off paddocks more likely to be damaged by herd movement during this period. “Half the Manawatu has been on once-a-day milking since December and most people are feeding supplements.”

We’ve had terrible weather, so this year is looking grim. The puzzle we have, is how to build a system that copes with the very wet and the very dry. We can’t control the weather or the milk price, but we can control what we spend. We have relatively-low stock numbers, and we aim for 450 kilograms of milk solids (kg/ MS) per cow to achieve a reasonable per-hectare production level. The ‘P’ word we are interested in is profit, but to achieve this at a reasonable level we need to control costs and consider the benefits of any spending.”

In the past, the Ervines have grown chicory on 10 to 12 percent of the farm, as well as turnips and three to four ha of maize silage. In mid-July, floodwaters were at the top of the fence posts and pasture was damaged. Then the wet spring continued right up to late October, so Robert and Colleen made the decision to double the maize crop to eight ha and not grow the other crops. “It’s a decision we have been very happy with. Most chicory and turnip crops have struggled in the very dry conditions.”

Keeping an eye on the bottom line

Robert and Colleen were case study farmers for the DairyNZ Tactics campaign. Robert says this made them look at the budget line-by-line to identify where they could make efficiencies. Because of the bad weather, strategic purchases and farm maintenance were postponed. Race maintenance is being kept to a minimum, but it is still prioritised, as lame cows are no fun to deal with. Soil testing once a year on five areas of the farm has identified a drop in soil fertility in some parts, but no problems in others, so fertiliser application has been adjusted accordingly. The simple expedient of a $500 soil test has led to a $6000 saving on fertiliser.

Robert and Colleen employ a herd manager, Jacqui Denton, who has been at the farm for six years; a recently-recruited farm assistant, Kaylaan McGuckin; and a part-time farm assistant, Robert Allardice. They are encouraged to set goals and take up learning opportunities, which Colleen and Robert help to fund.

Robert and Colleen use a team of advisors including an accountant, bank manager and consultant who all gather around the table to get a rounded-out group of opinions. This enables informed, timely decision-making when it matters. The couple agree that the sector in New Zealand is unique for the support that is out there and the willingness of other farmers to share advice.

The Ervines are very aware of sustainability and they say the biggest challenge this season has been the necessary use of palm kernel expeller (PKE) to combat the wet – then dry – weather. “Even with a lower stocking rate, we have not been growing enough grass to feed the herd. But who has?” says Robert.

Looking at farm efficiencies, automatic cup removers will be installed for next season to prevent over-milking and improve staff productivity.

Robert and Colleen have met all requirements under the Water Accord and they are keen to do more. They recently sat down with their Fonterra Sustainable Dairy Advisor and Horizons Regional Council and drew up plans for several native planting areas on the farm.

“We’re not allowed to plant on the flood-prone leased area as this would impact on flood conveyance. However, we intend to plant on other parts of the farm at the end of next season, put a new line in the budget and make a start on the project.”

The Ervine’s top tips for adapting to changing conditions

This article was originally published in Inside Dairy March 2018

Prolonged wet weather can saturate soils, affecting the ability of farmers to farm as they would normally. 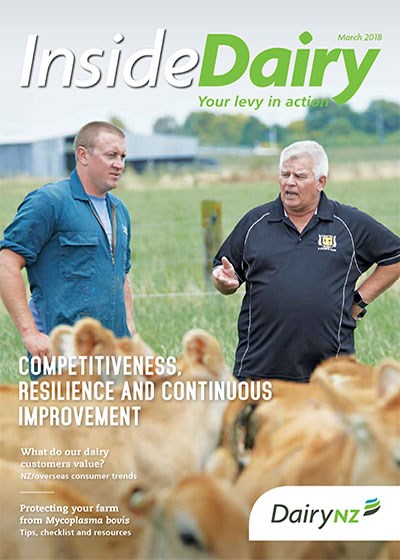