Southland farmers Simon and Mo Topham have always taken genetics seriously, but especially so when milk prices took a dive in 2014/15. As they sought to make every dollar count, the couple put all aspects of their business under the microscope – including their breeding programme. 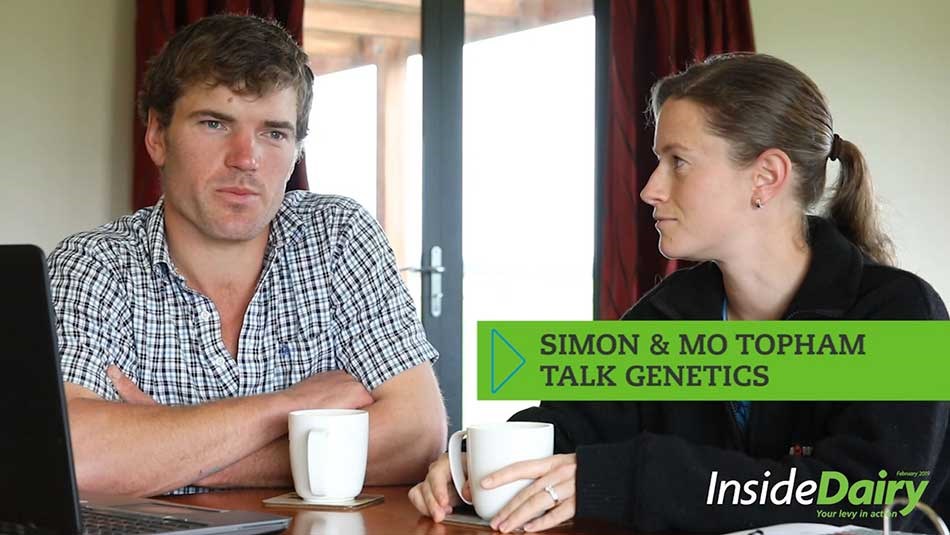 When Simon Topham began sharemilking in 2009, he bought 300 cows to make up his core herd. These cows had good conformation, Breeding Worth (BW), Production Worth (PW) and records. He also leased some first-time calvers. The rest of the herd was a mixed bag of cheaper cows that he planned to keep for a year or two. Over the next five years, Simon worked to build up the size of his herd and improve its quality.

It was during this time that Mo moved to Southland to start working as a trainee consulting officer for DairyNZ. A colleague gave her Simon's details, suggesting he'd be a useful go-to farmer for local advice. It turned out they were a perfect match – the pair married in February 2016. 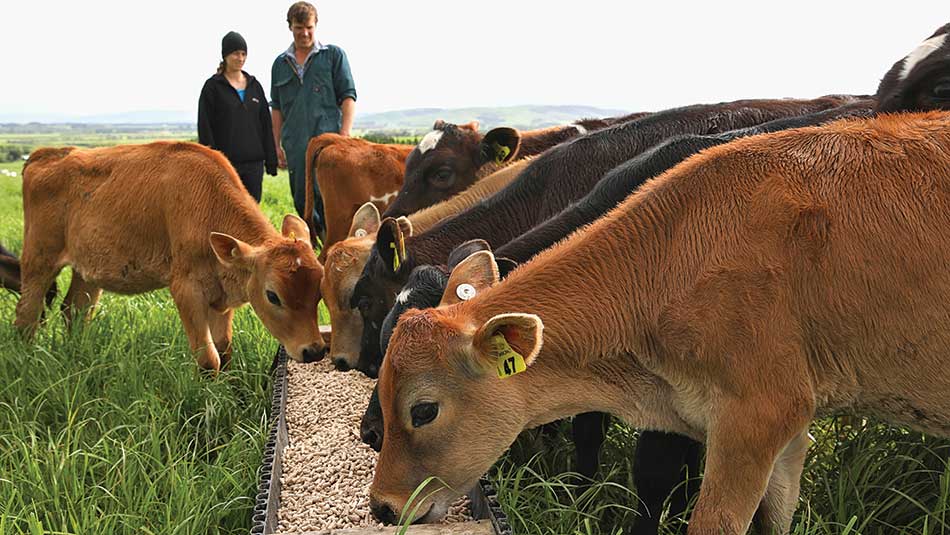 Genetic gain has resulted in the Tophams' herd becoming healthier and more resilient.

The elites and the ‘motley crew’

When the first low payout season hit, the Tophams looked at how to design the most cost-effective breeding plan. At the time they were doing six weeks of artificial insemination (AI) and six weeks of natural mating.

The couple looked at a number of scenarios, including both increasing and decreasing their use of AI.

“In the end, we went through our entire herd and created two groups: the good cows, and the not-so-good cows (christened ‘the motley crew’). This mob was made up of 75 cows (15 percent of the herd) that we didn’t want to keep heifer calves from,” explains Mo.

These cows were chosen based on somatic cell count (SCC), feet, udders, general conformation, BW, PW and calving date. The animals were run with Angus-Hereford bulls for the entire mating. In the second cycle, the Tophams identified another 15 percent of the herd and added them to the ‘motley crew’. For this group, Simon and Mo were happy to keep the progeny only if they got in calf in the first cycle and, therefore, had good fertility. Doubling the size of the ‘motley crew’ in the second three weeks meant the natural mating bull team was maximised, AI costs were minimised, and the workload on-farm was reduced because there was less time spent picking in-heat cows.

“Admittedly, we did this for only one year,” says Mo. “We became less picky from then on. We used Angus-Hereford cross bulls to identify the non-dairy calves at birth. Our herd leans towards Jersey, so some calves came out tiger-striped, and weren’t that easy to sell, but we managed to sell a good number to family and others in the area.” 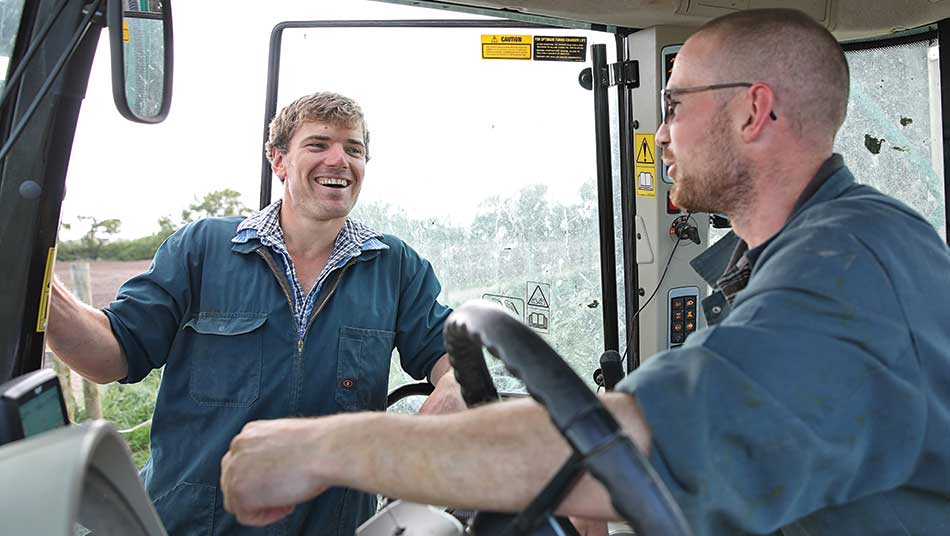 Simon chats with second-in-command Dave Milford, on a break from spreading urea.

One of Simon and Mo’s biggest surprises was seeing far fewer beef calves born than expected. This was because the cows in the ‘motley crew’ were of lower fertility (mastitis, late calvers etc.), so a lower percentage got in calf. Apart from cows in the elite herd that didn’t get in calf, the culled cows all came from the ‘motley crew’.

“We’ve now realised that it’s a waste of money to put a straw of good semen into a bad cow that we’ll eventually cull. So, if we use bulls or cheaper AI straws, we save money in the short term and get better replacements in the long term. All in all, we have fewer poor-quality heifers coming into the herd,” says Simon.

“We have one animal that’s full Jersey and one that’s full Friesian and everything else is somewhere in between. Our herd averages about 500 kilograms (kg) liveweight – that suits our shed. We don’t want animals that are completely different sizes because that can be tricky to manage.”

The Tophams’ idea of a robust herd is one whose cows are producing 100 percent of their liveweight, have no mastitis or no lameness, and get in calf without intervention. 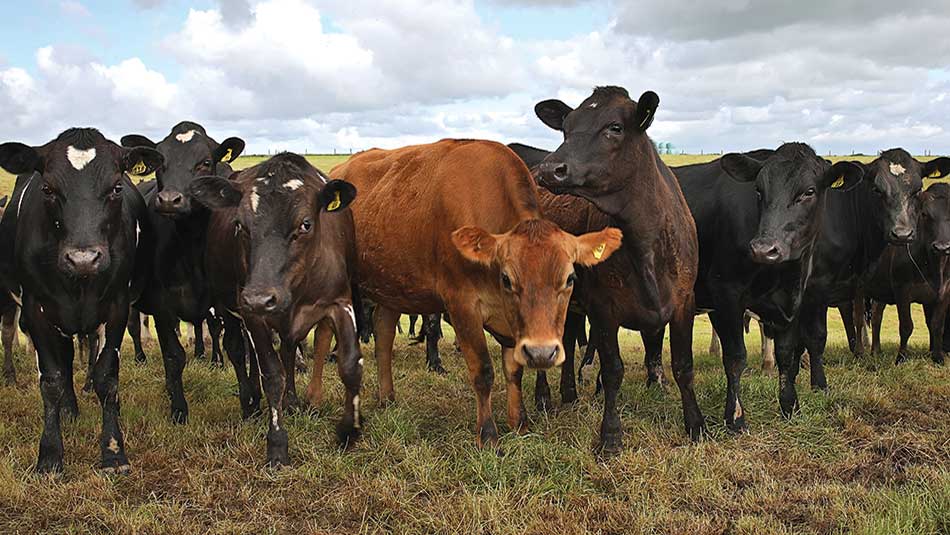 Simon and Mo lease a family farm and are investors in an equity partnership. On their own farm, they run a 515 spring-calving herd. The couple’s assets are similar to a 50:50 sharemilker’s, so they’re mindful of how important it is to maximise the herd’s value and saleability, while also maximising its productivity.

Genetic gain has resulted in the Tophams’ herd becoming healthier and more resilient. Their cows bounce back quickly after short periods of bad weather, without a detrimental effect on the season’s production. Simon and Mo have also found that animal health costs lean more towards preventative measures than treatment. SCC, mastitis and lameness have each reduced, contributing to a lower cost of production.

Mo says the other thing they’ve noticed is that the twoyear- old heifers they’re bringing into the herd now are much better quality.

“Previously we probably got rid of three or four percent of heifers before December because they didn’t milk, or they had horrendous udders or conformation. This season we got rid of one-and-a-half percent. This is all a costsaving to the system.”

Strategic use of once-a-day

The Tophams use a significant amount of once-a-day milking (OAD) in their system. Half the herd goes onto OAD during March and April, and most of the herd in May and August. Simon says this used to be quite detrimental to production, but it’s become less so over time.

"At the start of the season, once-a-day reduces stress on the herd and the team so they're fresh when things get really busy in September. The team have more time to ensure jobs are done perfectly and this helps to set up the herd for the rest of the season." 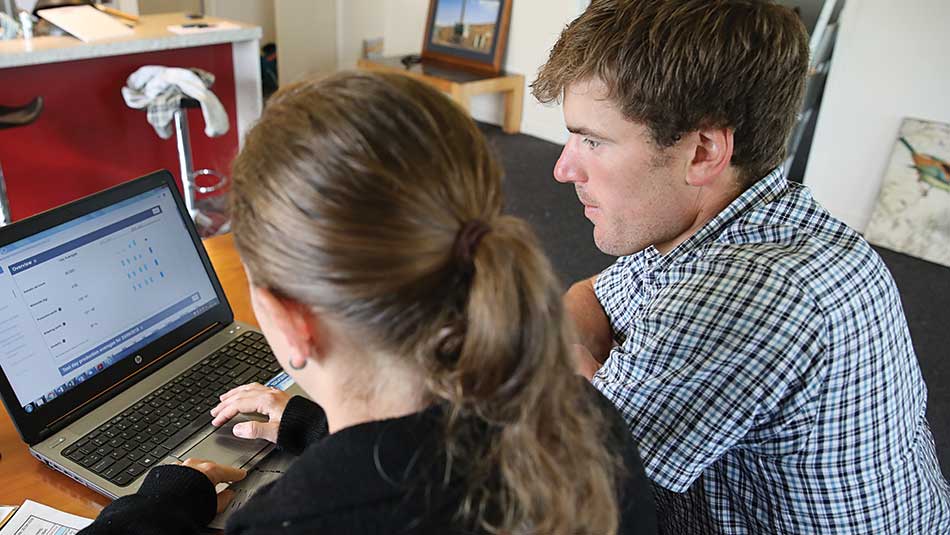 Mo and Simon use herd management system Minda to record data for Breeding Worth, Production Worth and somatic cell count.

Simon and Mo started DNA testing this year and are looking forward to the improved reliability this will offer. They use herd management system Minda, herd-test four times a year and have Minda data for PW, BW and SCC. The couple use Protrack to record mastitis treatment.

“Mastitis is a work in progress,” says Simon. “We had quite a lot when we first started, but it’s been tracking down every year. We don’t use excessive dry cow treatment. For about two-thirds to three-quarters of the herd, we’re only using teat seal. There are many spokes to the mastitis wheel and you need them all to keep the wheel running smoothly. Of course, that’s true of farming in general.”

The Tophams weigh their young stock at key times of the year to ensure they’re at target weight, and they monitor the herd on body condition score.

“In future, we’ll probably weigh all our first calvers as part of Livestock Improvement Corporation’s (LIC) sireproving scheme. It will be interesting to see how that affects the BW of those cows,” says Simon. 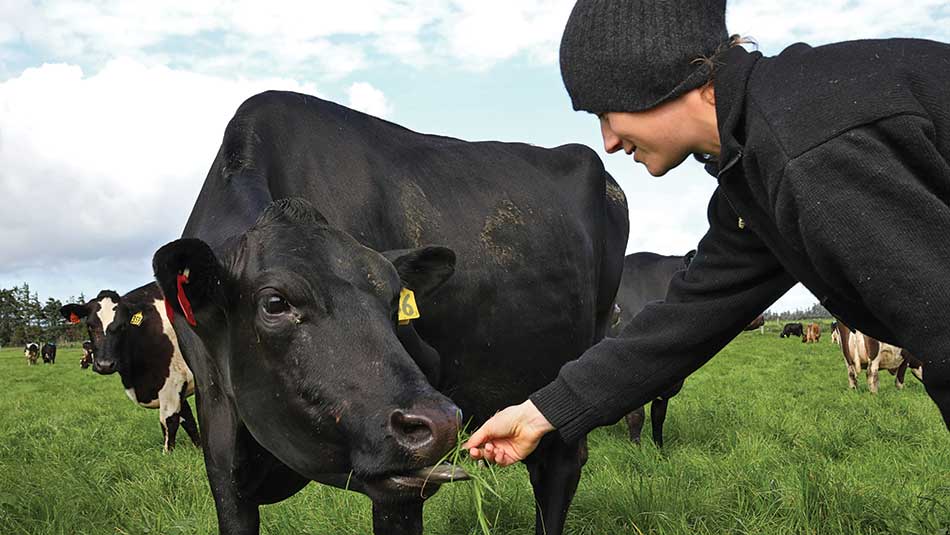 Mo says it’s important to think about the cows you want to milk in the next three to 10 years’ time.

“The decisions you make when selecting your bull team are crucial. You spend a lot of time in the cowshed milking cows, so it’s worthwhile to breed cows that will achieve the results you want and that are enjoyable to milk."

Top tips from the Tophams 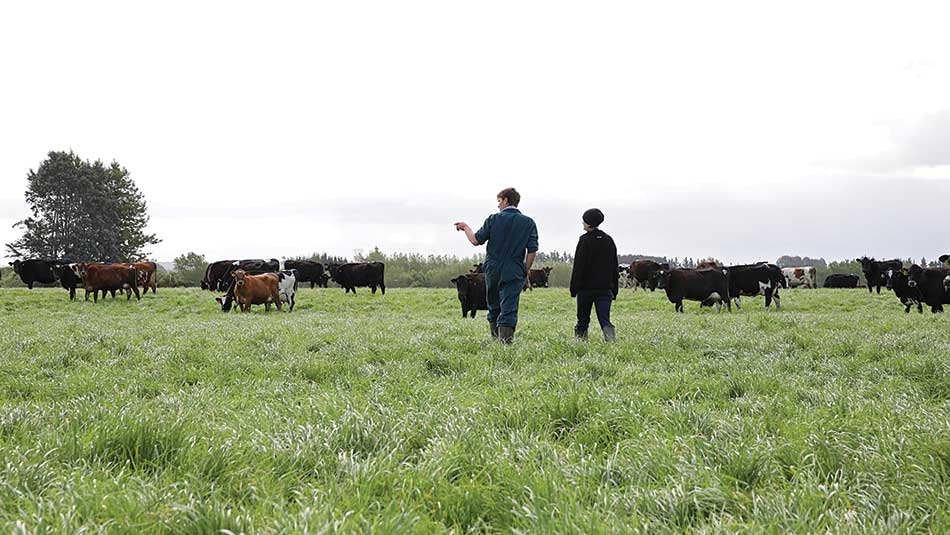 Simon and Mo believe a robust herd is one whose cows are producing 100 percent of their liveweight, have no mastitis or no lameness, and get in calf without intervention. 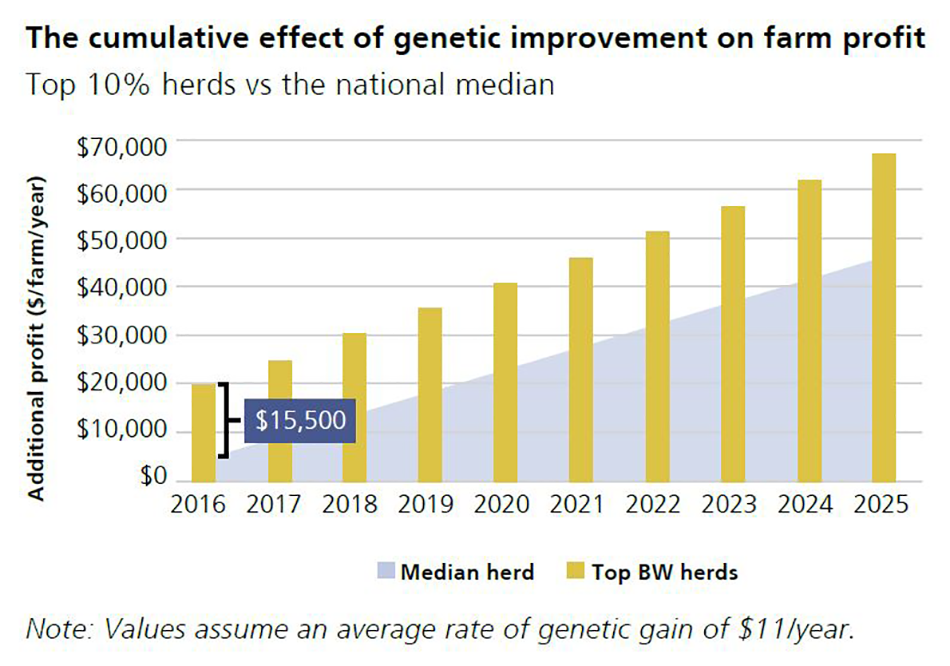 What's the value of genetic gain?

“A herd in the top 10 percent nationally is estimated to be generating around $36 extra profit per cow every year, or $15,500 extra, when compared to the average herd, if both herds were run under the same conditions.”

Use DairyNZ’s Bull Team Builder tool to create the perfect bull team. Check it out at dairynz.co.nz/bull

Animal management is a critical component of farm profitability and sustainability. To learn more about genetics, herd management and more, visit dairynz.co.nz/animal 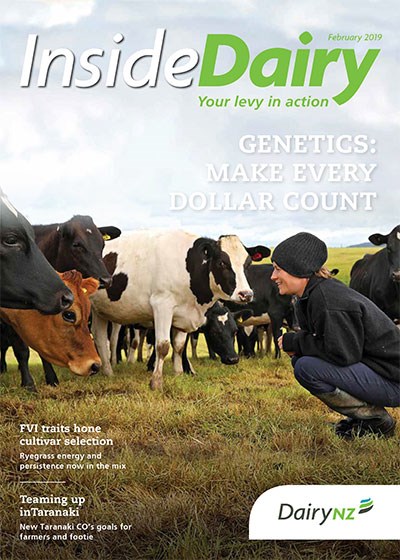