Converting from pines to pasture has been an environmental balancing act for Ngāi Tahu’s Paritea Farm in North Canterbury. Having used large amounts of nitrogen to break down carbon in the soil, Ngāi Tahu is now looking at scientifically-proven ways to reduce nitrogen use as part of DairyNZ’s Forages for Reduced Nitrate Leaching research programme.

When Shane Kelly joined Ngāi Tahu Farming as rural project manager in 2013, his job was to oversee the conversion of 3900ha of forestry land to irrigated pasture. Keen to apply the latest science-backed farming practices, he and the iwi quickly put their hands up to take part in the Forages for Reduced Nitrate Leaching (FRNL) research programme.

FRNL is a six-year DairyNZ-led programme looking at how to target different aspects of the nitrogen (N) cycle to reduce nitrate leaching. These include reducing the N content of animals’ diets, altering urinary N excretion, and increasing N uptake by pasture or crops. “Becoming part of the FRNL research project in 2014 was an opportunity for Ngāi Tahu to implement best practice and integrate the research findings into its dairying business,” says Shane, who is now Ngāi Tahu Farming’s general manager of dairying.

“Because Paritea Farm is on ex-forestry soils, it historically used significant amounts of nitrogen to assist with carbon breakdown, so in this context, it’s very important for us to explore good research.”

Paritea Farm is part of the Ngāi Tahu Te Whenua Hou farming development north of Christchurch and is one of nine monitor farms in Canterbury contributing to the FRNL research project.

The monitor farm network includes a mix of dairy, arable, sheep and beef, and mixed arable/dairy properties. Farmers and scientists work together to put theory into practice and monitor the results.

So far the FRNL research has identified three promising options – the use of plantain, fodder beet and a catch crop – that significantly reduce nitrate leaching. Shane says all three techniques are being applied at Paritea with encouraging results:

See table at end of article for details.

What changes have they made?

Since being involved in the FRNL project, the team at Paritea Farm has: FRNL research has shown that, when managed properly, fodder beet can lower animals’ N intakes and urinary N excretion without negatively affecting their health and productivity.

Custodians of the land

Ngāi Tahu Farming was also involved in the DairyNZ’s Pastoral 21 (P21) project to help understand the impacts of regional regulations limiting nutrient loss on-farm. Some of the principles of this research have been applied at Paritea, including lowering the stocking rate in the 2015/16 season to create efficiencies and reduce the N leaching number. 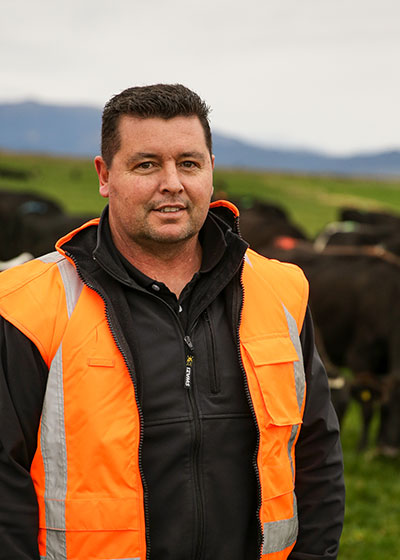 "We’re not in competition with our neighbours – it’s all about kaitiakitanga (stewardship) and long-term sustainability." Shane Kelly

“Projects like P21 and FRNL are a good fit for us and highlight what we can do to improve our environmental footprint,” says Shane.

“This programme provides us as custodians of the land with scientific research that will help us raise the bar and showcase the investments we’re making.

“It’s all about giving confidence to the iwi and showing that we’re doing everything we can to be leaders in this area. We also have a strong emphasis on sharing our knowledge with the farming community for the overall benefit of the sector. We’re not in competition with our neighbours – it’s all about kaitiakitanga (stewardship) and long-term sustainability,” says Shane.

DairyNZ senior scientist Ina Pinxterhuis, who’s leading the FRNL programme, says the aim of having farmers involved in this research programme is to get feedback on proposed mitigation options and on results from the various experiments.

“The farmers certainly delivered on this. We’ve had great workshops with robust discussions – for example, around practicality or consequences researchers hadn’t thought about. This changed the research direction in several cases,” says Ina.

“The farmers also demonstrate what they are doing to reduce environmental impact and how they go about implementing the new options. The detailed data they collect is invaluable to evaluate the impact at the scale of commercial farms. I think we have achieved a unique collaboration between farmers and researchers.”

Shane says not everything they try works, but one of the best things about being a monitor farm is the support from DairyNZ to make changes.

“We’re looking at ways to oversow plantain to fit into the existing sward and while we’ve had some problems with drilling, nutting out the best way to do it has been relatively easy.”

The big changes for Paritea have been incorporating plantain within the ryegrass mix and introducing fodder beet and catch crops. Shane and his team aim to incorporate plantain with other grasses on 30 percent of the farm.

“Our aim is to incorporate plantain with other grasses on 30 percent of the farm to form an intensive grazing system using fodder beet and catch crops,” says Shane. “Fodder beet is used for transitioning into winter, and oats are planted in June to capture N in the soil left after grazing the fodder beet.

“Oats soak up some of the 200 to 250 units of N that would be sitting there at risk of leaching if the land was fallow. So, using oats is beneficial when it comes to retaining N in the system, which can be used to replace other imported supplement or nitrogen fertiliser at other times in the year. This is probably a break-even proposition in financial terms, but a positive outcome for the environment,” says Shane.

“I believe we need to think in 10-year cycles when it comes to system change. The exciting thing is that in another 10 years scientists will have come up with other solutions and we’ll be embracing different techniques.”

Shane says there aren’t too many implications in managing the new system apart from getting your eye in when using plantain. Paddocks can look patchy and look worse when the plantain goes to seed, he says.

“Visually, plantain looks different from ryegrass/clover cover for what’s on offer and it also looks different with plantain plants scattered across the paddock, especially when it’s flowering, so you have to bear this in mind when cows are harvesting, and recalibrate your eye. Pasture doesn't look so lush, which doesn’t necessarily mean it’s producing less, so farmers have to adjust their expectations of what ‘good’ looks like.”

Lifting our game – together

Shane says farmers sometimes complain about the levy, but he believes New Zealand dairy farmers are extremely lucky to have an organisation like DairyNZ that carries out research projects such as FRNL. Paritea Farm is home to a herd of 1050 predominantly Kiwi-cross cows.

“As a farmer I believe we need to celebrate our work, but that we also need to strive to be sustainable and strong, both socially and environmentally. We may agree to disagree on some things, but if we can all work together as a community, we will come up with solutions together,” he says.

“DairyNZ is an advocate for farmers at a higher level and we’re well supported when things go wrong. No other country in the world has the resources available like the toolkits and the comprehensive information available on the DairyNZ website. New Zealand dairy farmers are fortunate to have this model in place.

“From good science comes practical solutions and tools to help us operate more efficiently. As a result, a more sustainable farming model will be developed. The FRNL focus on leaching gives the sector an opportunity to showcase innovation and to have a positive impact on the image of farming, but more importantly a positive outcome on water quality within the catchment and, as a result, benefits for the entire community.”

In all its work Ngāi Tahu considers the whakatauki (proverb):

When land and water are sustained, the people will prosper.

# adopted FRNL mitigations of fodder beet (low-N supplement) on the milking platform. This paddock was re-sown in permanent pasture including plantain. Stocking rate was also decreased from 3.6 to 3.1 cows/ha to align with the decrease in imported supplement and N fertiliser.
@ Additional low-N feed used (maize silage). Autumn fodder beet followed by a catch crop of oats. Plantain continued to be established through pasture renewal as well as by undersowing 60ha.
+ Overseer version 6.3.0. The benefit of plantain is not fully reflected in Overseer.
* Fertiliser N + Supplement N – Exported Feed N – Product N

Forages for Reduced Nitrate Leaching is a DairyNZ-led collaborative research programme across the primary sector, delivering science for better farming and environmental outcomes. It runs until 2019 and the aim is to reduce nitrate leaching through research into diverse pasture species and crops for dairy, arable and sheep and beef farms. The main funder is the Ministry of Business, Innovation and Employment, with co-funding from research partners DairyNZ, AgResearch, Plant & Food Research, Lincoln University, Foundation for Arable Research and Landcare Research. DairyNZ invests $450,000 of levy funds each year. To learn more about the research, monitor farms and results, visit dairynz.co.nz/frnl