Successful businesses have one thing in common – they budget. Inside Dairy asked two top-performing farm businesses, one large and one small, how they take control of their spending to achieve their goals. 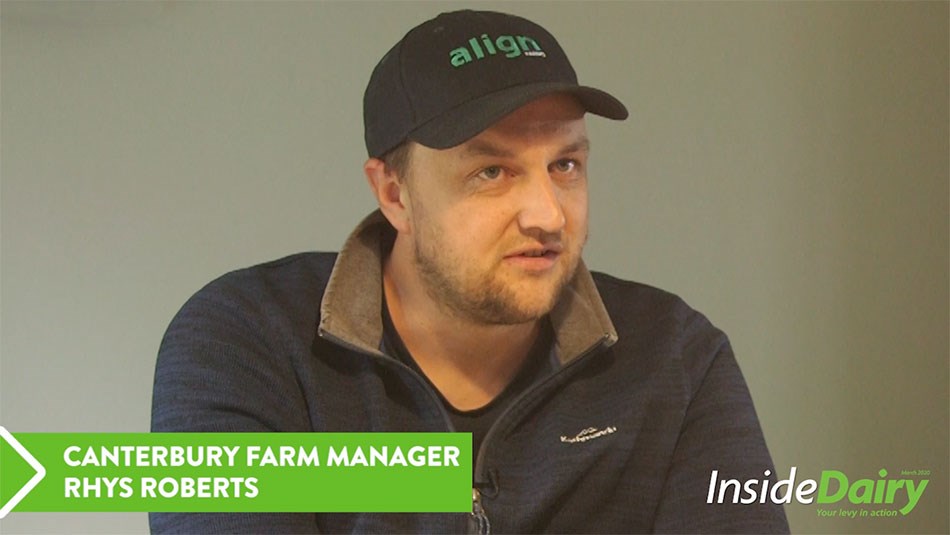 When it comes to budgeting, Rhys Roberts is the kind of person who’s constantly mulling over different ways to make the numbers work. 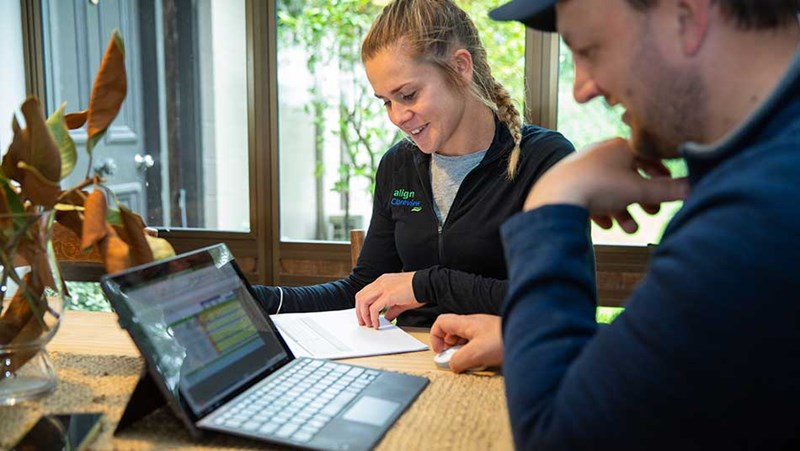 Align Farms’ general manager Rhys Roberts oversees all four of Align’s Canterbury farms. His wife Kiri manages one of them, Clareview Farm (also our photo location for their story).

“I’ve got the sort of mind that dreams up stupid things while I’m driving, so I often go home and jump on the laptop, pull up the budgets, and change them all around to see what works,” says Rhys.

“To be perfectly honest, I probably do that weekly. I change scenarios to see what effect they might have on production or Farm Working Expenses (FWE). We’re always looking at ways to drive efficiencies.” 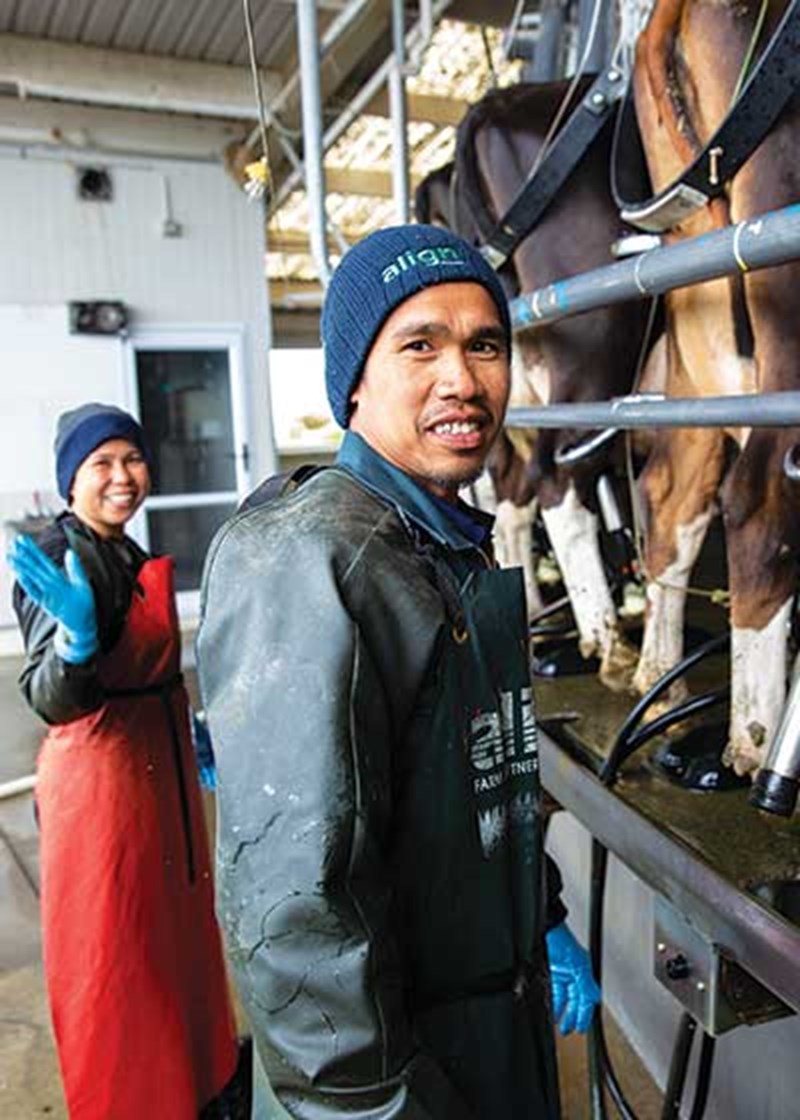 Rhys is general manager for Align Farms in Canterbury, a corporate farming operation with four dairy and two dairy support farms. The farms’ owners are based overseas, so budgets are an important way to provide accountability, as well as being a forecasting tool, says Rhys.

“The other reason budgets are important is that we’re educating our managers, who are the future owners of the industry. We want to make sure our managers are learning and looking holistically at the business, rather than focusing exclusively on milk production.”

Getting down to business

For Align Farms, the budget-planning process starts each year in March with the first of three planning meetings. In the first meeting, the four farm managers (including Rhys’s wife, Kiri, who manages Clareview) are given information to help them make decisions. This includes last year’s budgets, so they can review past performance, plus general ledgers and the proposed new season’s budgets. The managers have a month to make changes before submitting their proposals to Rhys and chief financial officer Michael Mansour.

“In April, Michael and I go through the budgets to streamline any group expenditure. Budgets are approved on May 1 and given to the Board for approval before they get locked in,” says Rhys.

Separate budgets are prepared for supplementary feed, capital expenditure (capex), stock requirements, grazing, and the number of calves to be reared. Each year, depreciation is spent on capex and Rhys is looking at ways to substantially reduce FWE through capex. Solar power is under consideration. 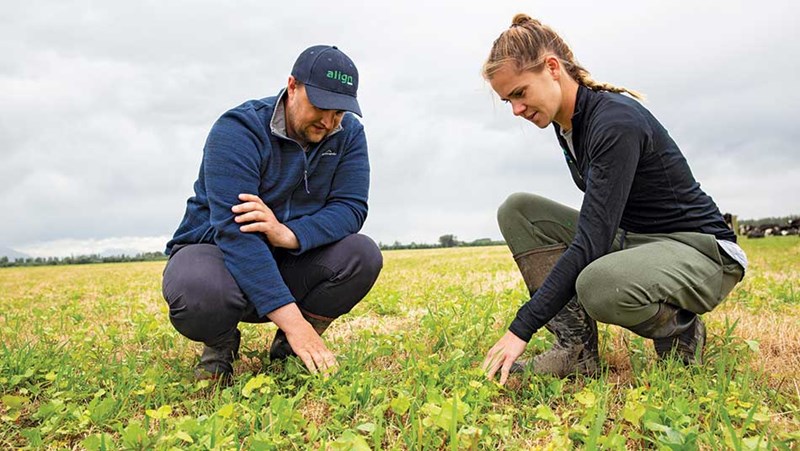 “We’re experimenting with diverse pasture mixes, with the intention of growing more feed in the shoulders of the season to reduce buying supplementary feed.”

Once the budgets have been approved, Rhys and Michael hold a monthly finance meeting to give the management team a chance to monitor actual performance against budgets.

“We go through group averages and discuss good and poor performance. We compare data against the previous season and forecast out to the end of the season as well. The budget never changes but the forecast does,” says Rhys.

Rhys favours focusing on the positives, rather than dwelling on what went wrong.

“We’re learning a lot more from reviewing what’s gone well and reminding people why we’ve been successful. In the past, we’ve been strict on managers sticking to their budgets and sometimes this can have a negative effect.” 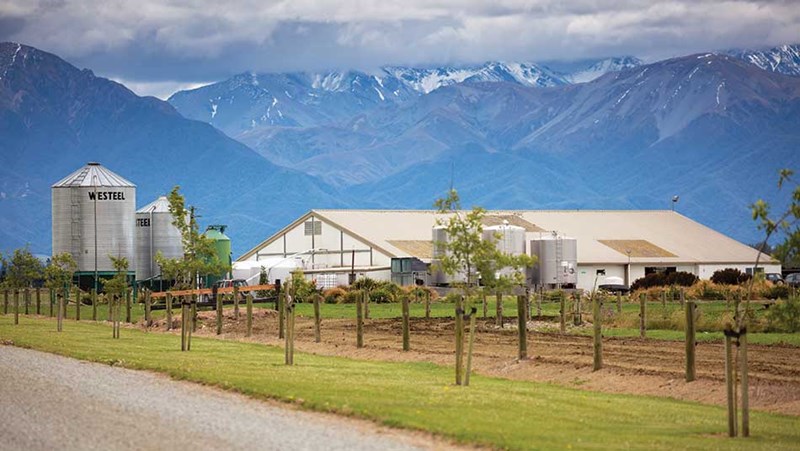 Align Farms once had a break-even payout of around $6.00 per kg/MS but focused on bringing it down and have now achieved their $5.00 target.

“We haven’t set up our system at the lowest end of the cost structure because we want to be able to take advantage of higher milk price seasons, but that’s just my philosophy,” says Rhys.

When it comes to planning for environmental obligations, “it’s not the cow, it’s the how, and farmers need to learn to adapt”, says Rhys.

"I’d be lying if I said I spend every day worrying about greenhouse gases. However, I feel this will be front of mind in future, but I do spend more time currently thinking about how we can mitigate our synthetic nitrogen use. I believe adaption and innovation will provide the answers. 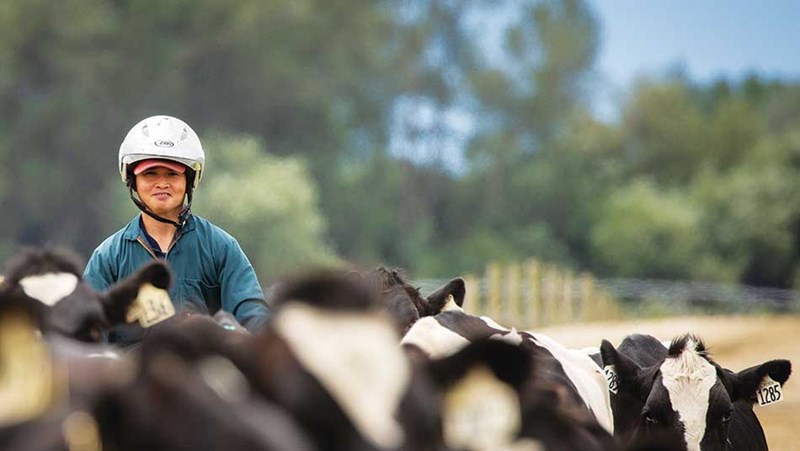 “We’re experimenting with diverse pasture mixes, with the intention of growing more feed in the shoulders of the season to reduce buying supplementary feed."

Rhys says Align has halved its nitrogen usage from 280 to 140 units per hectare by moving to a fluidising fertiliser application system, and they're using 2500 tonnes of compost as an alternative to expensive synthetic fertilisers.

“We don’t want to reduce soil fertility levels, so we’re still using DAP (di-ammonium phosphate) and potassium-based fertiliser as buffers, but we’re using less as we're buffering with compost. Stocking rate optimisation is another area – in some cases that means decreasing, in others increasing.”

Rhys has been involved in DairyNZ’s Budget Case Studies project since June 2017.

"The reason we joined was, in the past and still today, I get a lot from viewing and analysing the different case study budgets. The value it has given me and our business has been excellent." 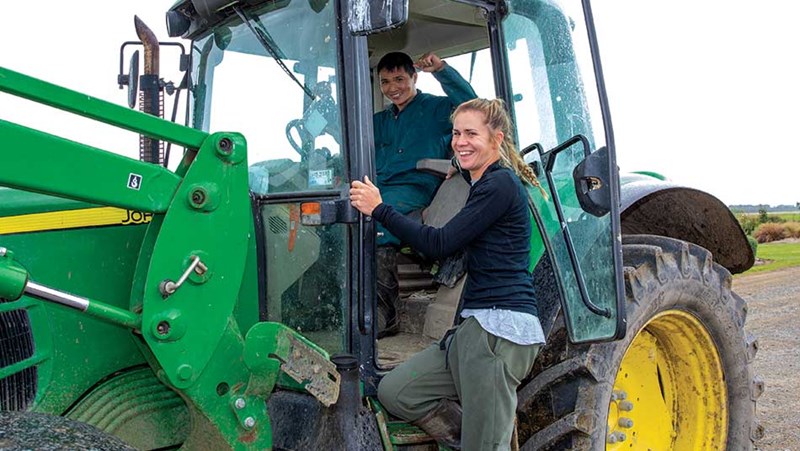 Most of Clareview's staff, including Teddie and Kiri, have been with the farm since it was purchased in 2013.

He says he’s been surprised at quite how interested farmers are in the project.

“I’ve done a lot of work with DairyNZ during my career, but I’ve never had so many calls about what we’re doing since I started the project. People either call up or stop you at an event to chat about budgets, whereas with a lot of other stuff I’ve done, you never hear from anyone.

“I think most people are good at three or four areas of farming, so being able to identify weaknesses and find people who are good at those and picking their brains is what it’s all about. Talking to others also gives you an understanding of New Zealand farming. Everyone has different challenges and we can all learn from each other.”

Eyes on the prize

Sarah and Ethan Koch know they won’t achieve their goal of farm ownership by chance. From the get-go, they’ve managed their finances carefully – first to become sharemilkers, and now to build equity in their pursuit of becoming farm owners. 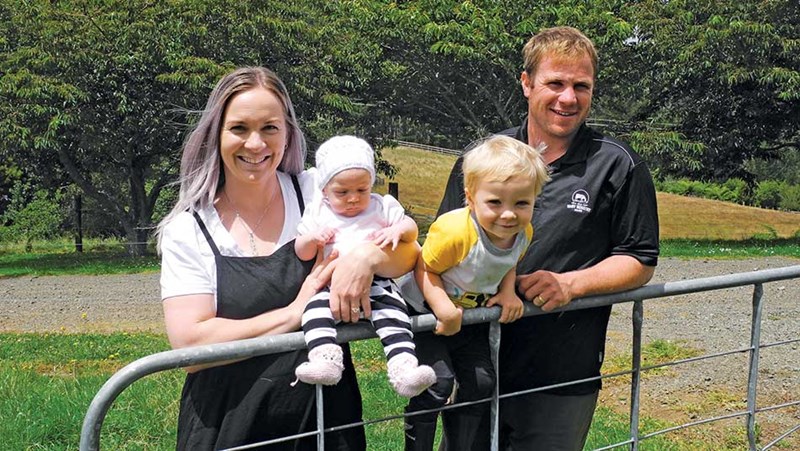 “We choose to keep our costs low and carefully manage our finances so that we can achieve our goal of farm ownership.”

When Ethan left his building career in 2012 to go farming on the Hauraki Plains, Sarah continued working as a teacher and they saved her entire salary for three and a half years. That enabled them to buy a herd and go 50:50 sharemilking in June 2016.

“We’re passionate about dairy farming and want to manage an efficient and profitable operation with emphasis on being good stewards of the land. We also want to have financial freedom, particularly as we get older and provide opportunities for our children,” says Sarah.

“We choose to keep our costs low and carefully manage our finances so that we can achieve our goal of farm ownership. This does mean some sacrifices for us in the meantime, but we are prepared to make those sacrifices with the end goal in mind.”

The Kochs set their new season’s goals in March and April. To help them make decisions, they use their previous year’s accounts, Fonterra’s forecast milk price, Federated Farmers’ salary information and DairyNZ’s Facts and Figures data.

“At first, Ethan and I discuss the budgets informally and use DairyNZ’s budget templates to formulate our plans,” says Sarah. “Ethan casts his eyes over them before they’re formalised, then I send them to the bank manager and upload them to Xero,” says Sarah.

“With bank lending being tighter, it’s important to be able to stick to your budgets so you can achieve what you want to do. Being able to demonstrate that you know what you’re doing and have sound budgeting skills gives you good credentials with your advisers.” 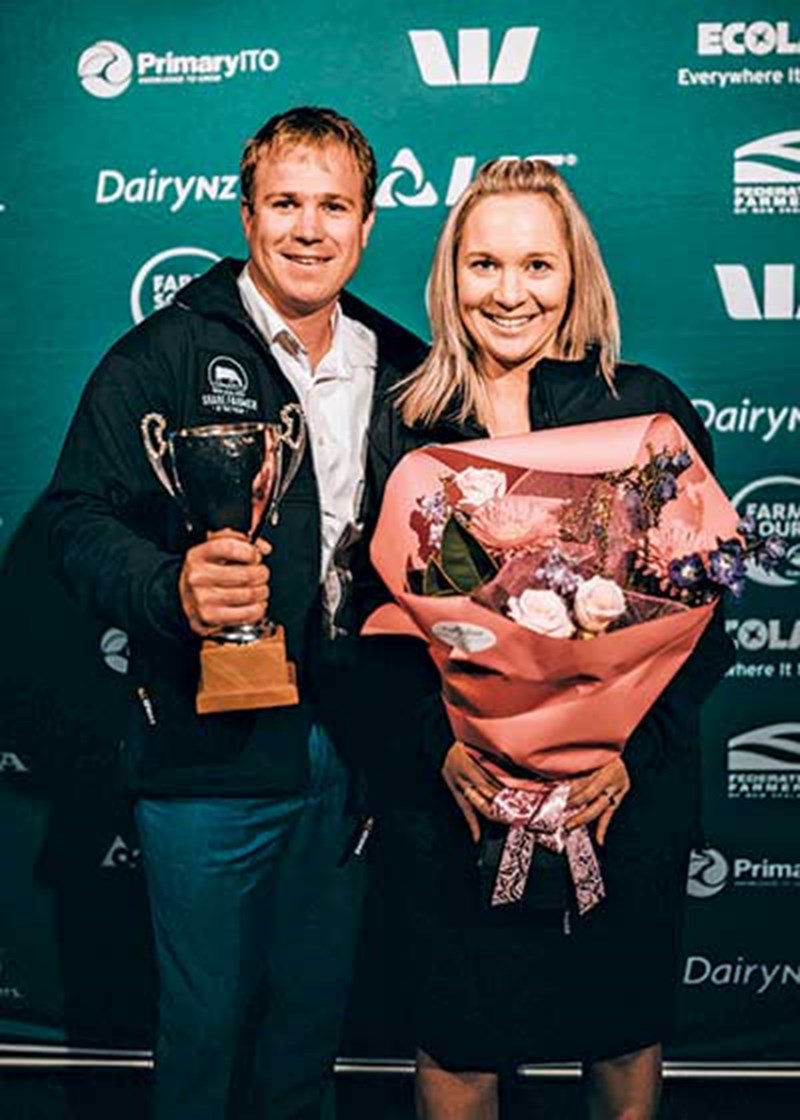 Ethan and Sarah (both aged 29) were named 2019 Auckland/Hauraki Share Farmers of the Year, and were runners-up in the same category in 2018.

The couple monitor their cashflow every two months, in line with their GST returns, and then do an in-depth six-monthly review in December.

“By December, we have a good feel for where we’re at, so we can review our budget to see if we need to tweak anything,” says Sarah. “As much as possible, we budget not to go into overdraft, so we plan what to do between the beginning of the year and the dry period and know what we need to put away.”

Each year, the couple repay additional lump sums of debt from surplus, so by monitoring, they know if they’re on track to meet that target.

Accounting for all scenarios

Alongside the formal budget are feed budgets, and the Kochs calculate what supplement they need to buy so they know what it’s costing them. They monitor throughout the year and sometimes make adjustments, depending on weather conditions.

“It dries out quickly here, so we allow for that, which is one of the reasons we start three-in-two milking around Christmas time. It makes it easier for me and works well for us with two preschoolers,” says Ethan.

The couple budget for dry-off and save for holidays. They also plan for capex, like buying or upgrading plant or machinery, which is funded when they have a surplus.

Sarah says they use the DairyNZ sensitivity analyses to look at the variability of cash surplus/deficit, particularly from a FWE point of view.

“It gives us a ‘what if’ picture and reduces the chance of unwelcome surprises.”

A wealth of data

The couple say becoming part of the DairyNZ Budget Case Studies project in 2017 has been a good way to benchmark their business.

“I think it’s really useful, particularly for sharemilkers like us, especially if you’re considering another job and you don’t have much data available. Case studies give you an idea of what others are doing and the merits of different systems," says Sarah.

“We’d encourage other farmers to check out the Budget Case Studies and resources available on the DairyNZ website and utilise them in their own businesses.”

Learn from the best

Back in 2015 when milk prices were low, DairyNZ recognised that some farmers remained profitable no matter what. So, we started collecting budgets from several top performers who were happy to share their numbers. Four years later, we have 15 case study farmers on board. If you want to see how these farmers are spending their money and get some ideas for making savings in your own business, head to dairynz.co.nz/budget-case-studies

For comprehensive information on all things budget-related, visit dairynz.co.nz/budgets

To learn about clarifying goals and strategies for you, your family and business, go to dairynz.co.nz/planning

Starting afresh or revisiting your business planning? Create your vision, assess your situation, set goals and actions; and plan your succession and governance.