Still in their early 30s, Carterton farmers Clarence and Elise Stolte are already a little less ‘hands on’ these days, thanks to their skills in improving staff capability. They say it’s all about applying and sharing knowledge with their people and being upfront about everyone’s strengths and weaknesses - including their own. 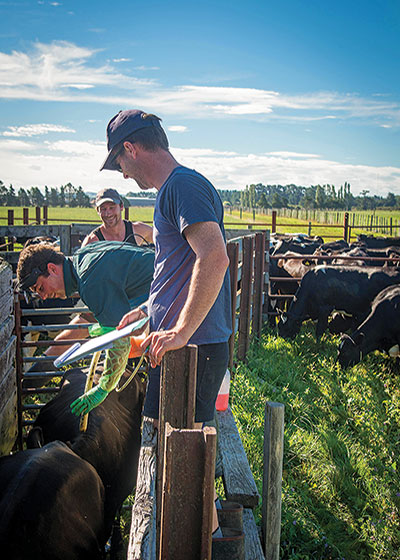 The Stoltes are in their third year of running two sharemilking operations in the Wairarapa as part of their farm sharemilking business, Stolte Ag. One operation is an equity partnership investment in the 165-hectare (ha), 500-cow family farm (originally owned by his parents Willem and Roelie Stolte). The other is a nearby 135ha property that's home to a 450-head herd sharemilked for NEER Enterprises. Applying and sharing their knowledge - and accepting the frailties that go with being a manager or an employee - have been key elements influencing how the Stoltes have grown their business and their people, while also achieving a better work-life balance for themselves and their staff.

In 2013, a part-time consulting role with Baker Ag was a catalyst for change. “At the time I had a very good second-incharge (2IC) staff member working with me who really deserved to move up to manager, so I gave him that opportunity and I could do the consulting work,” explains Clarence. The consultancy work also highlighted what he was doing right on the farms.

“It was a great way to see how other farmers approach their challenges, and to develop a level of professional skills too."

Three years later, the Stoltes moved on from the consultancy work, picking up a second sharemilking job instead. They built two tightly run operations with two full time staff on each, using seasonal staff during calving and mating periods.

‘Dashboard’ does the job

For Clarence and Elise, building a tight, committed team of staff isn’t just about how to keep the good ones - but also how as employers they can help them to fulfil their potential over time in their roles. “That means making sure they know what we mean when we say ‘good’ and that they have some input into how ‘good’ is achieved,” says Clarence.

At the heart of this are their monthly ‘dashboard team meetings’ that cover five key areas: tracking farm costs; identifying monthly focus areas; setting key performance indicator (KPI) measures relevant to the time of year; reviewing health and safety; and creating and updating a jobs list for repairs and maintenance. “As part of these meetings, it’s my responsibility to provide the right goals which will encourage each of my team’s self-discipline,” notes Clarence. 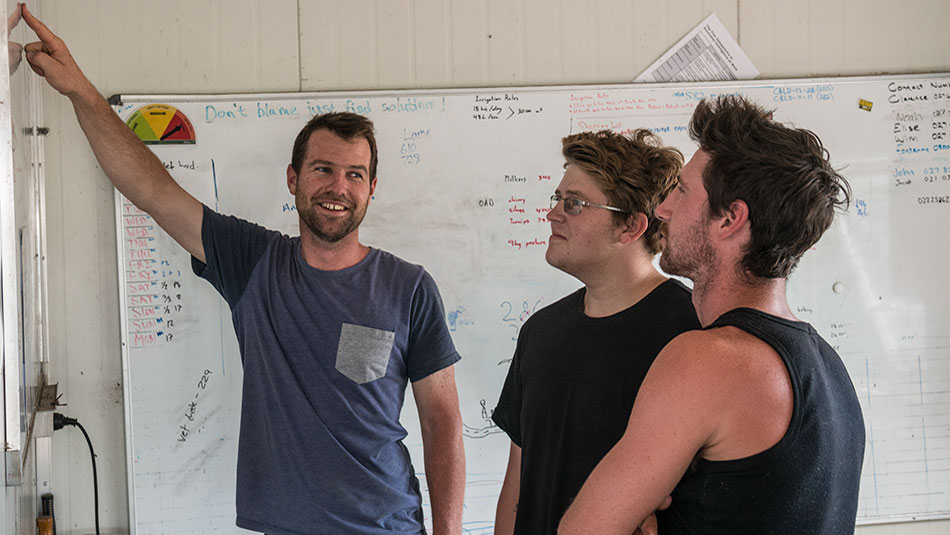 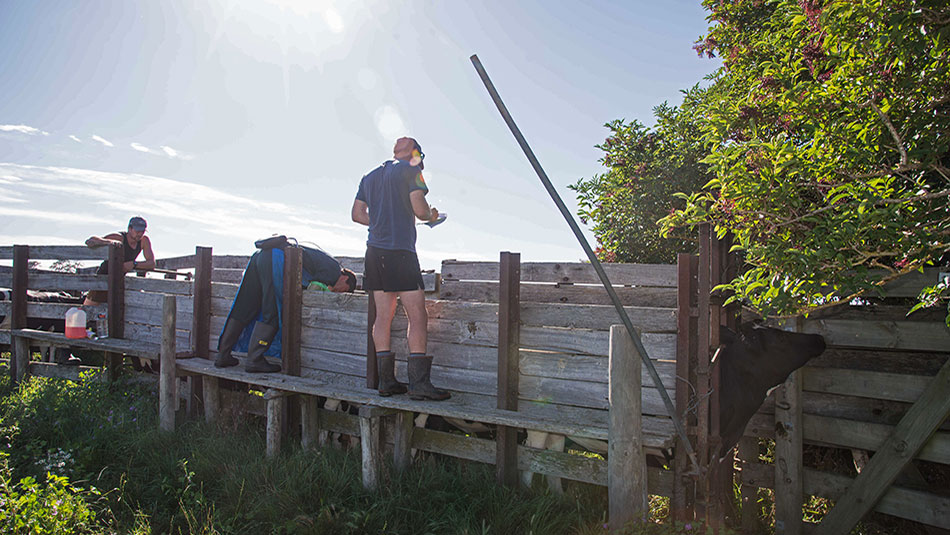 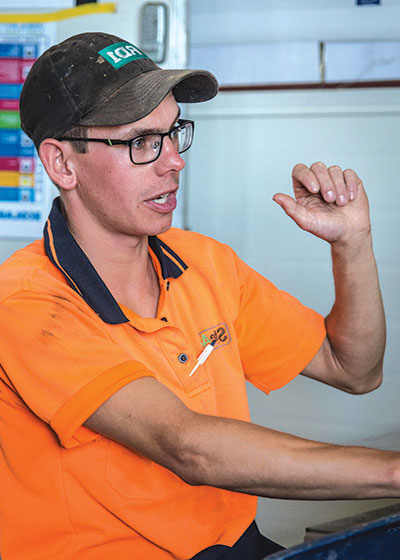 Riverslea Farm manager Derek de Jong says Clarence has helped him to learn how to listen and empathise with people.

Clarence gives his staff access and time to attend courses to lift their skills (for example, often including DairyNZ field days on calving preparation), and he’s hosted a Milksmart workshop and supports staff to achieve their Industry Training Organisation (ITO) level papers. “At the Milksmart workshop, we found we were already doing much of what was being discussed on hygiene and milk harvesting, so this was great for both our confidence and our staff members’ – we were on the right track.”

The DairyNZ HR Toolkit has also proven particularly useful in helping Clarence set up early employment policies. “In fact, it became a template for what we use today,” he says. “We also constantly refer to DairyNZ’s Facts and Figures book and our staff use its apps on their phones. I tell them that if they are excited by dairying then this is a great resource, so make the most of it as it’s well laid out online and very accessible. Plus we’ve taken part in DairyNZ’s progression groups and we encourage our staff to do that too. These groups take you out of the ‘cows and grass’ thinking and help you develop a pathway for your career.”

In providing a great workplace for his talented workforce, Clarence is also focused on environmental sustainability and the wellbeing of his animals. “These aspects are now at least as critical to dairy operations as any ability around grass and animal management. It’s not just about cows and grass, and how to get more out of both,” he says.

“Any animal welfare decisions are also fully discussed with the team before we do anything on the farm,” he says. “Just as we aim to treat each other with respect, we also apply the same philosophy to our animals, knowing good practice makes for happier, healthier and more productive cows.”

Clarence says surrendering some of his ego as a boss and acknowledging his own weaknesses as an employer really helps to improve both his own and his employees’ personal and professional strengths. “I know for me, my weakness is in attending to details. I’ve made a point of letting my staff know that, so they can feel confident about pointing that out when it comes up. That then gives them the confidence to know they can make mistakes and learn from them too. If they see me working on my weaknesses, they’re far more likely to work on their own. Sometimes we might also need a simple quiet conversation to point to what they need to work on and provide guidance going forward.”

Clarence is also careful not to over-correct staff when decisions are less than optimal. “There’s little to be gained in pushing the point when someone makes a mistake. Most people know, usually without even being told. It’s more constructive to talk about what might be done differently next time, so people don’t become gun-shy about making decisions.”

Meanwhile, Riverslea Farm manager Derek de Jong says one important skill he’s acquired working with Clarence has been the ability to listen and empathise with people. “This probably was not my biggest strength when I started over two years ago. But I have since seen how Clarence deals with people across a number of relationships, including with the farm owner.” Derek says farming will always involve working with a variety of people, and it's important to be able to see what they may be struggling with, and whether they themselves are aware of it. “You have to learn to have some patience with people.”

Derek has also found Clarence’s flexible approach to letting him get jobs done and managing his time day-to-day has enabled him to attend courses off the farm, like DairyNZ’s Milksmart workshops and the local farm discussion group. “We have also started talking about our future here and how we may be able to fit into the business as it grows. Clarence believes it’s possible to get the business to change and fit around the people he has.”

While some farmers may complain about staff issues, Clarence believes no modern farmer can succeed without developing their interpersonal skills to get the best out of good people. “We see it as a privilege, not a chore, to have people working on our farms supporting their families and living here. It’s up to us to provide a good workplace, one they look forward to working in. It’s a responsibility we feel we have to our staff, and as an obligation to the sector.” 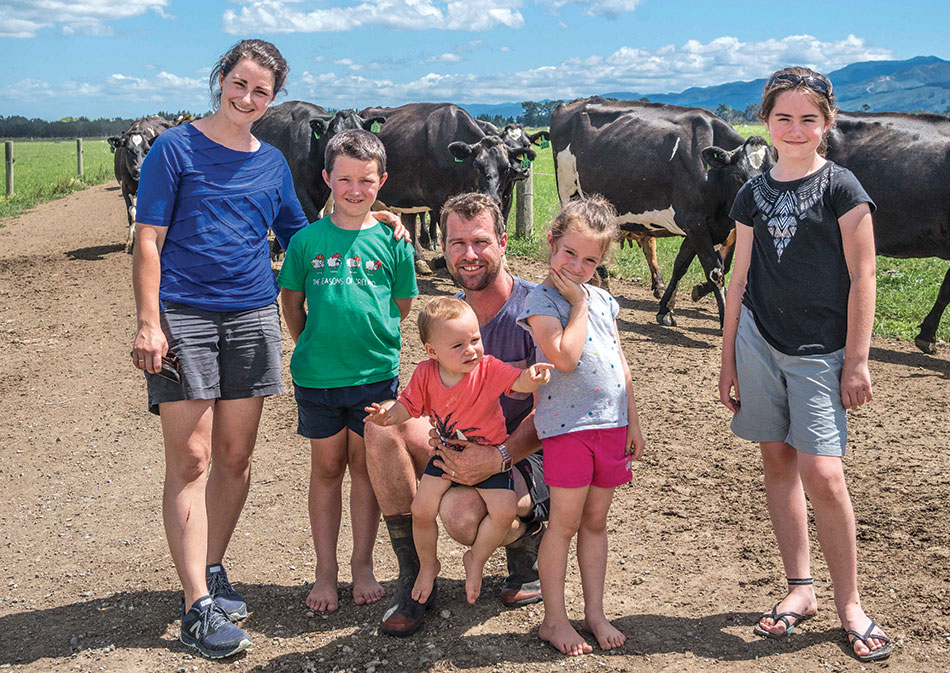 To get all the advice and guidance employers and employees need, including all of our latest tools and publications, visit the people section of our website.

This article was originally published in Inside Dairy April 2018 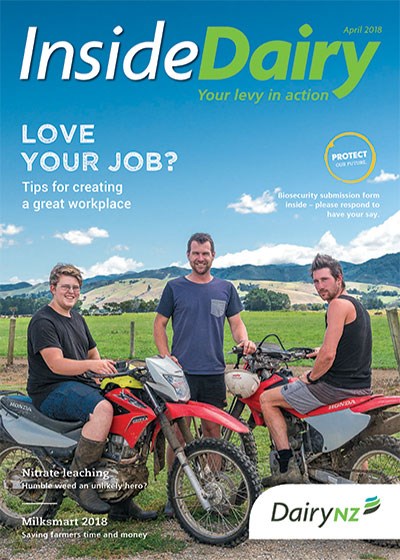