Solid progress is being made to eradicate Mycoplasma bovis (M. bovis), but finding and containing infected farms remains an urgent priority.

There’s no question that M. bovis has had a huge impact on our sector, particularly on some individuals and families. And although we’re far from out of the woods, latest data from the 10-year programme gives us confidence that we’re on track to eradicate the disease from New Zealand. 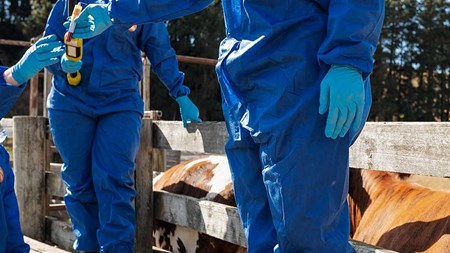 Infected herds are being identified and removed at a rate that’s consistent with earlier predictions. Also, processes have been improved and farmer feedback heard, resulting in quicker compensation payments, more farmer-focused processes and shorter turnaround times for farms under movement restrictions. Meanwhile, the number of properties confirmed with M. bovis to date is almost in line with what was estimated at the start of the phased eradication programme.

All of this is encouraging. However, identifying and restricting stock moving from infected farms, and preventing further spread of infection, remains a top priority. It’s critical that farmers keep accurate and up-to-date NAIT records, so at-risk animals can be identified quickly.

Improvements to the programme

Additional work is underway to identify any new cases of the disease. The ongoing national Bulk Tank Milk Surveillance programme, and the new National Beef Survey, will also help to give assurance in the future that the disease has been eradicated.

An important model in the eradication programme is what’s known as the Estimated Dissemination Rate (EDR). This is the number of farms that each newly infected farm will then go on to infect. To eradicate a disease, this number needs to be (on average) less than one.

The rate of infection between farms has been declining progressively since 2017 and the EDR for M. bovis is currently less than one, which gives us confidence that we can achieve eradication.

DairyNZ understands that M. bovis has been extremely challenging for some individuals and families, and we encourage affected farmers to seek support by calling our Farmer Information Service on 0800 4 DairyNZ (0800 4 324 7969).

This article was originally published in Inside Dairy April 2020

What you need to know about Mycoplasma bovis.

Contact details for DairyNZ regional offices, consulting officers, and our Farmer Information Service.
Thank you for submitting your opinion
Sorry, we could not process your request at this time. Please try again later.