Identifying an acceptable target for New Zealand methane gas reduction levels is a complex decision which requires balancing a variety of considerations. Changing conditions also mean any target needs to be reviewed regularly. 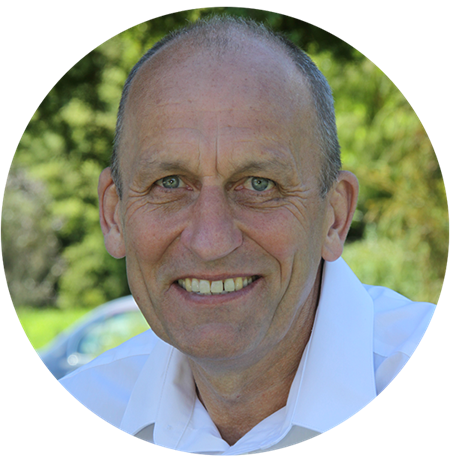 Methane (CH4) is a powerful short-lived greenhouse gas with a lifetime in the atmosphere of just over 12 years1. Since the 1700s, the concentration of CH4 in the atmosphere has risen from about 700 to 1850 parts per billion (ppb). Despite being present in the atmosphere at very low concentrations, CH4 exerts a strong influence on global temperature because it is highly effective at absorbing infrared radiation. Most of the warming from CH4 occurs within 50 years of its emission; however, some lingers beyond 100 years. Current estimates are that global anthropogenic CH4 emissions have contributed about 40 percent (~40%) of the total warming the world has experienced since the industrial revolution2. 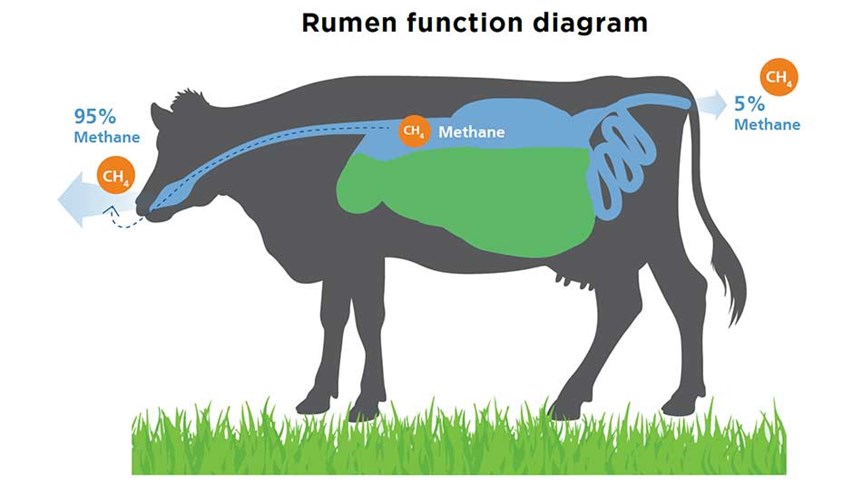 Estimates of the CH4 currently produced globally by livestock are in the range of 90 to 120 million tonnes CH4 per annum4,5,6. This is 30 percent of total anthropogenic CH4 emissions. Livestock have been responsible for around 14 percent of the warming experienced by the Earth since the Nineteenth Century7. Enteric CH4 emissions, those arising from the digestion of feed, comprise approximately 90 per cent of all livestock-derived emissions, with cattle (77 percent) being the dominant source globally4.

Worldwide by 2030, CH4 emissions are forecast to be 12 percent above current emissions6. 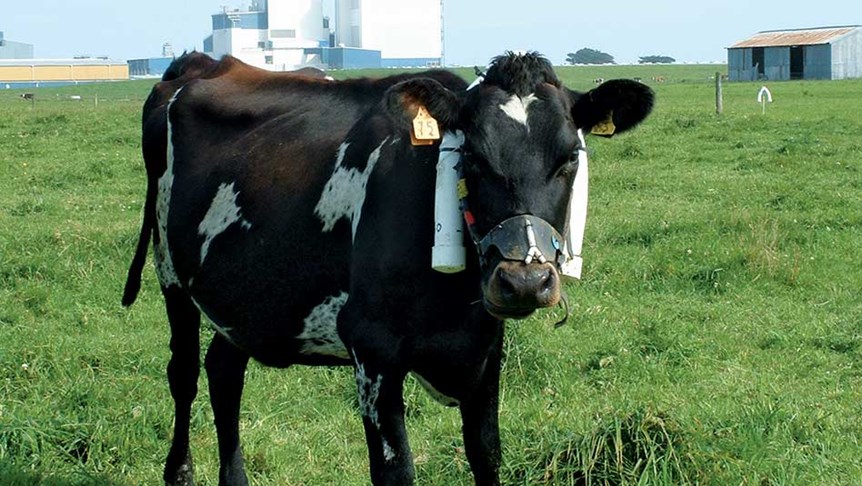 Breakdown in the atmosphere

Methane has a short life in the atmosphere, principally because of chemical reactions with hydroxyl radicles (OH) in the troposphere (between the Earth’s surface and the stratosphere). These reactions break down CH4 into water (H2O) and carbon dioxide (CO2)2. Given that enteric CH4 arising from the digestion of plant material removes CO2 from the atmosphere by photosynthesis, it is easy to think it's simply a case of CO2 in and CO2 out, and hence completely neutral with respect to global warming. 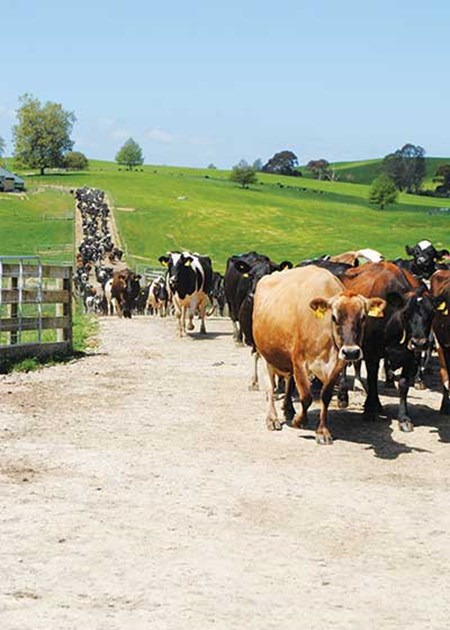 Methane is emitted continuously from the cow's mouth as part of its natural digestive process.

This is incorrect, because for a short time some of the CO2 removed from the atmosphere by photosynthesis is present in the atmosphere as CH4. This absorbs more infrared radiation than the CO2 from which it was originally derived (see reference source9 for a more detailed discussion).

How does methane compare with other greenhouse gases?

The three main anthropogenic greenhouse gases (GHG) are CO2, CH4 and nitrous oxide (N2O). These differ in their longevity in the atmosphere and in their absorption of infrared radiation. International treaties designed to encourage the reduction of anthropogenic GHG, for example the United Framework Convention on Climate Change (UNFCCC), refer to GHG collectively. This raises the question: how should individual GHG be compared with each other?

To answer this question, scientists have devised systems that allow all GHG to be expressed using common units. The most common of these systems is called Global Warming Potentials (GWP) in which CO2 is given a value of one and other gases are compared with CO2 based on their longevity in the atmosphere and their ability to absorb infrared radiation10.

In international reporting to the UNFCCC, GHG are compared over a 100-year timeframe: CH4 currently has a value of 25 and N2O a value of 298. Using these values, GHG can be reported in a common currency known as carbon dioxide equivalents (CO2-e). Figure 1 explains graphically how CH4 warms the atmosphere relative to CO2. Basically, one tonne of CH4 creates the same average warming as 25 tonnes of CO2 over a 100-year period (i.e. the area under the curves are equal).

Figure 1 also shows that the GWP gives a good representation of the average warming over a given period of time relative to CO2. However, it hides the fact that the time course of warming caused by CH4 is very different to that of CO2. Methane has a short life in the atmosphere and a much higher level of warming initially, but one that disappears relatively quickly. Carbon dioxide has less of an immediate impact but, because it decays much more slowly, the warming continues at a similar level for hundreds of years.

GWPs are the most commonly used method for comparing different GHG but they’re not the only method. GWPs have also been criticised as being an inappropriate metric when considering how CH4 should be treated relative to CO2 under ambitious GHG mitigation, and when considering the impact of cumulative emissions year-on-year11. 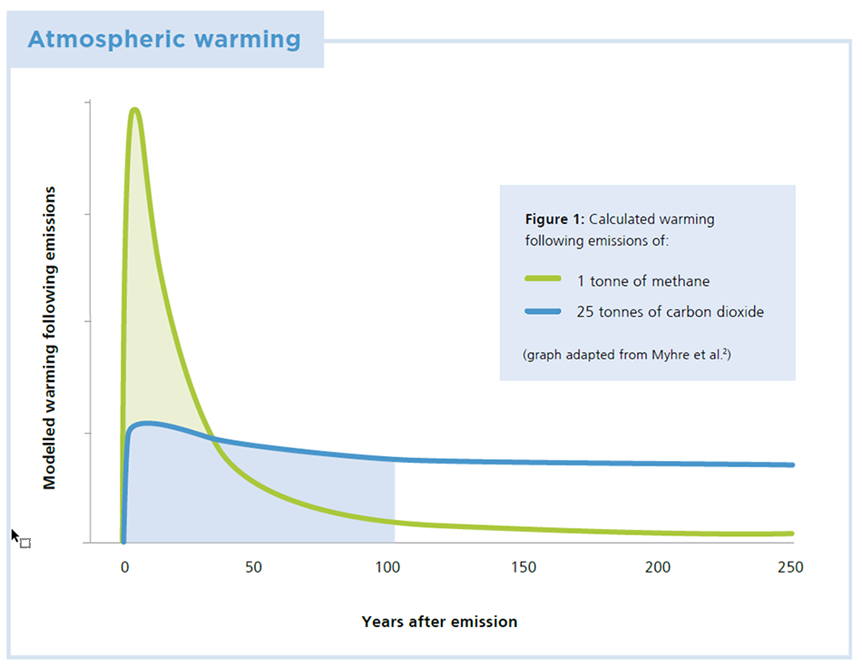 Does New Zealand have a specific methane reduction target?

Under the 2015 Paris Agreement, 196 countries pledged to reduce GHG emissions with an aim of restricting global temperature rise to well below two degrees Celsius (2oC) and pursue efforts to keep the warming as low as 1.5oC. Parties to the Paris Agreement have submitted plans for reducing emissions up to the year 2030 – so-called Nationally Determined Contributions (NDC). New Zealand in its NDC has committed to reducing CO2-e GHG emissions to 30 percent below 2005 levels by 2030.

Parties to the agreement are expected to strengthen their reduction commitment over time. New Zealand has not set a specific target for individual gases within its emissions reductions. However, since CH4 from agriculture comprises more than 40 percent of all CO2-e emissions, there is likely to be pressure on the livestock sector to reduce CH4 emissions. In the longer term, the current government is working on a Zero Carbon Bill. In its consultation phase, that bill outlined options that could result in differential targets for the three principal GHGs out to 2050.

These options included a target to reduce CO2 to ‘net zero’ by 2050 (emissions minus removals of CO2 stored in things like trees). They also included a reduction in all gases to net zero (using the same approach) by 2050, and a differential treatment of the short-lived gas (CH4) and the long-lived gases (CO2 and N2O). This latter option calls for ‘stabilising’ CH4 at some level, with the other gases reduced to net zero.

Why should methane be treated differently to carbon dioxide and nitrous oxide?

The 2018 report7, commissioned by the Parliamentary Commissioner for the Environment (PCE), lays out in detail the scientific basis for treating CH4 differently to CO2 when it comes to GHG mitigation. The following brief summary draws on this report.

As methane lives for only a short time in the atmosphere, stabilising or reducing emissions below their current levels would see the concentration in the atmosphere level off within a few decades. This in turn means that, eventually, no additional warming will occur in excess of that caused already by existing emissions, but this levelling off in warming will take some time.

Figure 1 shows that although CH4 lasts for around 12 years in the atmosphere, the warming from an individual emission pulse continues for more than 100 years after the gas has disappeared from the atmosphere. So stabilising emissions at current levels still results in increased warming for several centuries (albeit at a declining rate).

The different behaviour of CO2 and CH4 in the atmosphere leads to two very clear conclusions. First, for the world to stay within the below-2oC temperature limit, CO2 emissions need to be reduced to zero as quickly as possible. Second, CH4 emissions don’t have to be reduced to zero but the less CH4 is emitted, the less the Earth will warm overall. The more CH4 is reduced below current levels, the more feasible it is for the world stay well below the 2oC limit (see Figure 1).

So is there an unambiguous methane reduction target for New Zealand?

Setting national targets for GHG reduction has to consider more than science. Science tells us that to meet the Paris Agreement temperature limit of well below 2oC, CH4 does not have to go to zero. However, the lower future emissions go, the less New Zealand will contribute to climate change. Science alone doesn’t tell us what a national reduction target should be, or the rate at which the target should be reached. Setting targets involves far wider consideration of social, economic, environmental and equity issues (both within New Zealand and between New Zealand and the rest of the world). These involve judgements and trade-offs that science can only partially inform. 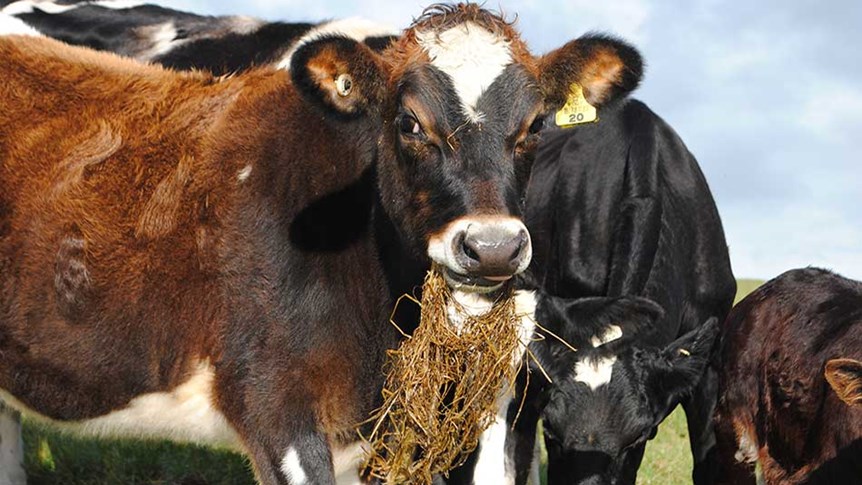 The amount of food a cow eats is the biggest determinant of how much methane it produces.

The recent PCE report9 estimated that if New Zealand reduced its CH4 emissions by 10 to 22 percent below 2016 levels by 2050 (the range reflects differing assumptions around atmospheric feedback processes and emissions from other countries), then our CH4 emissions would contribute no further to global warming than they already are. This implies that if emissions could be reduced by more than 10 to 22 percent below 2016 levels, we would contribute to ‘cooling’ the planet, relative to the warming caused up to 2016.*

Choosing ‘not adding any further to warming’ as the benchmark by which to set a methane reduction target makes the tacit assumption that the warming caused to date is the acceptable level for New Zealand (i.e. that we have some sort of property right to the warming we have already caused) and that not causing any more warming fulfils our contribution to meeting the goals of the Paris Agreement. This is certainly not an issue that can be decided by science. 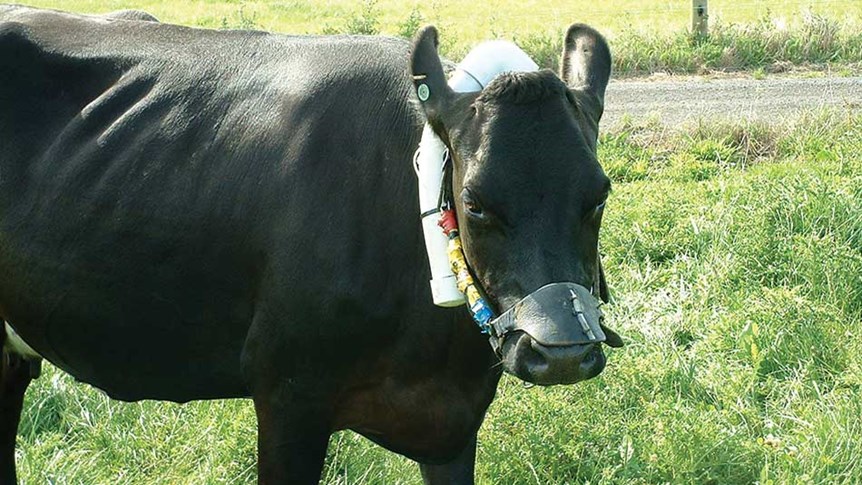 The type and quality of what a cow eats influences how much methane is produced.

New Zealand’s commitment under the Kyoto Protocol was not to increase GHG emissions above 1990 levels on average over the 2008 to 2012 period. For 2013 to 2020, New Zealand voluntarily agreed to reduce emissions to five percent below 1990 levels. Under the Paris Agreement, the emissions reduction target is 30 percent below 2005 levels. Science can inform the consequences of using a particular reference year but it doesn’t tell us the appropriate reference year to choose. So, science can’t provide a definitive CH4 reduction target for New Zealand. However, science can help ensure that any target takes into account CH4's short-lived life in our atmosphere, alongside social, economic, environmental and equity issues. Any methane target needs to be regularly reviewed to ensure it takes account of changing circumstances.

* ‘Cooling’ here refers to causing less warming than that caused relative to a reference point, e.g. a particular reference year. All emissions of methane will cause the earth to be warmer than if they had not been emitted. With a shortlived gas like methane, reductions in emissions against a fixed reference point can result in the absolute contribution to warming going down, compared with that reference point. Current methane emissions still warm the atmosphere, but not as much as previous emissions did. This is not the case for a long-lived gas like carbon dioxide. 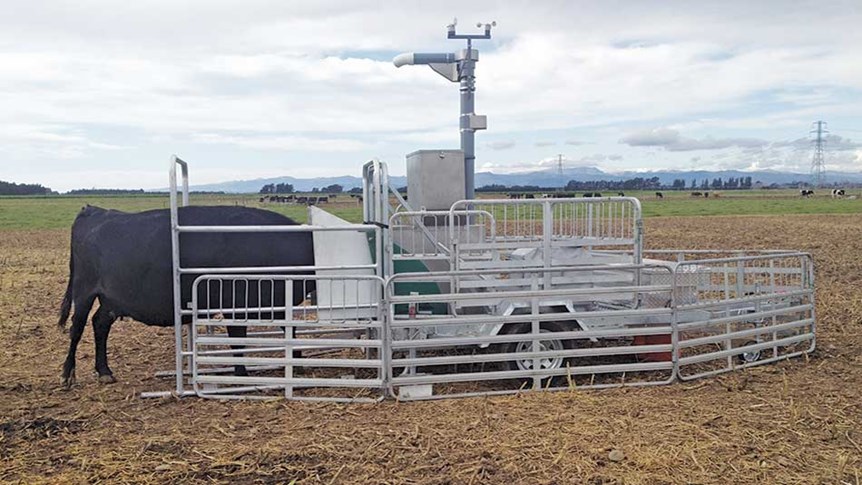 This article was originally published in Technical Series December 2018 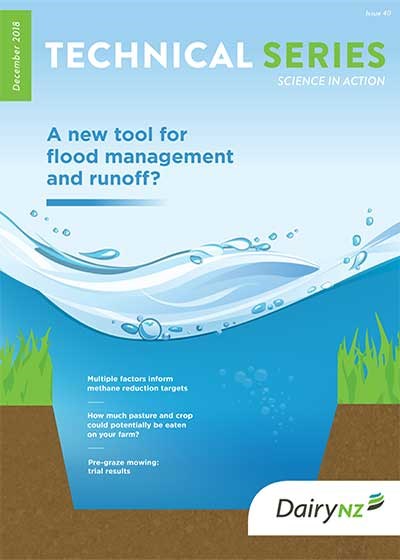