Why do we have a genetic evaluation system?

The New Zealand genetic evaluation system for dairy cattle provides estimations of an animal’s genetic merit across a wide range of production and fitness traits. This enables NZAEL to generate the selection index Breeding Worth (BW). BW gives bull breeders and dairy farmers a tool for identifying bulls and cows with the greatest genetic potential for improving future farm profits.

The value of genetic improvement accumulates over time, and it’s estimated that genetic selection has generated over $3 billion in additional profits for New Zealand dairy farmers over the past 10 years. Further increasing the rate of genetic gain across the national herd will deliver larger profit gains for farmers. 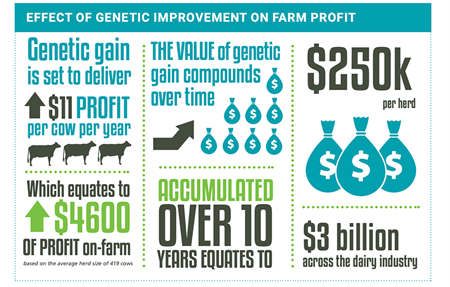 How does it work?

A cow’s performance is determined by a combination of her genetic merit and her environment. The genetic evaluation system separates these two factors. The model is often expressed in the form of an equation. Typically, and in its simplest form:

The model is called a mixed model because it’s a mix of fixed and random factors affecting the phenotype. Fixed factors affect different cows, or groups of cows, in the same way, e.g. breed. Random factors are different for every cow. For example, the parts of the animal’s genotype that are unique to that animal and its relatives.

To isolate the temporary effect of the environment, e.g. feeding levels, the model uses information about the herd itself and the average performance of herd mates.

The underlying assumption is that cows of the same age, and at the same location, are exposed to the same environment. In short, we take the average of that group of animals as a baseline, adjusting for additional fixed effects like date of birth and stage of lactation when tested.

A cow’s performance above or below that baseline is assumed to be the result of both genetic and permanent non-genetic effects (environmental factors, such as a difficult birth or disease at a young age) that affect the animal for its life and are not controlled by its genetics. We rely on large numbers of daughters per bull to ensure that the permanent environmental effects are appropriately separated from genetic effects.

Research has established how much G and E vary for any trait and, importantly, how similar G is for related animals. So, even though bulls don’t produce milk, we can determine the effect of their G for milk yield from a knowledge of how much their female relatives produce (typically, daughters). Animals are also grouped based on their demographics to form genetic groups, which allows breeding values to be inferred for animals with no known pedigree, based on the group they have the most in common with.

The technical challenge in deciding on the mixed model for each trait is to find a model that accounts for the most variation in the phenotype, while still being readily solvable using current computers. The size of the task has increased by orders of magnitude with the availability of genomics, where detailed information on the DNA of an animal is used. Fortunately, computer technology has improved such that increasingly complex models have become viable.

How can it be improved?

This research effort has identified a number of enhancements that will improve the performance of the New Zealand animal evaluation system, including optimised evaluation models, improved computer systems and methods for including genomic data in national evaluations.

What improvements have been made?

In February 2020, several enhancements were implemented within the national genetic evaluation system, including replacing outdated 2006 software. NZAEL, a wholly owned subsidiary of DairyNZ Inc., has been responsible for operating the animal evaluation system for the New Zealand dairy sector since 2017, when the latest version of animal evaluation software was transferred from LIC to NZAEL. A substantial upgrade, including the latest advancements in technology and industry knowledge, has created a second version, NZAEL 2.0.

1. Accounting for inbreeding as a factor responsible for non-additive genetic effects
Inbreeding is present in animals whose sire and dam are related through common ancestors. The more common ancestors there are, and the closer they are in the pedigree, the greater the level of inbreeding. It is well known that inbreeding has a depressing effect on many traits. Accounting for inbreeding in the model improves the separation of additive and non-additive genetic effects, resulting in more accurate breeding values.

3. Drastically reducing the number of genetic groups
Genetic groups are formed so that animals with unknown ancestors can be more fairly compared. This is particularly important in New Zealand, where the unknown ancestors can be from different breeds, e.g. Friesian or Jersey. Genetic groups are a vital component of the genetic evaluation system, but they can be difficult to implement. Animals must be assigned to the correct genetic groups while ensuring each group contains enough animals to yield sensible solutions. The old system’s grouping method had become very complex, whereas NZAEL 2.0 simplifies the grouping of animals. This optimises equations and better targets the number of genetic groups. This improvement will likely contribute to greater stability in BVs over time. These model improvements are also incorporated in LIC’s Single Step Animal Model (SSAM), which will be fitting identical models (with the addition of genomic information). 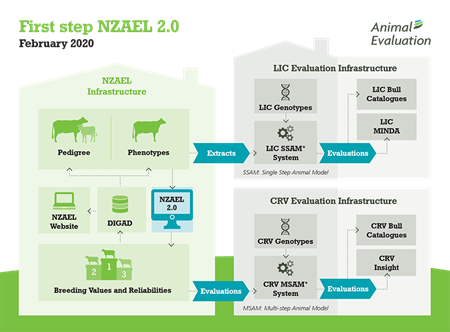 At the core of a genetic evaluation system are computer programs which fit the mixed models by forming and solving the model equations. In other words, the programs work with what we know, (performance and pedigree information, variances, and the mixed model equation) to predict the additive genetic merit of every animal.

For example, milk fat BVs are produced using performance information from herd-tested cows, which is extended across the rest of the animals in the pedigree, based on recorded relationships.

Every animal in the pedigree increases the size of the mixed model equation. The current pedigree file has 30 million animals, and so solving these equations is a large computational task. The complexity of this task increases with every new animal that is included, and the national herd has grown by approximately 25 percent since the NZAEL 1.0 software was developed.

NZAEL 2.0 uses state-of-the-art computing software, which incorporates the last 13 years’ worth of technological advances. These improvements enable the hugely complex system of equations to be solved quickly and reliably. The new software is much faster, with evaluations completing in less than 15 hours, roughly a quarter of the time taken by the NZAEL 1.0 software.

Over the years, several adjustments have been applied to the evaluations to increase their accuracy. These included the reproof adjustment, the parent average adjustment and the heterogeneous variance adjustment.

A reproof adjustment introduced to counteract a systematic drop in the BV of progeny-tested sires as they attain daughters in the wider national herd (the reproof effect) has now been removed, as it’s no longer needed by the improved model.

The parent average adjustment addresses a systematic drop in the BV of young sires gaining their first daughter proof (progeny test proof). It’s likely that the parent averages of animal evaluation (AE) enrolled sires are overestimated, due to suboptimal partitioning of additive and non-additive genetic effects, and permanent environmental effects in their highly selected elite mothers. This adjustment is still required, and the factors applied to reduce the parent average breeding values for AE-enrolled sires have been updated. 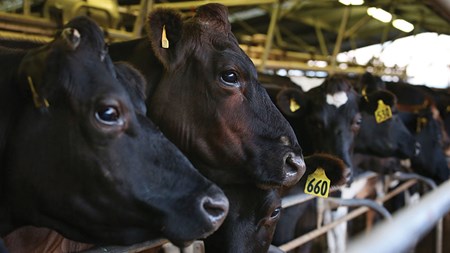 Improving the genetic evaluation systems will help bull breeders and dairy farmers to increase the genetic merit of their herds and, ultimately, improve profits.

The heterogeneous variance adjustment was originally designed to adjust the performance of herds of cows to a common variance, to give more accurate evaluations. The new system no longer needs this adjustment.

New standards for the pedigree and performance data used in genetic evaluations have been introduced for all trait sets. This standardisation extends to the data used by LIC in their SSAM evaluation system. NZAEL 2.0 and LIC’s SSAM will use the same phenotypes and pedigree data for all traits. These standards will be most beneficial as we work towards NZAEL 3.0, which will be an independent national genetic evaluation system incorporating genomic data. It’s due to be introduced in February 2021.

What improvements are still to come?

The February 2020 upgrade, the first of two stages, coincided with a similar upgrade to the LIC genomic evaluation system. The model equations and computing systems are now aligned across LIC and NZAEL. However, LIC evaluations benefit from the inclusion of genomic information. NZAEL will make use of genomic information to improve the accuracy of BW in the second stage of this upgrade, planned for February 2021.

The ongoing development of these systems will enable bull breeders and dairy farmers to increase the genetic merit of their herds and ultimately, improve their profits.

Find out more about this research, NZAEL and interpreting BVs at dairynz.co.nz/animalevaluation

This article was originally published in Technical Series April 2020 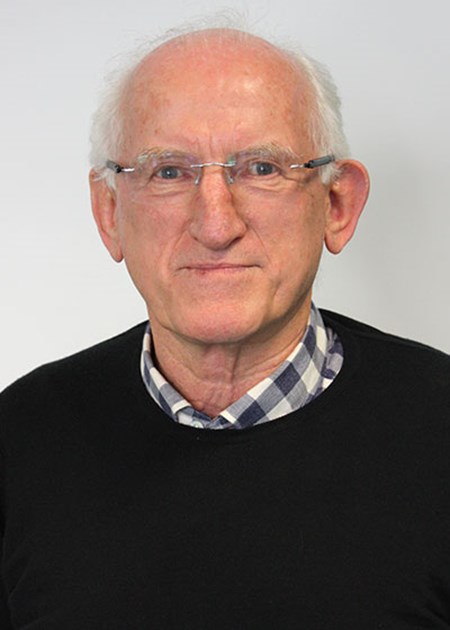 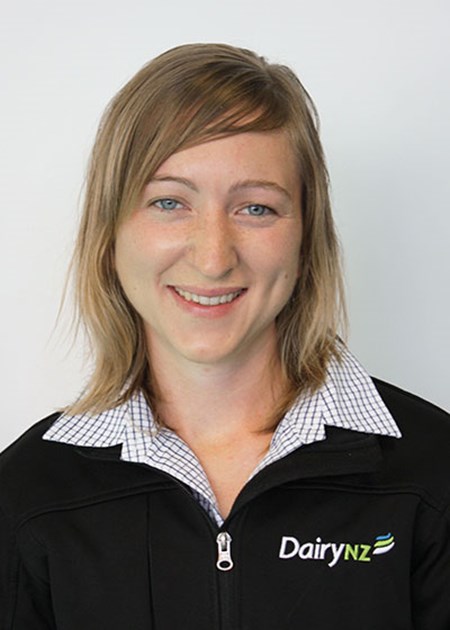