Saving for a rainless day

Saving for a rainless day 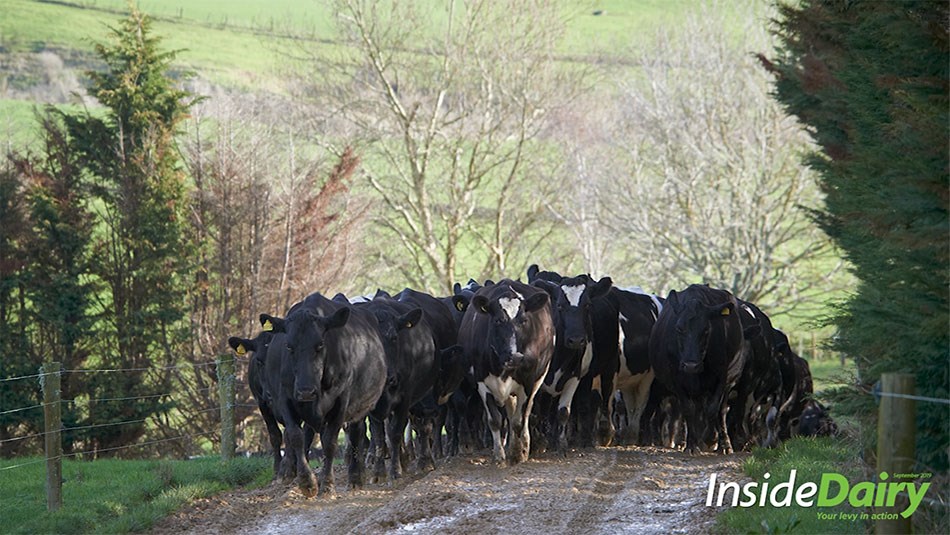 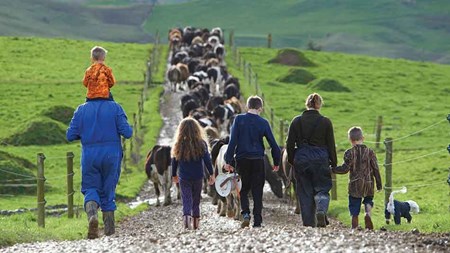 Waikato sharemilkers Martin and Hazel Kelly with their family.

Martin and Hazel Kelly aren’t ones to shy away from a challenge. After struggling with difficult pastures in the first months of a new job, they decided it was time for a change in approach.

“We mulled over what we could do to combat management problems with our predominantly clover pastures, and decided to try deferred grazing as a strategy,” says Martin.

“Using deferred grazing on about 10 percent of the flat paddocks has helped us to maintain pasture quality over the entire farm. It also allows time for the pasture to reseed and build root reserves before autumn grazing begins.” 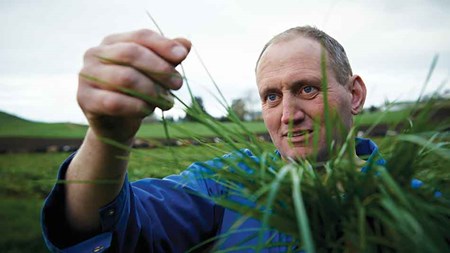 "Using deferred grazing on about 10 percent of the flat paddocks has helped us to maintain pasture quality over the entire farm."

The Kellys sharemilk on Michael and Katrina Cumpston’s farm at Maihiihi, east of Otorohanga. The land has been through several incarnations: it was a dairy farm for 27 years, then a drystock and maize cropping block for six years, then reverted to dairying in 2013.

Pastures on the farm vary. There are 50-year-old ryegrass cultivars on the hills and clover/ryegrass on flats that, in the past, were cropped in maize. Many years of maize cropping have created pans in the soil, which has caused problems with pasture persistence, says Martin. 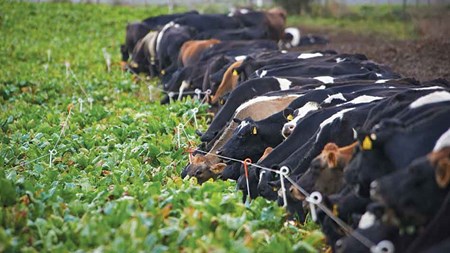 A combination of growing and feeding crops (like fodder beet, shown here) and good pasture management helps the Kellys extend their production season.

“We like a challenge, and we’ve been working to improve our soils by breaking up the pans. That’s one of the reasons we chose fodder beet as a crop because its tap roots are deep, and when they rot in the ground and the worms move through, it helps to improve the soil structure. We’re also re-grassing using Raider, a late-heading ryegrass known for its superior persistence.”

Over the fence in Ireland

Hazel was brought up on a sheep, beef and deer farm near Taumarunui, King Country. In 2002, she was working on a dairy farm in Cork, Ireland, when she met local co-worker Martin. They married in New Zealand a year later, went back to Ireland in 2004 and returned to New Zealand in 2010 with two extra passengers, son Nelson (12) and daughter Erin (9). Two more sons, Killian (5) and Seamus (3), were born in New Zealand.

Martin and Hazel began their New Zealand dairying careers as farm assistants on a high-input farm in Maihiihi. Hazel says this was a steep learning curve that helped them to improve their knowledge of Kiwi dairy farm systems. Martin also did a Primary ITO course to get to grips with the local style of dairy farming, different to what he was used to. 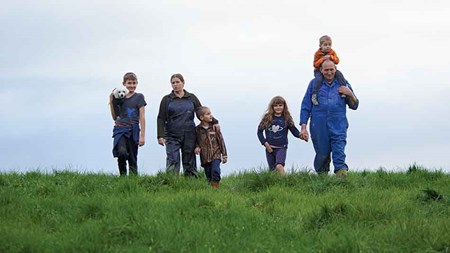 “When it’s raining in Ireland, we put the cows inside, and they’re indoors for seven to eight months of the year. We lift fodder beet instead of grazing it and, generally speaking, you don’t have to worry about heatwaves either,” he says with a grin.

This is the Kelly’s fifth season on the property. They’d moved up the ranks on various farms in the district before starting their present job as variable order sharemilkers in 2014.

“It’s a great community with lots of friendly people,” says Hazel. “We love Maihiihi and the lifestyle. It’s great for our four children and we’d be reluctant to leave the area.” 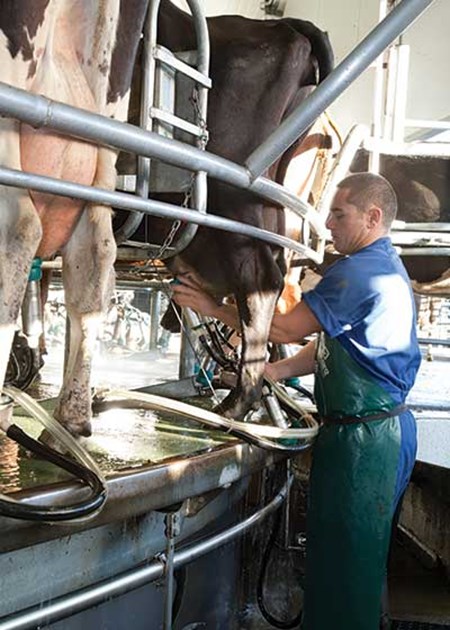 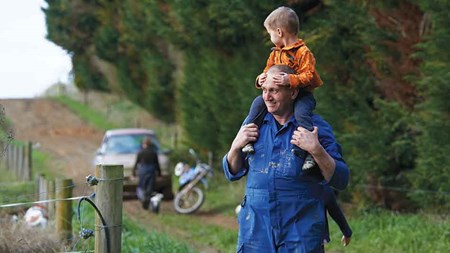 The Kellys are flexible in their approach to paddock selection for deferred grazing, but usually shut up paddocks on the flats when the grass is growing strongly, generally in October and November, and use it for feed in December and January. 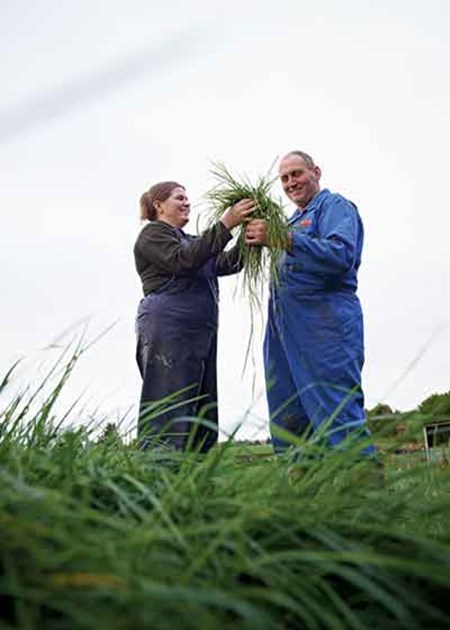 "I think we have more pasture than some other farms in the area because we're not hammering the paddocks so hard when it's dry."

Their choice of paddocks depends on seasonal conditions. They use deferred grazing to control the clover to ryegrass ratio to reduce the risk of bloat, which has been a problem for them in the past.

“When clover growth is too high and we’re waiting for the ryegrass to catch up, we shut the paddocks either for deferred grazing or for silage” says Hazel. “If there’s 80 percent clover and 20 percent ryegrass, we stop that paddock until the ryegrass has an opportunity to catch up. Timing is not hard and fast; it really depends on the weather.”

Last summer, when it was dry, the couple took two approaches to grazing. They either cut the night before, then put the cows in briefly the next morning so they each got three to four kilograms of dry matter (kg DM); or they fed the paddocks like a crop, using electric fencing to strip-graze them.

“Both these seem to work well,” says Martin. “But we don’t send them in hungry – they’ll have eaten somewhere else, or will have had baleage before they go on, so they’re getting a balanced diet. They generally spend two hours on a deferred grazing paddock to get a top-up before milking. The cows aren’t in the deferred grazing paddock for too long, so we leave quite high residuals of between 1500 and 1700kg DM/hectare.

Martin and Hazel also plant 3.2 hectares of fodder beet in October, a hectare of swedes in December and make 160 ‘large squares’ of silage. 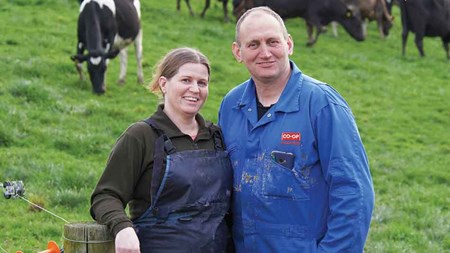 The Kellys like well-fed, contented cows. They believe that topping up their diets using deferred grazing helps to boost milk production.

“We don’t like skinny cows, so we use it (deferred grazing) for health reasons too. If cows get anywhere near body condition score (BCS) 4, we’d be worried, so we try to keep animals at around BCS 4.5,” says Martin.

Hazel says the way they manage pasture also has a positive impact on the bottom line.

“I think we have more pasture than some other farms in the area because we’re not hammering the paddocks so hard when it’s dry. This helps us to reduce costs because we need less brought-in supplement, and this season we milked until early June. Of course, using crop as well helps us to extend the production season.” 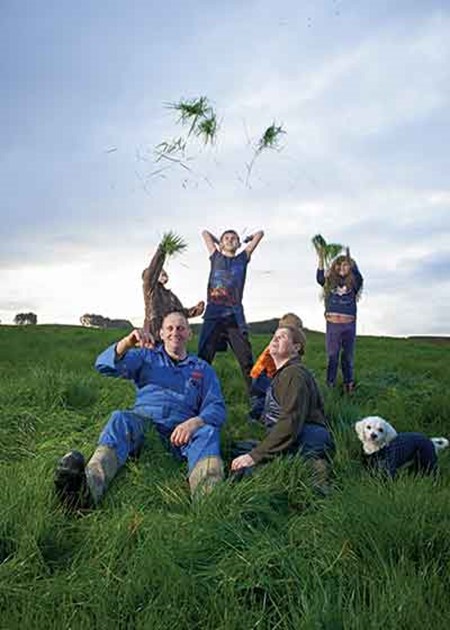 This is the Kelly’s fifth season on the property in Maihiihi – and they're loving it.

Seedfall depends on when the paddocks were closed up, says Hazel.

“It was quite clover-driven for the first round, but after the second grazing or cutting, we noticed the ryegrass tillers improved, but that also depends on rainfall.

“We’re quite careful with the new seedlings and keep an eye on them. We try not to send the cows in too early, to give the seedlings a chance to develop to a sufficient level. We might cut and wilt and let the cows in, but not for long. On the second grazing it’s even better, so we’re more likely to cut and wilt then.”

Martin and Hazel say that for them, deferred grazing has worked well.

"It's a cost-effective way of maintaining pasture quality on the rest of the farm and keeping the stock healthy. Transferring some feed into the dry period at little cost and having some seedfall are other benefits,” says Martin.

Read our lead stories on cropping and pasture renewal in other regions – check out the Lower North Island and South Island editions of Inside Dairy September 2019.

Management information to help you maintain high quality pastures during a feed surplus.

What is deferred grazing?

Deferred grazing is the practice of holding over pasture that’s surplus to animal requirements in spring. It is then grazed at a later date, usually in the summer or autumn, when there is a shortage of pasture.

Find out more about the pros and cons of deferred grazing at dairynz.co.nz/surplus 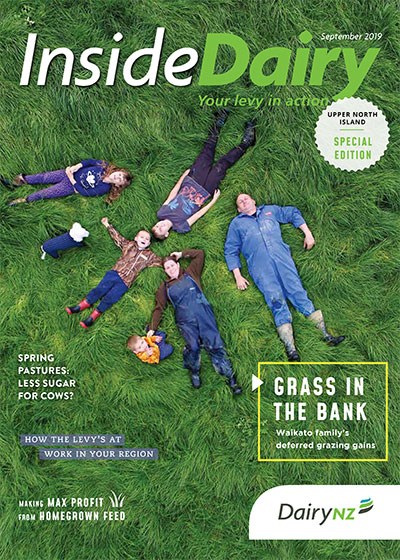 Want some tips for pasture renewal and cropping in your region? Check out our Upper North Island special edition of Inside Dairy September.