Setting a new course for NZ

Setting a new course for NZ

A plan is being formed to make our country’s biosecurity system stronger than ever. At its heart is a campaign to show every New Zealander, including dairy farmers, that we all have a role to play.

Right now it’s hard to ignore biosecurity. Where once it may have seemed irrelevant or something to think about later, the arrival of Mycoplasma bovis has dramatically highlighted the need for farmers to protect themselves and actively pursue good biosecurity.

Nick Maling, interim chair of the Biosecurity 2025 Steering Group, says it can be easy to think biosecurity is just something the government does.

“In fact, the importance and the enormity of the biosecurity task means it’s vital for every New Zealander to pitch in. After all, everyone benefits from a strong, resilient biosecurity system, especially those who make their living on the land.”

The government and a range of partners across primary industries, businesses, communities, iwi and hapū are currently working on a plan to make our biosecurity system stronger and more future-focused. It’s the realisation of what was set out in the Biosecurity 2025 Direction Statement released at the end of 2016, which guides the biosecurity system through to 2025 and beyond.

With so much riding on dairying, both in terms of the national economy and the health and wealth of individual businesses and communities, it’s vital that dairy interests are represented in the forward planning.

Biosecurity 2025 has had broad buy-in to date, with around 80 biosecurity system leaders and 60 organisations, including DairyNZ, taking part in working groups to drive the design. A steering group, which includes Kimberly Crewther from Dairy Companies Association of New Zealand (DCANZ), is helping keep the work on track. The plan outlining how this will happen is set to be launched at the Biosecurity New Zealand Forum in November.

The programme will build strength in the system by harnessing science and technology; tapping into data and intelligence; building effective leadership in biosecurity; developing our future workforce and infrastructure; and, what will be most visible in the coming months, ‘Building a team of 4.7 million’ – engaging all New Zealanders in biosecurity.

Research found that although 96 percent of New Zealanders think biosecurity is important, only two percent believe there’s a personal consequence to them if a biosecurity breach occurs.

A new independent biosecurity brand, ‘Ko Tā-tou This Is Us’, has been launched to highlight that biosecurity affects every New Zealander, that it protects everything we hold dear – our outdoor environment, our farm businesses, even the food we enjoy.

A public campaign is now underway, with television, cinema and print advertising, and a new website – thisisus.nz

“We want to show all New Zealanders, including those in the dairy industry, that they are an essential part of strengthening our biosecurity system and every small action towards better biosecurity practices is important,” says Nick. 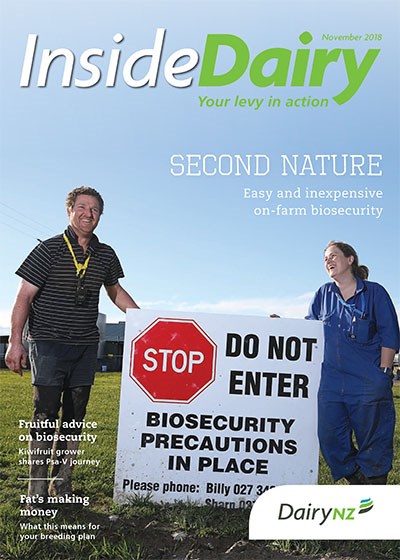