DairyNZ’s scientific research is delivering real on-farm solutions for dairy farmers. Inside Dairy caught up with one farmer who’s contributing to a major study, and another who’s made a significant milking change based on our research results. 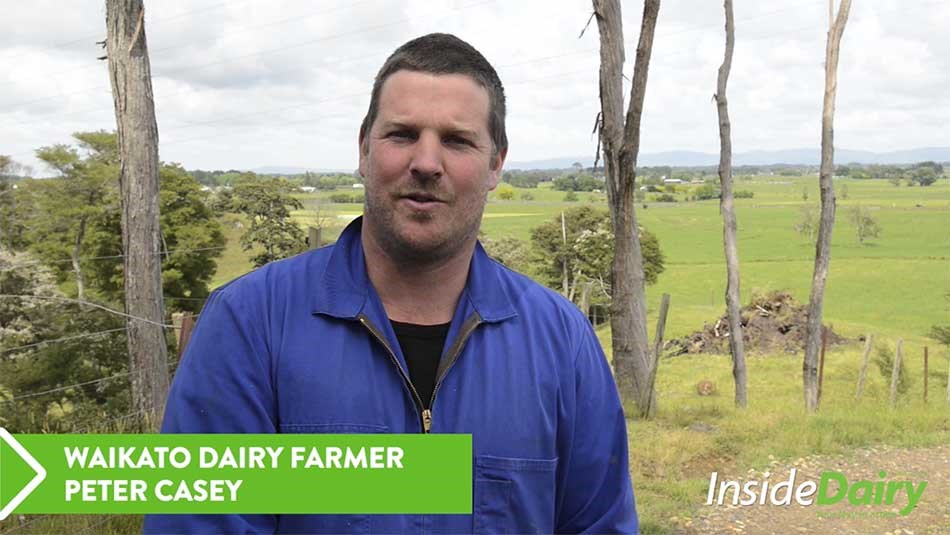 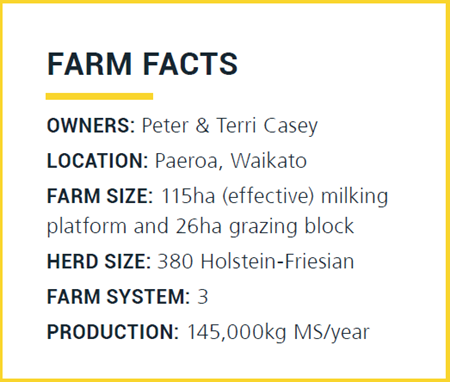 Peter Casey faced challenges with his herd’s reproductive performance from the day he returned to the family farm in 2006. But the problem became even more noticeable during a drought two years later, a tough time for everyone in the Paeroa district.

“We were short of feed, our young cattle were struggling, and we had a high ‘empty’ rate. This was taking a toll on the farm financially, and I realised that I needed to make changes.”

Peter had grown up on the farm but went off to work as a builder for seven years. When his dad wanted to step back from farming, Peter decided to swap carpentry for cows. His first challenge was to improve the herd's fertility.

Taking the bull by its horns

After chewing the problem over with Ken Cummings, a former LIC technician, Peter decided to change tack from ‘bull of the day’ to nominated sires.

“I began by studying the LIC catalogue and choosing bulls I liked. I usually choose six bulls for the team and the traits I pick are high fertility, easy calving and breeding worth. It’s a bit more expensive than ‘bull of the day’, but I think the extra cost has been worthwhile. Why would you put a low-fertility bull into a low-fertility cow? It doesn’t make sense,” says Peter.

“I’ve got to know the bulls, and now I look at heifers in the paddock and know whose progeny they are. It’s an interest I’ve developed and now enjoy.”

“Over the years, Peter’s stockmanship has improved and he’s proactive when it comes to treating his animals.” 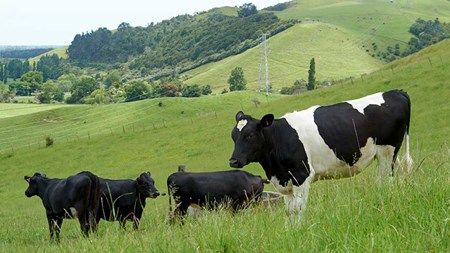 The Fertility BV of Peter’s rising one- and two-year-old heifers has increased to 1.5 and 2.0, respectively.

This treatment ranges from CIDRs (controlled internal drug release) for non-cyclers, to a regular vaccination and worming programme and liver tests to diagnose mineral deficiencies.

The number of non-cycling cows has lessened over time, says Peter.

“This year we only had 17, which is less than five percent of the herd.”

Rising to the top

As a result of these changes, Peter has seen his herd’s 6-week in-calf rate increase to 87 percent, putting the herd among the best in the country.

Peter says having 90 percent of heifers calving in the first three weeks brings gains apart from milk in the vat.

“They recover from calving quicker and, if grown well, cycle quicker. You also have options when more cows are in calf and you can sell surplus animals which helps with cashflow.”

Some of Peter’s animals are part of a DairyNZ-led research programme called Pillars of a New Dairy System*, in which researchers are seeking genetic solutions to improve cow health, fertility and longevity.

To test the robustness of the current Fertility Breeding Value (BV) and identify new measures of fertility, DairyNZ generated a unique herd of heifer calves with a 10-point difference in their Fertility BV (-5 percent versus +5 percent), known as the Fertility BV Animal Model. 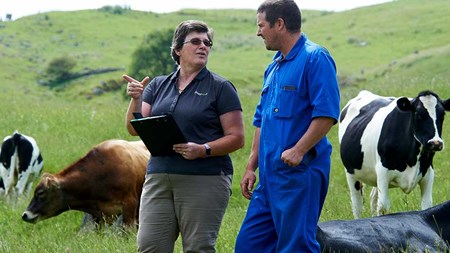 In 2014/15, some of Peter’s cows were contract-mated to provide low-fertility calves, and now his heifers are involved in ongoing studies to see if puberty could be an early measure to accelerate genetic improvement in fertility.

“The focus of the Fertility Animal Model is to understand and identify early and novel measures to accelerate genetic improvement in fertility. Our findings confirm that genetic fertility can contribute to high reproductive performance. Peter has increased the Fertility BV of his rising one- and two-year-old heifers to 1.5 and 2.0, whereas his lactating cows have a Fertility BV of 0.65.

“This illustrates the scale of the challenges and the opportunities for improving herd repro performance,” says Susanne. 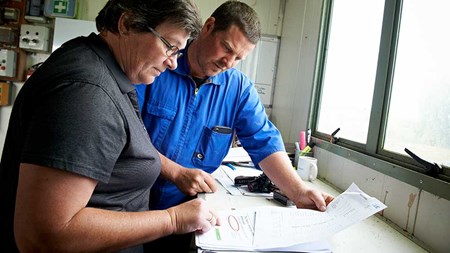 Peter says he’s impressed with the DairyNZ Pillars research as he didn’t fully appreciate the impact that quality young stock have on future fertility.

“You can see where your levy money is going. Sometimes there’s negativity about paying the levy, but when you see how detailed these projects are, from taking blood samples to the analysis and so on, it’s got to be a good thing for the sector.”

Improve the Fertility BV of your herd – if you nominate bulls, set time aside to study the catalogue. It’s worth it.

On top of the world in the King Country 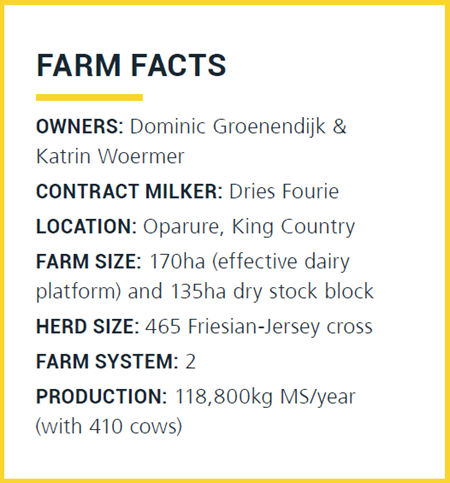 At Oparure, northwest of Te Kuiti, a steep limestone tanker track winds its way up to a 245m hilltop dairy platform.

This is tricky country for dairying and comes with its own set of challenges, says contract milker Dries Fourie.

“These challenges include paddocks up to 1.7km from the dairy shed, which means long walks for the animals. At one point, we had 80 cows in the lame mob,” says Dries.

“Getting good staff to work here was also difficult, especially when they saw the farm."

‘On a hiding to nothing’

The farm’s owner, Dominic Groenendijk, says over the years, he and Dries had tried to increase their per-cow production without success.

“We came to the conclusion that we were on a hiding to nothing. Dries and I had been talking about milking OAD or a couple of years but Dries was worried about the loss of production, and I didn’t want to force him into it.” 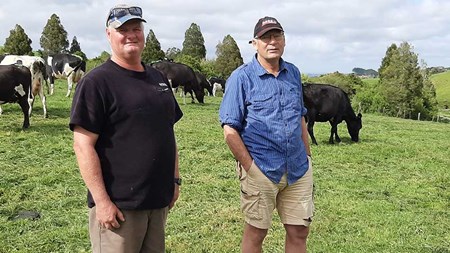 The tide turned in June 2018, when Dries and his wife Toi went to a DairyNZ-run once-a-day (OAD) milking conference in Palmerston North, keen to explore the pros and cons.

“Hearing from DairyNZ’s Dr Paul Edwards about the research and seeing the evidence he presented made the decision easy for us,” says Dries.

“Once we had the research at our fingertips, we decided it was a no-brainer. At that stage the cows were dry anyway, so we made the decision to start at the beginning of the 2018/19 season.”

For Dries and Dominic, the benefits of milking OAD have been numerous. On a personal level, stress reduction is at the top of the list.

“It’s really quite amazing how much more work we’re getting done,” says Dominic. “Two guys are not tied up for three-and-a-half hours in the afternoon and this gives us six extra hours in the day. Everyone is more positive too.”

There’s been a marked improvement in animal health. Cow condition has improved, and lameness has reduced. 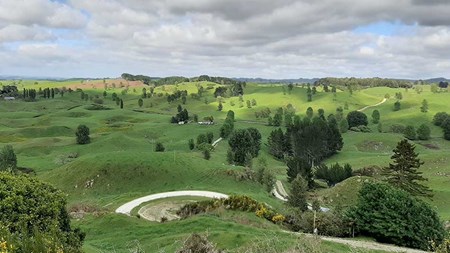 The King Country's volcanic hills offer a stunning view from the dairy.

“This year we dried off on June 6, whereas previously we dried off in May, so we’ve had a month’s extra production. Last season, we treated about 15 cows for lameness and this has reduced to five or six, so that’s a lot better too,” says Dries.

The most notable improvement has been to animal fertility and in-calf rates.

“We had a 6.8 percent ‘empty’ rate last year, compared to the previous year of 14 percent and our calving spread has improved too. The mean calving date was 14 days after the start of calving, which was eight days earlier than the year before, and the last cow that calved was 22 days earlier than the year before. This year, in the first three weeks, we had a submission rate of 93 percent,” says Dries.

Dominic says the reduced calving spread means their cows are in milk earlier and production is up 24 percent so far this season, albeit with 50 more cows. 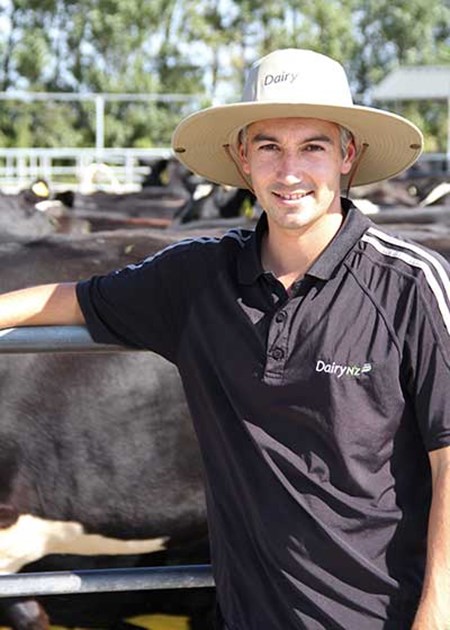 DairyNZ senior scientist Dr Paul Edwards has been evaluating OAD milking and its potential to improve the on-farm work environment.

“The biggest obstacle to going OAD was making the decision. For eight years we couldn’t get the per-cow production above 320kg MS/year, so we thought, ‘Let’s stop trying’. Now we look back and wonder why we didn’t start OAD sooner.”

This article was originally published in Inside Dairy February 2020

Read more online articles from Inside Dairy February 2020 or download your copy here.