A collaborative six-year programme researching how to reduce nitrate leaching on farm has won a Significant Achievement Award.

The DairyNZ-led programme recently received the Significant Achievement Award from the Canterbury Section of the New Zealand Institute of Agricultural and Horticultural Science. The award is sponsored by PGG Wrightson Seeds.

DairyNZ senior scientist Dr Ina Pinxterhuis says over 100 people and ten commercial farms have been involved in the science, development and farm application of the Forages for Reduced Nitrate Leaching (FRNL) programme identifying pasture and crop options farmers can use to reduce nitrate leaching. 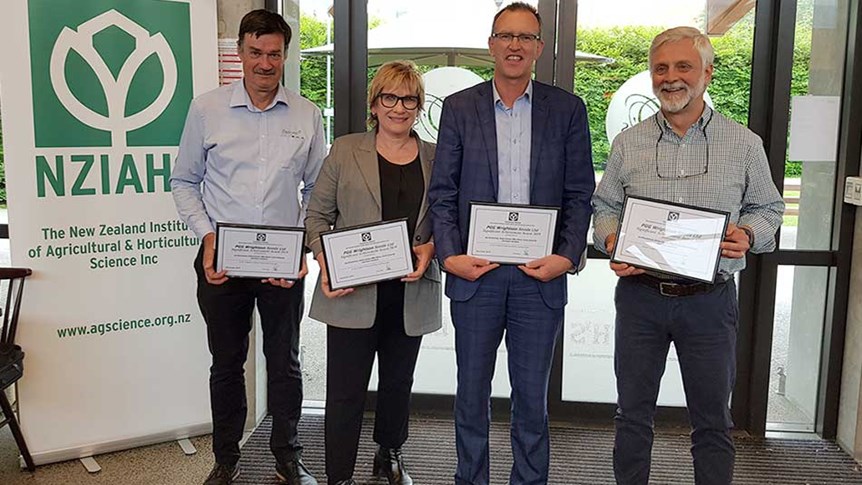 “We’re all extremely pleased to receive this award, and we are even more delighted to see that many farmers have been following the programme and have already adopted some of the lower nitrogen pastures, crops and practices into their farm systems to improve their environmental management.”

The programme drew on a cross-organisation team from DairyNZ, the Foundation for Arable Research, Lincoln University, AgResearch, Plant and Food Research, and Manaaki Whenua -Landcare Research. Eight PhD and post-doctoral students have been part of the programme along with several Honours and Masters students.

“We started in 2013 when farmers and the community were looking for better tools and farming practices that could help reduce nitrates in their systems and ultimately reduce any impacts on freshwater and groundwater,” says Dr Pinxterhuis.

As part of the programme farmers trialled a range of options to reduce their nitrogen leaching by 20 percent. Most of the farms – nine of which were based in Canterbury – achieved their targets, with some farms also managing to achieve even greater reductions in nitrogen losses.

“The options the farms used included planting low-protein feed crops such as fodder beet, and pasture species like plantain and Italian ryegrass which result in less or diluted nitrogen excretion by animals and more nitrogen uptake from the soil. The farms also planted catch crops like oats after a main crop to use up residual soil nitrogen through plant growth and reduce nitrogen leaching,” adds Dr Pinxterhuis.

The participating farmers also noted benefits from the joint learning in the programme.

Dairy farmer Tony Coltman made a number of changes including introducing fodder beet, reducing fertiliser use and using plantain on his Dunsandel farm. He was able to reduce the farm’s nitrogen losses by 36 percent over the life of the project, while cow numbers increased by five percent.

Mr Coltman says that he joined the project because he wanted to help finding a solution to reduce nitrogen losses. He says the results are, “giving us the confidence to start cutting back on nitrogen and changing the way we do things.”

Mayfield dairy farmers Grant and Jan Early were also part of the project. “We now understand the surpluses that come from nitrogen fertiliser and nitrogen in supplements, and how we can change those to make a difference,” says Mr Early.

The scientific output from the programme team has been high with 85 journal papers and 37 conference papers published on  programme projects.

On the ground, the results were shared with farmers, and options trialled through FRNL are now being applied by farmers in Selwyn and Hinds (Canterbury), Tararua (Manawatū-Whanganui) and Aparima (Southland) where DairyNZ is leading projects to support farmers to reduce their nitrogen losses.

“Many farmers are keen to adopt new ideas which lead to better environmental outcomes and there’s been a lot of farmer interest in FRNL across New Zealand. With the use of crops such as fodder beet and plantain already becoming more widespread, FRNL has provided guidance and confidence to farmers on how to use the crops and the benefits they provide. We expect that more farmers will adopt the practices trialled in this programme in the future,” says Dr Pinxterhuis.

FRNL is a DairyNZ-led collaborative research programme across the primary sector delivering science for better farming and environmental outcomes. The main funder was the Ministry of Business, Innovation and Employment, with co-funding from research partners DairyNZ (from its farmer levy), AgResearch, Plant & Food Research, Lincoln University, Foundation for Arable Research and Manaaki Whenua – Landcare Research.

FRNL scientists are now working with Overseer so it can model the practices used as part of the programme.