The painted rock hide-and-seek craze that has taken the world by storm over the past couple of years has popped up at National Fieldays. 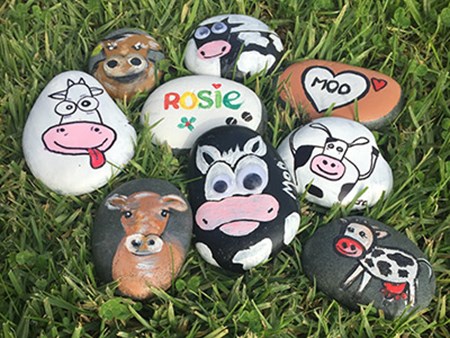 Prompted by the popularity of painting smooth pebbles and then hiding them for people to find, Rosie, the ‘cowbassador’ for New Zealand dairy farmers, has been busy in recent weeks decorating rocks that are hidden around the Heritage Village for children, in particular, to find.

The Rosie Rocks feature colourful dairy related images that are hand-painted – or is that hoof-painted?

Finders can be keepers, but Rosie urges children discovering a colourful rock to hide it again for others to discover, taking a photo of themselves with it first.  Or they can bring the Rosie Rock to the Old Schoolroom at the Heritage Village and exchange them for a small gift pack.

The global painted rock craze was started by people keen to make connections with others, which they do with special Facebook pages devoted to their particular rock, and via other forms of social media – and to get people into the outdoors.

Rosie says she wants her rocks to be a random act of kindness that will bring a smile to the faces of children attending Fieldays this year.

And she admits she hopes the rocks will also help draw attention to the Fieldays show she stars in at the Village Green, and to the fun-filled Old School Classroom at the Heritage Village where she will be hanging out with the kids in between performances.

Child-friendly activities at the classroom include Rosie’s Moovie Theatre, Rosie’s Moogical Corner, and the opportunity to check out her dedicated website www.rosiesworld.co.nz, along with information about the DairyNZ Schools and Farm Visits programmes.

Painted rocks are popular in many communities internationally and around New Zealand, including Hamilton, near the Fieldays venue at Mystery Creek Events Centre.  Hamilton City Council reports the fad has people out and about most weekends looking for Tron Rocks as they enjoy the city’s parks and the beautiful Hamilton Gardens.

Country and pop genres tied for a close second in the poll which asked farmers and staff what music they played at milking time and why.

Many responded saying they loved to have a good sing along as they milk their cows and that the cows seemed to like that too.

The survey showed that farmers care for their cows, their wellbeing and happiness, and Rosie applauds this.

Rosie says 1scientific studies found that when music of 100-120 beats per minute was played to dairy cows at milking time milk production increased.

1Studies include the Leicester School of Psychology study www.le.ac.uk/press/press/moosicstudy.html