Bill and Shirley Wright are sheep and beef farm owners from Cave. They were part of a network of farmers in Canterbury contributing to the direction of FRNL research, influencing priorities, sharing experiences and providing a practical check to research. 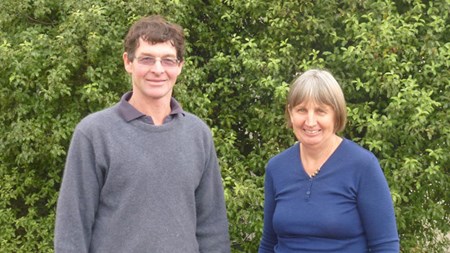 What are you getting out of the FRNL project?

“This programme offered the opportunity to progress our business and to learn best practise to reduce N leaching. As a dry sheep and beef property with dairy grazing the environmental impacts of our business were not yet fully understood. Profitability is driven by innovation and this programme provided that.”

"With the direction the industry is heading, legislation, catchment allocation etc. it’s important to have as much information as possible."

“Gaining understanding and appreciation for a) what we are doing now and b) what we can do going forwards.

The results of the programme inform industry on making better management and crop decisions to increase nutrient uptake and reduce run off.”

Summary of management and farm performance

The rainfall, soil types, plants and livestock all interact and result in nitrogen (N) leaching. For the years studied, N leaching losses on Bill and Shirley’s farm were low and moderately variable between years. Higher rainfall meant more dry matter production and more stock, which all resulted in greater leaching in better seasons.

The stand-out year was 2015/16. The low N loss estimate for this season was a result of variable weather which required continuously changing decisions. The summer was dry pre-December, so stocking rates were reduced early, but prolonged rains delivered substantial moisture later in the summer, so lambs were brought onto the farm in the new calendar year. As a result of the weather, pasture production decreased and this was not offset by crops and supplement, leading to a decrease in beef production by 38%. This contributed to a decrease of 27% in N leaching, compared with the previous season.

Total production and estimated N leaching were fairly similar for the other years.

Download the full report on the Sheep and Beef monitor farms, including the catch crop results, here.

The DairyNZ-led programme Forages for Reduced Nitrate Leaching – a cross-sector approach (2013-2019) provided new scientific knowledge, tools and technologies for forage production that can amount to more than 20% reduction of nitrate leaching from dairy, arable, sheep and beef and mixed-farming systems.
Thank you for submitting your opinion
Sorry, we could not process your request at this time. Please try again later.