Flexible milking is a ‘catch-all’ term given to milking intervals that sit between more traditional once-a-day (OAD) or twice-a-day (TAD) milking.

It refers to flexibility in both the timing of the milking during the day, as well as the number of milkings in a week. The most common forms of flexible milking are milking three times in two days (3-in-2) and ten milkings in seven days (10-in-7).

Information on this page has been gathered through experiments and from farmers already utilising flexible milking.

END_OF_DOCUMENT_TOKEN_TO_BE_REPLACED

We followed farms that used flexible milking strategies during the 2020/21 season. See their profiles where some have regular updates throughout the season and others have an annual summary.

END_OF_DOCUMENT_TOKEN_TO_BE_REPLACED

What prompted the Lincoln University Demonstration Dairy Farm’s move to full-season 10-in-7 milking? And what impact has it had on animal health, fertility, production and staff wellbeing? We speak with demonstration lead Jeremy Savage. Also on the episode is DairyNZ scientist Paul Edwards, who shares what the research is telling us about the effect of different milking intervals on milk production, fat and protein yields, and even sleeping patterns for farm staff.

Could reducing the number of milkings in a week help the dairy sector attract new staff and improve work-life balance? One farmer who’s gone to a flexible milking schedule is John Totty in Canterbury, currently starting his second full season milking 10 times in 7 days. What were his reasons for changing his milking schedule, and what kind of outcomes is he seeing?

Information on this page has been gathered through experiments and from farmers already utilising flexible milking. 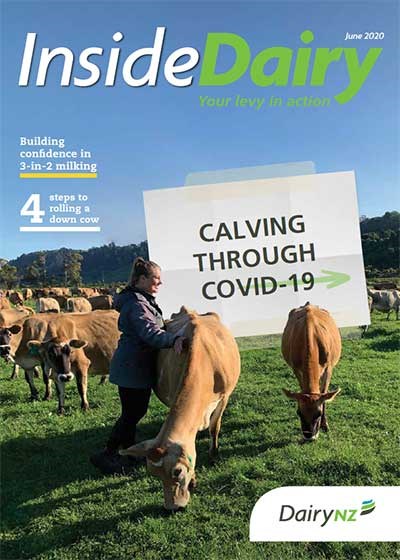 June's Inside Dairy is out now, and this month it focuses on calving.