Once-a-day (OAD) milking is the practice of milking cows only once during a 24 hour period. This differs from the traditional twice-a-day (TAD) milking regime.

OAD milking can be used either strategically (long-term) as the overall farming system or tactically as a short-term response to adverse seasonal conditions.

There are a number of reasons to consider OAD, the advantages of which will depend on the current farm system or layout e.g. long distances walked by cows.

The time you choose to milk can have a large impact on your cows and people, particularly during the hot summer period. Because cows feel the heat more than we do, if you feel hot in the shed, you can be sure they feel worse.

Kiwi dairy farmers have traditionally used 10-hour:14-hour milking intervals (e.g. 5 a.m. and 3 p.m.) to maximise milk yield while keeping relatively sociable hours. However, recent survey data indicates that at peak lactation, while 47 percent of farmers were using 10:14, 32 percent have adjusted their milking schedule to 9:15, with some extending this to 8:16. Research shows there should be no production loss with an 8:16 interval.

In many regions, it’s common to extend these milking intervals even further to milking three times in two days (3-in-2) or once-a-day (OAD). For example, in Northland, 31 percent of farmers milk full-season OAD; in Southland, 38 percent use 3-in-2 for part of the season.

When milking OAD, you can choose any time of the day to milk. The key message here is that there are a range of options possible, allowing you to choose milking times that best suit your team and avoid the summer heat.

Getting ready for autumn

In late summer, continue to manage pastures with good grazing management and think about pasture renewal. As autumn approaches, have a BCS plan and know what to do when rain breaks a drought. 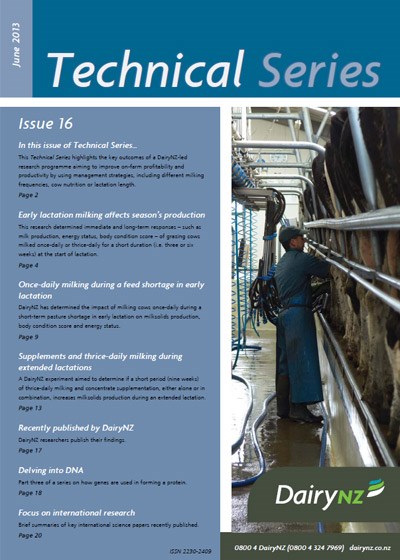