Brent and Maryn are arable farmers from Mayfield. They were part of a network of farmers in Canterbury who contributed to the direction of FRNL’s research, influenced priorities, shared experiences and provided a practical check to research. 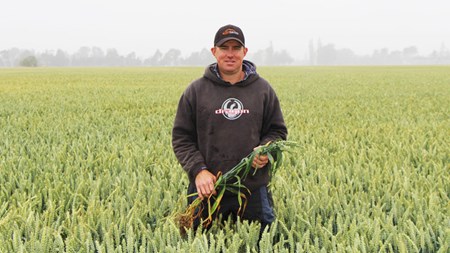 “The programme looked interesting and very relevant to what is happening with current environmental issues.”

"We all have to do our part to keep New Zealand’s “clean green” image for future generations and I see this programme as an important part to reduce N leaching into our waters."

“We should be able to farm with more confidence in the future by having more knowledge about N leaching and how we can reduce or mitigate our leaching. Hopefully we should be able to improve our cropping rotations to produce more from the same inputs compared to what we are currently doing.”

Modelling outcomes of two seasons on the farm identified the following factors that increased the amount of leachable soil N:

Leaching was greater when at least two of these factors were in play. For example, excessive N application to spring-sown crops resulted in high residual soil N at risk of leaching if no crops were sown after the summer harvest to take up the N. Similarly, mineralised N from residues retained in paddocks was available for leaching if there was no vegetation in autumn/winter to take up water and N to reduce drainage and N leaching.

When fertiliser N applications were modelled to match crop N demand (taking into account soil mineral N levels) without affecting yield and/or growing of catch crops, this resulted in a reduction in N leaching. These findings encouraged Brent to modify management in subsequent seasons. Demonstration paddock results supported the modelling of lower N fertiliser inputs and greater N use efficiency, and this translated into greater farm profitability and reduced N footprint.

Overall, results have shown that leaching is mainly influenced by rainfall through its impact on drainage, but farm management practices determine the amount of soil N at risk of leaching. Strategies that can reduce the amount of soil N available for leaching include: sowing catch crops immediately after the summer harvest to mop up residual soil N or N mineralised from soil organic matter and crop residues, and reduced N fertiliser use by calculating requirements with a recommendation system that accounts for soil mineralisation.