Eric and Maxine are arable farmers from Wakanui. They were part of a network of farmers in Canterbury who contributed to the direction of the FRNL research, influenced priorities, shared experiences and provided a practical check to research. 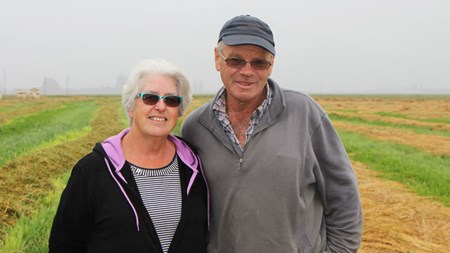 “It seemed like a good idea to make a controlled study of what good operators do.”

“If the programme provides good scientific data about how and when plants use N in its various forms, voluntary adoption of the resulting recommendations by the wider farming community is more likely, thus making any future regulation match good practice.”

Modelling outcomes of two seasons on the farm identified the following factors that increased the amount of leachable soil N:

Leaching was greater when at least two of these factors were in play. For example, excessive N application to spring-sown crops resulted in high residual soil N at risk of leaching if no crops were sown after the summer harvest to take up the N. Similarly, mineralised N from residues retained in paddocks was available for leaching if there was no vegetation in autumn/winter to take up water and N to reduce drainage and N leaching.

Heavy rainfall during the autumn period contributed to a high number of fallow paddocks in the 2014-15 season. The absence of vegetation to take up soil N, combined with the high rainfall resulted in high leaching losses. Reductions in N leaching on this farm were achieved by reducing the area of the farm in fallow for the subsequent seasons. It is important to note that the use of catch crops to mop up excessive soil N may not always be guaranteed because it is subject to weather conditions. Therefore, using fertiliser recommendation systems which calculate crop fertiliser N requirements that account for soil mineralisation could be a more reliable approach to reducing soil N at risk of leaching during autumn and winter.

Overall, results have shown that leaching is mainly influenced by rainfall through its impact on drainage, but farm management practices determine the amount of soil N at risk of leaching. Strategies that can reduce the amount of soil N available for leaching include: sowing catch crops immediately after the summer harvest to mop up residual soil N or N mineralised from soil organic matter and crop residues, and reduced N fertiliser use by calculating requirements with a recommendation system that accounts for soil mineralisation.