Managing body condition loss in early lactation is critical. Understanding energy and nutrient requirements of cows is crucial to preparing your herd for mating.

Loss of BCS in early lactation 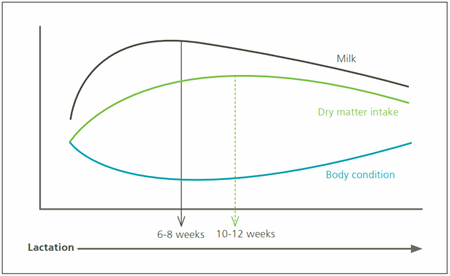 To provide the energy necessary for milk production in early lactation a cow mobilises large amounts of body tissue  (primarily fat, with small amounts of protein), which is reflected in a loss of body condition.

The greatest loss in body condition occurs in the first ten days after calving where cows can lose up to 0.5 BCS units. They continue to mobilise body reserves for approximately 8-10 weeks after calving, or until the point at which energy intake matches energy output.

Although increasing cow intake or reducing milking frequency post-calving takes several weeks before it has an effect on BCS, these management strategies can alter the point at which BCS loss ceases (nadir), and the rate of BCS gain after this point.

Cow genetics and BCS at calving have a stronger influence on BCS loss post-calving than nutrition or milking frequency during this period. The modern-day dairy cow is genetically predisposed to produce milk at the expense of body reserves during this period. In some cows, this can mean that 2-3 kg per day of body reserves are mobilised post-calving to support milk production.

Ideally, a cow should lose no more than 1 BCS unit from calving through to mating, with the aim to have all cows past the lowest point of energy balance and at a minimum BCS of 4.0 at the planned start of mating. This BCS profile will optimise milk production, while ensuring reproduction and animal health are not compromised. 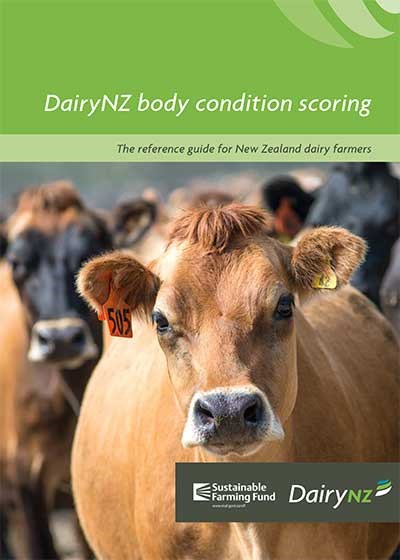 A companion to the DairyNZ Body Condition Scoring Made Easy field guide.

This section covers the nutrient requirements of dairy cows at various stages of lactation and how to meet those needs in a cost-effective manner.

In pasture-based systems, energy is generally the primary limiting nutrient during spring. If energy is sufficient, there is no production benefit of trying to balance a good quality pasture diet in spring.