Endometritis is an inflammation of the uterus, usually caused by bacterial infection, which persists beyond the third week after calving.

Recent research estimates an average of 25 percent of cows have endometritis about four weeks before mating starts, but there is a large and unexplained variation in the prevalence of endometritis among herds.

Endometritis is commonly diagnosed using a Metricheck™ device to examine material recovered from the vagina. This material is then scored on a 1 to 5 scale, ranging from clear oestrus-like mucus to thick foul-smelling pus. A score of 2 or more is used to identify 'dirty' cows with metricheck-positive endometritis.

During metrichecking, positive cows can be drafted and treated by your veterinarian. Treating infected cows, usually with intra-uterine antibiotics, will improve reproductive performance, but the treatment takes time to work. Uterine infections should be treated at least four weeks before mating starts. This gives affected cows the best chance of getting in calf early in the mating period.

The most at-risk cows are generally those that had an assisted or difficult calving, retained foetal membranes, twins, a stillborn calf, vaginal discharge after calving, or an abortion.  Endometritis is also more likely to occur in cows with a body condition score (BCS) of 4 or less at calving, cows with ketosis, or older cows.

But for some cows with endometritis there is no history of problems around calving. Therefore, whole-herd metrichecking is recommended, rather than just checking the ‘at-risk’ cows.

The best way to prevent endometritis is through effective management of the transition period, optimising BCS, and minimising the number of cows with diseases around calving.

Cows that suffer health problems around the time of calving or in early lactation can suffer reduced reproductive performance. 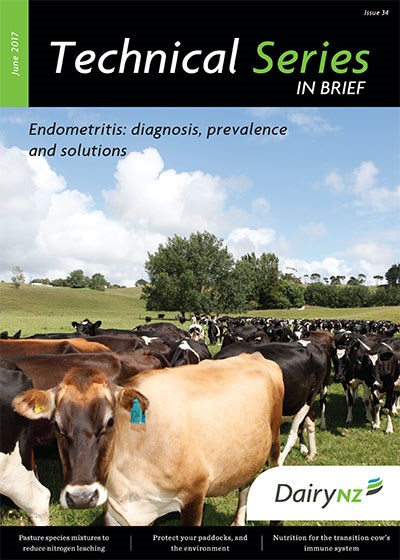