Nitrate poisoning is caused by high nitrate levels in feed and it usually occurs in late autumn or winter, particularly during a flush of growth after a dry period.

What to do if you see symptoms

Plants take up nitrate from the soil and then use energy from photosynthesis to convert nitrate to protein for growth. However, if nitrate uptake from the soil is greater than the conversion to protein, then nitrate can accumulate to abnormal levels. This can be caused by several factors: 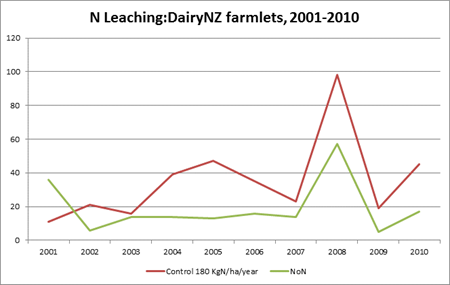 Soils high in nitrogen readily supply nitrate to plants, this can occur without the addition of nitrogen fertilisers.  Soils that have high acidity (lack of lime fertiliser), high N from white clover, sulfur or phosphorus deficiencies (lack of fertiliser); and low molybdenum also increase nitrate uptake by plants.

N fertiliser is only a very small piece of the puzzle and the other factors mentioned above (e.g. natural soil state, plant type and maturity, sunlight, rainfall, temperature, pests) play a much bigger role in the risk of nitrate poisoning. Nitrate poisoning was occurring on farms 60-70 years ago, when little N was used.

Spikes in nitrate levels can occur when seasonal conditions combine in the autumn and winter, particularly following summers and autumns that are drier than normal (see this graph of DairyNZ’s Waikato farmlets from winter of 2008 and the spike that occurred even for the Low N Farm, green line).