The National Animal Welfare Advisory Committee (NAWAC) has reviewed the existing code of welfare for dairy cattle and is consulting on updated minimum standards and best practice guidance as well as recommendations for regulations.

What you need to know

The key areas of change include (but are not limited to) body condition score, intensive winter grazing, shelter, provision of lying surfaces and limiting time on hard surfaces, calf rearing and end-of-life management. Some of the changes proposed could be significant for our sector.

We know caring for cows and ensuring they have a good quality of life is a core part of being a dairy farmer, so having your say on the proposed changes is important and we want to support you in doing so.

DairyNZ has reviewed the science and collated feedback from the online survey as well as national and regional farmer meetings.

How you can make a submission

To support farmers in making their individual submissions to MPI, a template of DairyNZ positions on the key proposed changes is now available below. The template is editable, and we encourage you to change and add detail to reflect your views. We appreciate this template is quite technical, but we wanted to support you in navigating the extensive changes being proposed.

Submissions should be emailed to: animal.consult@mpi.govt.nz by the deadline.

Remember: the template provided only contains the key proposed changes, you can read the full proposed code here. We will continue to work on a more comprehensive DairyNZ submission which will cover all of the proposed changes.

Please be aware that any submission becomes public information and can be requested under the Official Information Act 1982.

Why the code of welfare has been reviewed

Under the 2018 'Framework for Action on Animal Welfare', NAWAC is reviewing all codes of welfare. Since the last review of the Dairy Cattle code of welfare in 2008, our understanding of animal welfare has developed and this does need to be considered and incorporated into the revised code. Changes to the Animal Welfare Act in 2015 included recognising animals as sentient – meaning they have the ability to experience positive and negative emotions. It is therefore important to reduce negative experiences animals are exposed to and provide opportunities for positive experiences.

DairyNZ has been part of the sector working groups that have provided feedback on the proposed changes. To date, NAWAC has only incorporated a small amount of this feedback into the proposed new code of welfare.

What NAWAC must consider when reviewing a code of welfare 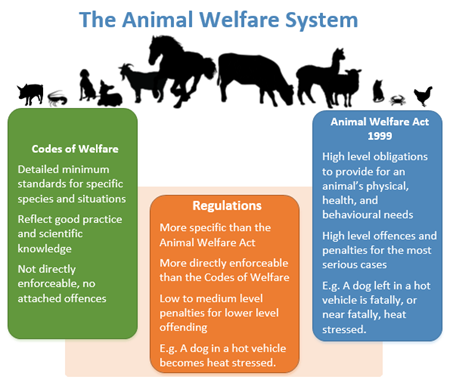 When the National Animal Welfare Advisory Committee (NAWAC) reviews a code, it must consider good practice, available technology and scientific knowledge. It may also consider any other matters that are relevant, such as practicality and economic impact.

The proposed new code of welfare has been evaluated to identify changes required to ensure that the minimum standards will protect the welfare of dairy cattle in accordance with the purposes of the Animal Welfare Act.

Owners and people in charge of animals must comply with:

Outlined below are the key proposed changes to minimum standards (MS) and regulations (Reg). This is not a comprehensive list of all the new or proposed changes to minimum standards and regulations, it also does not include example indicators (EI) and recommended best practice (RBP) standards. For this reason, it is recommended that you also read the full draft code.

Note: some proposed MS have also been recommended to become regulations. Other regulations are standalone.

To view the proposed new code of welfare for dairy cattle, the regulations, and to make a submission, visit the MPI website.