Pests and diseases of brassicas

Pests and diseases of brassicas

Find out about the most common pests and diseases that are found in brassicas. For more information about these pests and other common agricultural pests and how to control them, see the AgPest website.

What are the common pests of brassicas? 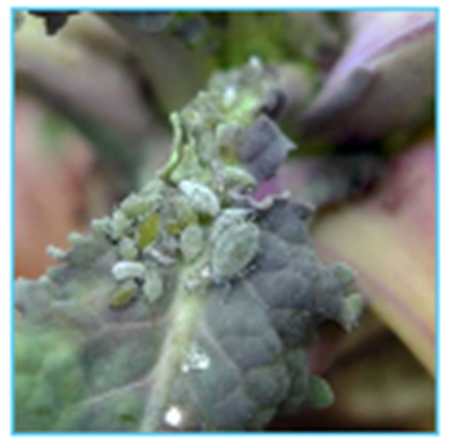 The most common aphid that affects brassicas is the cabbage grey aphid. It is found throughout New Zealand, and affects all types of brassicas. Aphids appear greyish/white due to a protective waxy powder, and dense colonies occur on the underside of leaves.

Aphids feed by sucking plant juices; this causes yellowing and curling of leaves and seed heads, followed by wilting and stunting of plants, particularly during hot dry weather. Heavily infected crops may be unpalatable to stock. Cabbage aphids also transmit viruses e.g. cauliflower mosaic and turnip mosaic viruses; these cause reductions in crop yield, and often death of plants. Symptoms of viral infection include crinkling and distortion of foliage and stunted plants.

There are several insecticides used to control aphids. If using a spray, these should be applied as early as possible to prevent aphid build up. Removing weeds such as wild turnip that act as hosts for cabbage aphid can assist in limiting damage.

While not as common as cabbage grey aphid, another type of aphid that can affect brassicas is green peach aphid – see management practices for forage brassicas for more information. 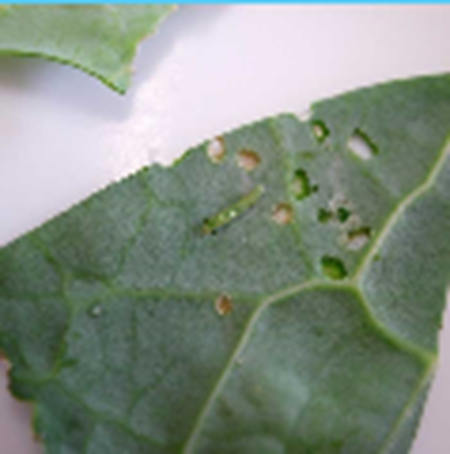 Typical pattern of leaf damage caused by diamond back caterpillars

The diamondback moth is found throughout New Zealand, and feeds on all types of brassicas. They are most prevalent in warm, dry seasons. The moths are about small, greyish, and primarily nocturnal. They can be recognised by the diamond shaped pattern on their wings while at rest. The caterpillars are 8-12 mm long and vary from light brown at hatching to dark green at full maturity.

When the caterpillars hatch, they burrow into the leaf and feed on the tissue inside the leaf.

As they grow they emerge to feed on the lower leaf surface leaving the upper surface intact; this is what distinguishes their feeding from that of cabbage white butterfly caterpillars. Diamondback moth can cause significant damage to a crop, so is important to inspect the crop regularly to allow detection of the caterpillars when they are small and select a suitable treatment before damage reaches a high level.

There are two wasp species and a fungus that are biological control agents for diamond back moth. These usually exert a high level on control over caterpillars in the North Island but are considered less effective in the South Island.

The main species is the European leaf miner. The larvae live within the leaf tissue, and create tunnels. Larvae are particularly prevalent in turnips in autumn, and are often responsible for yellowing and loss of mature leaves. Pest damage can be minimised by maintaining a good crop rotation, using insecticide at sowing, or using treated seed. Nysius fly is found throughout New Zealand, but it is particularly common in warm, dry areas. The adults are often noticed on bright days when sunlight reflects from their wings giving them a silvery appearance.

Nysius fly can be very damaging to germinating brassica crops, especially if the crops have been direct drilled. Damage to brassica plants is caused by feeding punctures made around the base of the plants. While plants are small this can directly cause plant death. With larger plants, this feeding causes cankerous tissue growth or stem restrictions, which causes production losses, and makes the plants more susceptible to breakage. In severe cases, the plant may die.

There are several insecticides registered to control nysius fly. As damage to newly emerging seedlings has the most potential to devastate crops, paddocks should be inspected before sowing, and appropriate action taken. A rule of thumb is to consider control if three or more can be seen in a 10 by 10 cm area. Post emergent spray can be used in response to damage, but damage to the crop will have already occurred, so any control used should be applied as early as possible. 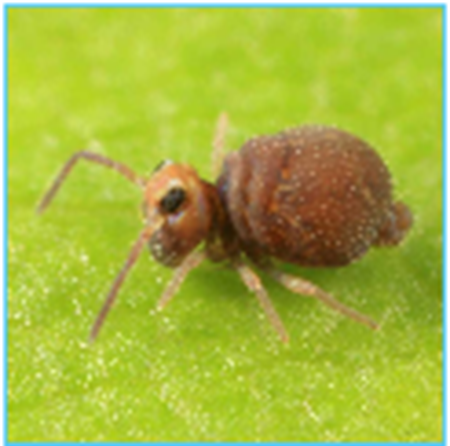 There are several species of springtails found throughout New Zealand. Springtails are brown insects about the size of a pin head that will jump when disturbed. They are detected most easily by placing a white card or cloth on the ground, before gently some soil onto the white surface.

Springtails can damage brassicas (and fodder beet) as soon as the seed coat is split and the cotyledons begin to emerge; this means that the seedlings can be damaged before emergence. Initially the stems are attacked, but as the seedlings emerge from the soil scalloping of leaf edges, small pits and holes in the leaves become evident. Damage can occur until the fourth leaf stage.

Using treated seed and routine spraying can be worthwhile, and if springtails have been a problem in the past, inspection of the soil to be sown should be taken prior to sowing. If significant damage occurs, an insecticide should be applied as soon as the damage is noticed. If the damage is only minor, the plants may soon outgrow the impact of springtail feeding. 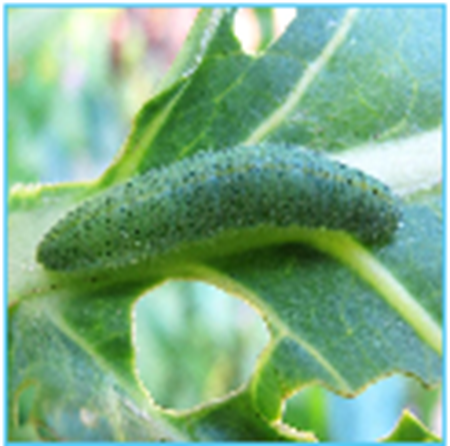 The white butterfly is found throughout New Zealand, and feeds on all types of brassicas. Butterflies are white with one or two black spots on their wings, while caterpillars are green with a narrow orange strip down their backs. While small, the caterpillars feed on the surface tissue of leaves, but as they grow they eat through the leaves causing large irregular holes. This pest is active during the summer.

While the damage caused by caterpillars is noticeable, is seldom severe. However, when combined with damage from other pests, some form of control may be warranted. Inspecting the crop regularly will allow detection of caterpillars while they are small and allow treatment before severe damage occurs.

What are the common diseases of brassicas? 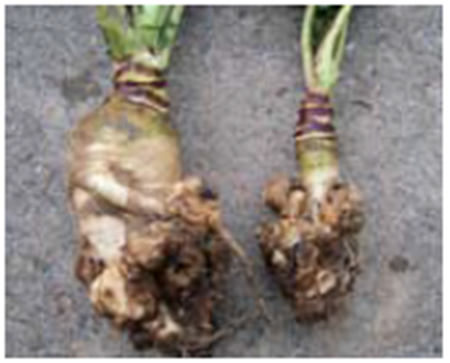 Club root is caused by the fungus Plasmodiophora brassicae. Club root develops when this fungus invades the roots and stimulates cell division and growth. This forms a “club”, which interferes with root function; this restricts water and nutrient uptake. Plants often appear wilted and stunted, and will eventually die, releasing dormant fungal spores into the soil. These spores can infect other brassicas, and can be transferred by machinery and stock. Dust, water, and infected seedlings also spread club root.

Club root is mainly confined to heavy soils and areas with heavy rainfall, and its effects are worse in acid soils. Crop rotation and hygiene are important for brassica crops in high-risk areas. Tolerant cultivars are available. 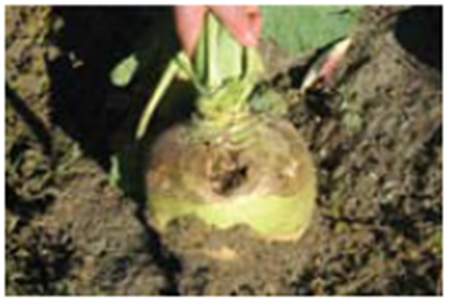 Dry rot or black leg is caused by the fungus Leptosphaeria maculans. Dry rot is mainly a problem in swede crops, but it can affect other brassicas to a lesser extent. The symptoms on leaves are small sunken brown to grey circular spots that are covered with tiny black spore bodies. Similar lesions appear in brassica bulbs, especially in the neck region. Dry rot can cause death to small bulbs.

Dry rot is usually an airborne disease, but it can occasionally be seed borne. The primary infection is from diseased organic material, and the initial symptoms are small, circular lesions on young leaves. Wet, windy weather favours the spread of secondary infection by rain splash, as well as physical contract between fallen leaf material and stem/bulb.

Dry rot can be particularly bad when a crop is sown into an area with a lot residue remaining from a previous brassica crop; this should be avoided. Control of dry rot is usually through crop rotation, hygiene, and tolerant cultivars. 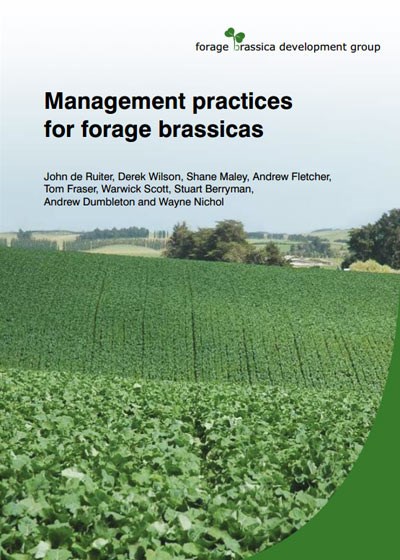 Information about growing different types of crops on your farm, wintering, and forages that reduce nitrate leaching.

Kale is normally used as a winter feed crop. With a deep root system; it has good drought tolerance.

Swedes are normally used as a winter feed crop. As they have a low tolerance to drought, swedes perform best in cooler, moist environments, however they do not like waterlogging.

Turnips are a brassica root crop commonly used as a fast-maturing single-graze crop to bridge a summer feed gap and maintain milk production.