Down cows ‘tip of the iceberg’

Down cows ‘tip of the iceberg’

Waikato farmer Peter Miedema and his InCalf Adviser Katrina Roberts explain how down cow issues led to the uncovering of a widespread magnesium deficiency in his herd. 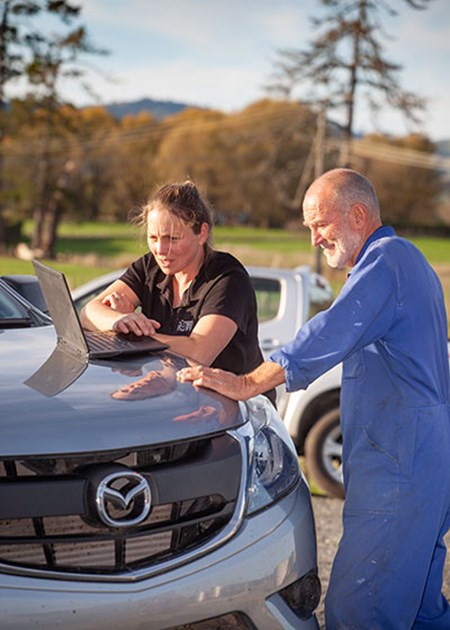 Like most farmers, Peter and his wife Diane supplement their herd with magnesium during the late dry period and in early lactation. This widely used practice is based on research confirming magnesium plays an important role in reducing the incidence of milk fever.

“We did blood tests when the cows were dry in June 2019,” says Peter, “and the magnesium levels all came back on track. Older cows had an average of 0.9 mmol/litre, while heifers and lighter cows were 0.95 mmol/litre.”

In August 2019, in early lactation, Peter and his contract milkers, Dan and Sarah Barlow, decided to graze the milkers on some new grass they’d had to sow late, due to no rain until the end of April. Then the first signs of trouble appeared.

What was going down?

The Miedemas had a couple of milking cows go down in early August 2019, and another cow went down with ketosis. “All the issues were in the milking cows – we didn’t have any problems with calving cows,” says Peter.

Peter, Dan and Sarah had their usual pre-mating meeting with their Anexa vet and InCalf Adviser Katrina Roberts, on August 25. At that stage, they thought the handful of down cows were isolated incidents. “We talked about the usual stuff with Katrina: how cow condition was tracking, a review of how calving went, setting up for mating, and about the new grass that was getting too long and still hadn’t been grazed properly. A couple of days later, we started break feeding the new grass with the milkers before afternoon milking, with no apparent issues for a while,” says Peter.

Not too long after that, Katrina says another vet had confirmed a case of grass staggers (or ‘grass tetany’) in another cow as a result of hypomagnesaemia (low magnesium levels). This prompted further blood testing, which returned herd level results for magnesium well below acceptable levels (less than 0.6 mmol/ litre). “So, the conversation during my August consult with the team was, ‘We’ve got new grass that’s high risk of low magnesium – so let’s dust the new grass break as well’.”

From the middle to the end of September, a couple of cows then presented with what seemed to be grass staggers, “but it seemed a bit different”, says Peter. Those two cows were treated and then, on October 4, another cow did the same. “That one was the same cow that had appeared to have ketosis back in August,” he says. “So, we carried out further blood testing.”

Katrina says the October 2019 round of blood samples taken from both the heifer mob and the cow mob returned very low magnesium results, considering the cows were in peak milk and the perennial mature grass was being dusted with Causmag (magnesium oxide) and lime flour at adequate levels once a day. 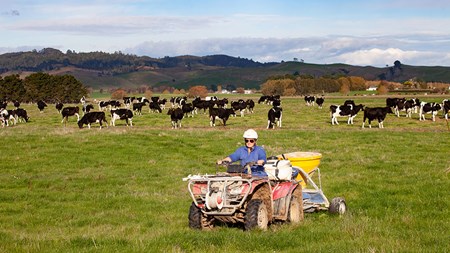 Dusting the paddocks with Causmag twice daily (instead of once) was one solution to the problem. Photo: Zing Photography/Anexa.

Peter says they wondered whether one reason for the issues could have been high levels of potassium (K) in the soil (as the K would have increased the risk of hypomagnesaemia in the cows). They also speculated whether a bout of wet weather at the time had washed some of the magnesium off the new grass.

Given so many unknowns and variables, Peter and the team introduced multiple methods to get magnesium into the cows. These included dusting their paddocks with equivalent amounts of Causmag twice daily (instead of once) and adding about 20 percent of their daily Causmag to the palm kernel expeller in the mobile feed troughs.

“We also looked at the type of Causmag we’d been using for dusting and decided to buy another brand on October 16 from a different source. We started adding 80g/cow/day of magnesium chloride prills into the cows’ water trough system too, using a Peta dispenser – as we don’t have a dosatron,” he says. 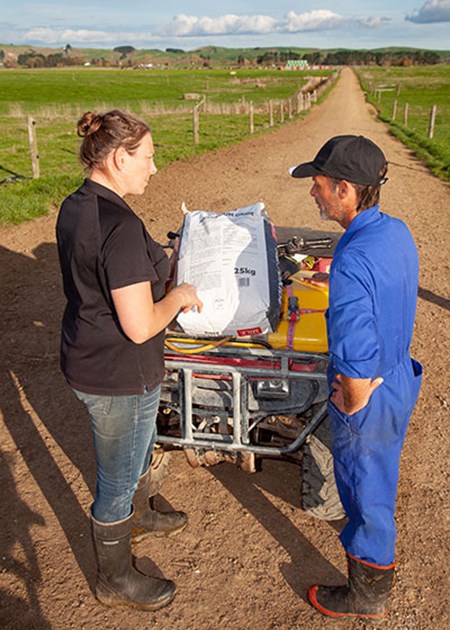 Their efforts paid off and in a third round of testing on October 29, they found both mobs’ magnesium blood levels had returned to near target levels. Even though these issues occurred right in the middle of the first round of mating, their 6-week in-calf rate ended up being 75 percent (almost at their target of 78 percent) and the cows milked well through the peak.

“The low magnesium issues on this farm occurred in early lactation, rather than at calving where we usually see metabolic issues,” says, Katrina. “There are often many factors involved in preventing milk fever and grass staggers, which means it’s a combination of factors that has the positive effect, rather than just magnesium use. This is a good example of why it’s really important to investigate further.”

If you spot issues with just one or two cows, don’t assume they’re isolated cases: they could be the ‘tip of the iceberg’, indicating a larger underlying problem, says Katrina. “The bottom line is that if calculations on paper aren’t adding up to what you’re seeing, you need to do some more investigating – looking at all the risk factors.”

Peter says a key learning from the experience has been recognising the need to monitor how magnesium levels are changing throughout the season, if unexplained issues keep coming up. “Otherwise you won’t know what’s happening. So if you have any issues with animal performance, do what you can to identify potential issues earlier.”

Transitioning cows from pregnancy to lactation

Magnesium supplements are just one part of the picture when it comes to getting cows through this challenging period.

All cows in the herd need be supplemented with magnesium pre- and post-calving:

See our checklist for the full range of tips and guidelines for transition cows.

In recent years, concern has been raised over specific types of magnesium supplements and whether they are associated with an increased occurrence of salmonella. This has led to DairyNZ updating its guidelines. Katrina suggests talking to your vet about this issue to ensure you’re selecting the correct type, quality and quantity of magnesium needed for your herd.