The time each cow takes to milk out is one of two farmer-controlled factors that determine the total time needed to milk the herd.

There are several opportunities to refine milking machine settings or implement management strategies. The milking duration of the cow can be reduced by either option below:

1. Optimise the milking machine to harvest milk more quickly by:

2. End milking early by either or both:

Why applying a maximum milking time is so effective

Within a herd there is considerable variation in the amount of time a cow takes to milk. This duration is correlated with milk yield, but there are other contributing factors, such as cows that take longer to milk are not necessarily the highest producers.

This variation presents a challenge for optimising milking efficiency; in a swingover herringbone the entire row is held up by the slowest cow(s). Cupping slow milking cows early does not help significantly unless by chance the cow on the other side of the pit, before or after, has a shorter milking duration.

In a rotary, a slow milking cow only occupies a bail rather than the slowing the whole row but this bail could be utilised for a new cow. Note that reducing go-around cows by slowing the rotary platform does not reduce herd milking duration, see the milking routine page for more explanation.

MaxT for your farm dairy

Leave milk in the udder without compromising production or udder health

Leaving residual milk in the udder goes against a long-held industry belief that it will cause lost production and mastitis. In short, the residual milk is retained to the next milking where it can be harvested faster.

Milk is held in two compartments of the udder; the cistern (a bag above the teat) which holds roughly 20% and the alveoli (the cells where the milk is made) which holds the other 80%. When clusters are attached, the milk harvested in the first few minutes is from the cistern, then the milk ejection or let down reflex is triggered. This causes the remaining milk to move from the alveoli into the cistern where it can be harvested by the machine.

Research has shown that the milk flow curve changes after cows have had their milking shortened. At the next milking there is an increase milk flow rate early in the milking and also at peak milk flow, likely due to there being more milk in the cistern. This increases the average milk flow rate allowing the same amount of milk to be harvested in a shorter duration.

This concept is explained in the animation below: 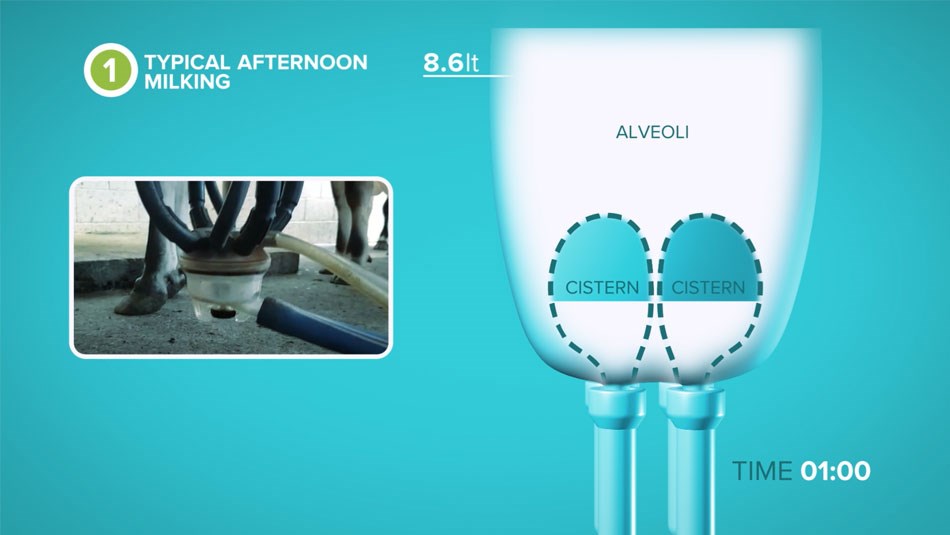 Maximum milking time (MaxT) is a strategy backed by research and farmer experience, but a handful of persistent myths continue to prevent some from giving it a go.

Take a walk through time and find out where the MaxT concept came from.