This step-by-step guide explains the basics of implementing a maximum milking time (MaxT) in a rotary dairy.

The MaxT strategy is where cows are milked to a pre-determined time based on their milk volume, resulting in less time in the dairy for staff and cows, without affecting milk production or udder health.

There are three steps to implementing MaxT - calculate, implement and monitor.

The first step is to determine your MaxT time. The easiest way to do this is to download DairyNZ’s Milksmart app. By entering the number of litres from the tanker docket, the number of cows going in the vat and your milking start times, the app will calculate the average milk volume per cow for each milking, and the appropriate MaxT time for this volume.

Alternatively, use these tables to calculate your MaxT time manually.

Note: Farmers implementing MaxT for the first time have found it easier to start with using the morning MaxT time and monitoring at cups off as per Step 3. 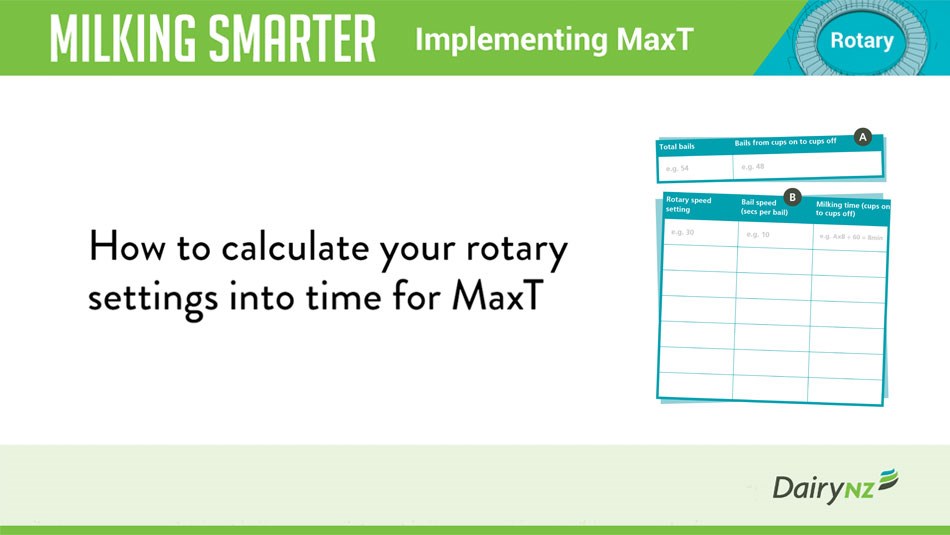 Once you have your MaxT time the next step is to implement it in the dairy.

The final step is regular monitoring. Once a week at an afternoon milking monitor five groups of 10 cows.When monitoring, look at the cows at the cups-off position (i.e. once the cluster has been on for the MaxT time. 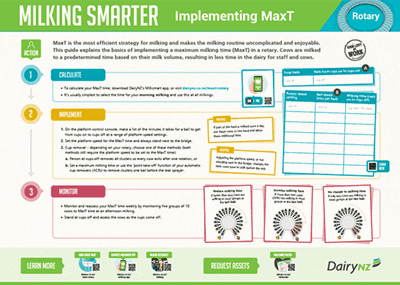 Rotaries make up about 30% of farm dairies in New Zealand, and have become popular due to milking efficiency in larger herds.

Handy download giving you the basic steps for calculating MaxT for all dairy types.