Most pregnancy losses occur in the first week after breeding

Most pregnancy losses occur in the first week after breeding

The average first-service conception rate to insemination is about 54% in NZ herds. A recent AgResearch-led study* indicated that fertilisation failure and impaired embryo development in the first week after breeding are key factors limiting conception rates in our systems.

The two-year study of approximately 1900 cows investigated the timing and sources of pregnancy failure that could be addressed to improve conception rates. It also examined possible risk factors for pregnancy failure, such as body condition score, pre-mating cycling, days since calving, age, and milk yield.

Four farms# in Taranaki, Waikato and Northland were involved during the 2014 and 2015 breeding seasons.

At mating start date, cows were allocated into one of four groups to examine pregnancy losses at either 7, 15, 28-35, or 70 days after first insemination: 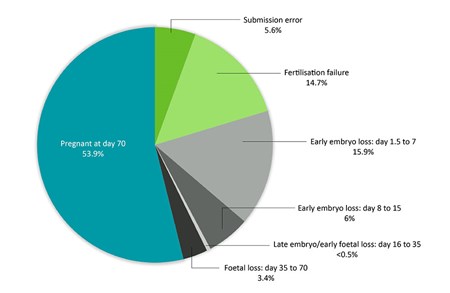 The data was used to determine the key causes and timing of pregnancy failure as presented in Figure 1.

The results indicated that most cows are submitted for AB at the right time, but almost 6% of animals are inseminated when they are not truly on heat (i.e. submission error). Another 15% of cows have fertilisation failure, which leaves 80% of cows likely to conceive to their first insemination.

However, most pregnancies are subsequently lost during their first week. Inspection of embryos flushed at 7 days old indicates that 16% of cows inseminated have embryos that either stopped developing or are of poor quality and unable to maintain a viable pregnancy. A further 6% of cows have pregnancy failure due to impaired embryo development between 8 and 15 days after insemination.

Therefore, 64% of cows have a viable pregnancy at 7 days following insemination, but this reduces to about 58% at 15 days.

Few pregnancy losses occur between 2-5 weeks following first insemination. Ultrasonography indicates that about 58% of cows have a viable pregnancy (foetal heartbeat) at days 28 and 35.

In contrast, studies in housed North American cows indicate a large pregnancy loss of 20-30% between 2-5 weeks, highlighting that solutions developed to increase conception rates in overseas animals may be inappropriate for NZ cows.

The recent NZ study also indicated that further foetal losses occur between 5 and 10 weeks, resulting in 54% of cows still pregnant at day 70. These losses are associated with long return intervals.

Based upon a previous NZ study, an additional 3% of cows experience late foetal loss after 70 days, which would leave a final 51% of cows calving to an insemination.

The study demonstrated that the number of days since calving and the number of heats a cow has before she is bred significantly affects her likelihood of a successful pregnancy. The chance of conception increases by:

When cows are inseminated less than 42 days after calving, they have 3 times more fertilisation failure, which results in lower conception rates. It is likely that these later calving cows are inseminated on their first heat when they are in negative energy balance and their uterus has not fully recovered. In fact, the study indicated that cows bred to first or second heat have 5 times greater fertilisation failure and poorer quality embryos relative to cows bred to third or later heats.

It also supported that there is little point inseminating cows less than 23 days after calving as they have no chance of conceiving.

Most conception losses in NZ grazing cows are linked to fertilisation failure and impaired embryo development during the first 7 days after insemination. Aiming for 88% of the herd calved within six weeks, improving transition cow management, and meeting body condition score targets at calving and mating will improve conception rates by increasing the number of heats before breeding. There are also future opportunities to improve conception rates through science-based solutions that improve egg quality and the early maternal nurturing of a fertilised egg in dairy cows.

*This study was funded by NZ dairy farmers and by MBIE through the “Pillars of New Dairy System” partnership programme, with additional funding received from AgResearch.

#Fonterra is gratefully acknowledged for the involvement of their farms in this study. 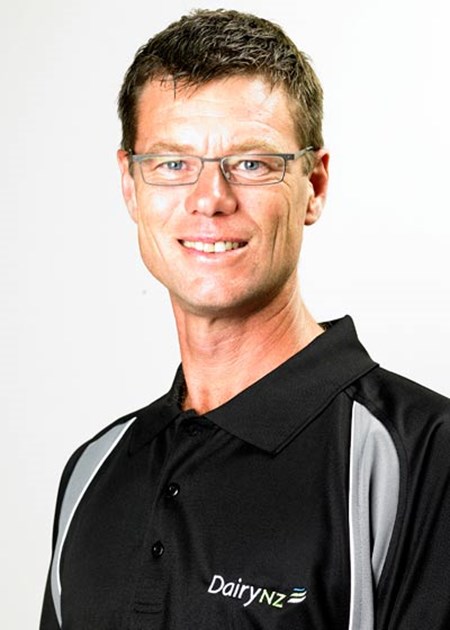 Better oocytes in our sights

DairyNZ researchers have been investigating ways to improve oocyte (egg) quality, with the end goal of lifting conception rates in New Zealand dairy herds.
Thank you for submitting your opinion
Sorry, we could not process your request at this time. Please try again later.